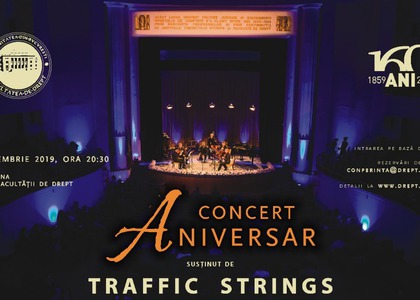 Thursday, 21 November 2019, at 20:30, Traffic Strings will hold a concert in the Aula Magna of the Palace of Faculty of Law, to celebrate 160 years since the founding of the Faculty of Law at the University of Bucharest.

The programme of the Traffic Strings concert dedicated to the 160 year anniversary of the founding of the Faculty of Law at the University of Bucharest is made up of, in a mosaic-like structure, some of the most well known and sensitive musical pages, already belonging to the affective memory of the consumer of good music from any generation.

Starting with the first movement of the Autumn concerto, part of the well knownFour Seasons by Antonio Vivaldi, the instrumental group TRAFFIC STRINGS proposes to the public Gnossienne No.4, a musical score which will bring the flavour of mystical colour specific to the composer Erik Satie, after which the stage evolution of the group will bring rhythms of Iberian origins through the piece La bodade Luis Alonso by GerónimoGiménez.

The fourth piece of the evening will bring to the forefront the emotion of film music through Gabriel`s Oboe, composed by Ennio Morricone for the soundtrack of the film The Mission. The concert's programme will turn yet again towards the rhythms of Spanish music with a piece of high instrumental virtuoso, Fantazia Carmen, based on the themes from the opera Carmen and composed by the violinist and composer Pablo de Sarasate.

For a couple of songs that follow in the programme there will be a stylistic jump towards jazz music. Jazz, a musical genre with harmonies and specific rhythms, will be brought forth through a unique version, the sonority of the pan flute and of the string instruments, together with those of the piano and percussion, will intertwine in the hope it innovates through a unique mix orchestrated in a version of all their own.

Thus, David Clayton Thomas' Nuclear blues and Mother`s Finest Baby Love will be performed, followed by Consolaçăoby the composer and performer Baden Powell who will introduce the audience to the refined intimacy of Brazillian jazz.

The tone will change with Bloodsucking leeches, a jazz-rock piece created in the 80s by Steve Moorse. The composers Herbie Hancock și Chick Corea are also in the line-up of the programme, two representatives of quality jazz, with a medley marked by multiple cultural interferences through the unification of the piece Take Five with the rhythms of Romanian music from Maria Tănase's repertoire, followed by the harmonies of a well-loved composition, Mission impossible, belonging to the genre of film music.

Also part of the concert programme are two tango composers, Carlos Gardel with a piece from the soundtrack of Scent of a Woman, as well as Astor Piazzolla with a presto from the piece Michelangelo 70 which will liven up the end of the concert.

The orchestral arrangements of the scores already listed are made for this type of instrumental band by the violinist Lucian Moraru (who is, at the same time, the producer of this instrumental group).