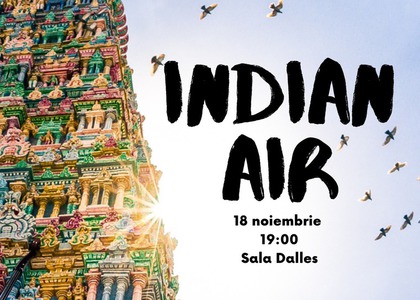 Images, fragrances, colours - all the richness of the East encapsulated in sounds.One of the European masters of the woodcock, the Austrian instrumentalist Klaus Falschlunger, is the protagonist of the"Indian Air" concert which will take place on Monday, November 18th, at 7 p.m., at Dalles Hall (Nicolae Bălcescu Boulevard, No. 18) in Bucharest."Indian Air" is an original concept that brings together jazz and world music, which was developed by Klaus Falschlunger along with two other Austrian musicians who have become experts in world music instruments, Clemens Rofner (bass-ukulele) and Tobias Steinberger (bendir / kanjira - percussion instruments from the drums and tambourine family). The event is organized by the Rabindranath Tagore Indian Cultural Center, through the Jazzmine World project, with the support of the Austrian Cultural Forum and Cărtureşti.

During the "Indian Air" concert, the three artists will offer an introductory workshop on the use of oriental musical instruments. "Indian Air in Cărturești, with music and stories "will take place on November 17th, at 5 p.m., in Cărtureşti Verona (Painter Arthur Verona Street, No. 13-15).