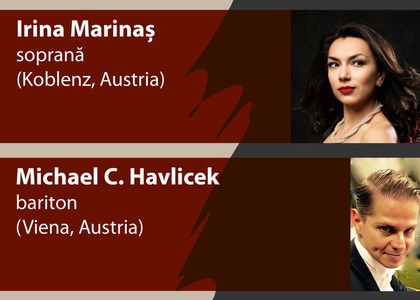 Timișoara, November 22, 2019 - The 8th edition of the Viennese Ball, a charitable event, takes place in Timișoara on Friday, November 22. The event has become a tradition for the holiday season in Timișoara. Being under the high patronage of Austrian Embassy, the Viennese Ball from Timișoara is the 31th event of this kind that is internationally recognized by the Vienna City Hall because it succeeds in recreating the original opera ball atmosphere by strictly following the traditions of the event , but also by adding local features to it.

Each year, the Spirit of Vienna orchestra comes all the way from the capital of Austria for this event, where it is joined by special guests from among the Romanian artists who perform on the greatest stages of the world. This year on the stage of the Viennese Ball will be the soprano Irina Marinas and the flutist Matei Ioachimescu, both now living in Austria, and their guest, the baritone Michael C. Havlicek.

Irina Marinaș has travelled the world to study the art of singing, from Râmnicul Vâlcea to Canada, where she graduated McGill University in Montreal under the guidance of the tenor Stefano Algieri. The soprano completed her studies in Salzburg, Austria at the Mozarteum University, where she obtained a diploma from the Master of Opera, being a student of the famous soprano Horiana Brănişteanu and the conductor Josef Wallnig. Irina made her stage debut in 2009 at the `Operafestival di Roma` performing in the role of Susanna in `The Marriage of Figaro` from Mozart, a role that she later took on again in 2011 within the 'Sommer Oper Bamberg' festival and later in 2016 and 2017 on the stages of Koblenz and Hagen theaters in Germany. At the moment, Irina is living in Austria where she is constantly developing her talent and holding concerts.

Matei Ioachimescu, a renowned Romanian flutist, has a remarkable concert activity, being recognized for his interpretations of baroque and modern repertory, but also for his cross-over recitals. He graduated from the University of Music and Performing Arts in Vienna, the city where he is currently living and where he studied flute with professor Barbara Gisler and early music with professor and harpsichordist Ingomar Rainer. Matei Ioachimescu is the winner of many distinctions and scholarships (Thyll-Dürr or Yehudi Menuhin Foundation) and he collaborates with some of the most interesting artists from Europe, on European and Japanese stages like Konzerthaus Wien, Romanian Athenaeum, Conservatorio Santa Cecilia, Budapest Music Center or the Suntory Hall.

The album of debut with pianist Cătălina Butcaru, named `Lumiere`, is regarded by critics as a standard product for piano and flute. He is known for his national tours Paris, Playlist, The color of the sounds and more recently La Vida Loca (the project with an international success on stages of Romania, Austria, Poland and Estonia), which was followed by an album with the same name, in March 2019. For his intense activity and the high quality of his projects, in 2013 he was entrusted with the title of `Ambassador of Integration` by the Austrian Foreign Ministry.

MICHAEL C. HAVLICEK has studied at the Konservatorium University in Vienna where he graduated by playing the main character in `Don Giovanni` in 2004. In 2005 he made his debut in the opera `Papageno` at the Stadttheater St.Pölten, a role which also brought him success during a tour in Japan in 2005. The recitals ("Dichterliebe" from R. Schumann, "Schwanengesang" from F. Schubert) and the concerts lead him to South Africa, Argentina, Germany and USA. In 2011, he made his debut at `Viena Volksoper`, where he performed - as a member of the Volksoper company- several parts. In Austria, he is known for combining his acting and singing skills for the interpretation of many opera and operetta characters. He won several editions of the `Viena Music` competition. After his debut at `Musiktheater Linz` he took on new parts in 2018: Danilo (The Merry Widow), Paul (Opernball) and Hunter (Rusalka).

The artistic program of the Viennese Ball is offered by the 48 young artists (age 16-24) and 23 dancing children (age 6-12) from the BVT Academy courses, 2nd edition. Furthermore, Ditte Dinesz, TV presenter at TVR Timișoara and the winner of important television awards, will once again be the host of the ball.

The lawyer Ioana Hațegan, the initiator of this event, stated: `The Viennese Ball in Timișoarahas the same spiritual meaning every year: honoring tradition and investing in the future. The Viennese Ball is a tradition brought back to life here, in the Small Vienna, and it represents a charitable event promoting and supporting causes and initiatives regarding educational projects for children and youngsters. By being involved in the charitable projects of United Way Romania, the partner of the event, we try to provide 700 children with the opportunity of having access to education.