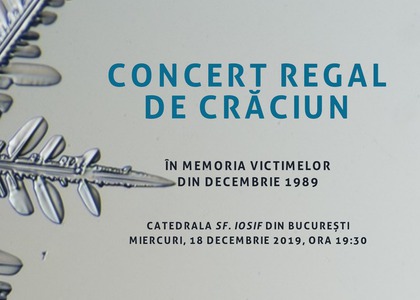 The Royal Christmas Concert performed by the Romanian Royal Choir will present to the audience, besides the traditional Romanian carols, creations of great composers from the history of international music dedicated to Christmas, such as fragments from the Christmas Oratorio, BWV 248, from Johann Sebastian Bach, the Oratorio del Noël, op. 12 from Camille Saint-Saëns, A ceremony of carols, op. 28 from Benjamin Britten and others.

This event is dedicated to the victims of the Revolution from December 1989, at 30 years from their brave sacrifice for the noble purpose of having a country closer to our ideals.

The concert will be performed by some of the most performing and talented young Romanian musicians of the moment, students and graduates of National University of Music in Bucharest, members of the Romanian Royal Choir, which is under the High Patronage of His Royal Highness Prince Radu of Romania and honored by Her Majesty Margareta, Custodian of the Crown of Romania and the Opera Clandestina, independent opera, theater and ballet company under the guidance of conductor RăzvanApetrei.

Within this event the young conductor AntonelTemistocli will make his debut conducting the Romania Royal Choir.

Attendance is free within the available places.

More details about the Romania Royal Choir on www.corul-regal.ro

With the participation of: