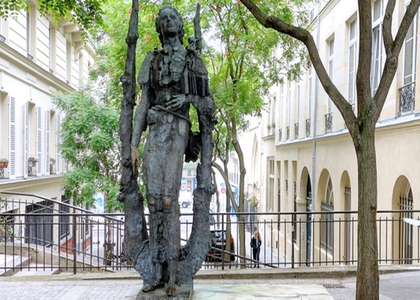 National Culture Day is celebrated through a series of events organized by the Romanian Cultural Institute in the country and abroad. The cultural projects also mark the 170th anniversary of the birth of the great national poet Mihai Eminescu.

RCI Paris: "Highlight the Romanian culture, through a smart post!", A game-contest on the social page

The friends of the Romanian Cultural Institute, but also of the Romanian culture, are invited to post a personal photograph showing the statue of Mihai Eminescu, located on the Rue des Écoles in Paris, or a video recording in which the contestant reads or recites a poem by Mihai Eminescu. The proposals will be posted on the Institute's Facebook page and will be liked by the 25,000 subscribers of the Institut Culturel Roumain de Paris page. The photos and video recordings with the most likes will receive an award (the first three in each category) with books in Romanian published by the RCI Publishing House.

RCI London: The Stories of the Romanian artists from the "Twelve Months, Twelve Creators" program and painting exhibition

The community of Romanian artists from the United Kingdom, who were part of the RCI Twelve Months program, Twelve Creators: painter Mircea Teleagă, designer Gabriela Popa, custodian and poet Simona Nastac, actress Olivia Negrean, musician Bogdan Văcărescu, architect Doina Petresion, photographer Paul Arion , violinist Maria Gîlicel, architects Anca Mihalache and Anastasia Stan, translator Gabi Reigh, pianist Anda Anastasescu and film producer Laurențiu Calciu, will be celebrated by the Romanian Cultural Institute in London. The invited audience will discover their fascinating stories, in the discussion moderated by Tessa Dunlop, award-winning TV and radio presenter. Also, will the public enjoy, on this occasion, at the headquarters of the Romanian Cultural Institute in London, the exhibition The Need for Belonging? of artist Anca Ștefănescu, on Wednesday, January 15th (panel discussion at 7 PM, private viewing of the exhibition and reception, between 8.15 PM and 9 PM).

Three events will be organized in partnership with cultural institutions on January 15th in Chisinau: the traditional musical-poetic recital and book presentations, at the bust of Mihai Eminescu, from the Alley of the Classics of Romanian Literature, at 10.00 AM, the exhibition of book graphics with the title " In the limit of the time and of the world ... ", at the National Museum of Romanian Literature Mihail Kogălniceanu, at 15.00, and the poetry and music show" My name will wear it ... ", inside the Mihai Eminescu National Theater, 6.30 PM. The collaborators of the Romanian Cultural Institute from Chisinau are the Writers' Union of Moldova, the Mihai Eminescu National Theater, the National Museum of Romanian Literature "Mihail Kogălniceanu" from Chisinau and the Purcari Winery.

RCI Istanbul: The premiere of the Violoncellissimo Ensemble concert

The performance, premiered by the Violoncellissimo Ensemble, is led by the great cellist Marin Cazacu, and the composition of the chamber band is as follows: Ștefan Cazacu, Mircea Marian, Radu Sinaci, Ella Bokor, Horațiu Ludușan, Alexandru Totan, Izabela Ghergu, Cornelius Zirbo Sekaci, Sofia Blându, Eleonora Bordânc, Victor Sandu, Iulian Ochescu and Iulia Bitta. Organized by RCI Istanbul on January 14th, at 20.00, at the Mustafa Saffet Cultural Centre in Atașehir, the concert comes to life through the involvement of two important institutions: the mayoralty of the Atașehir district and the National Tinerimea Romanian Art Center.

RCI Lisbon: Reading Marathon and dialogue with the public

Dedicated this year to contemporary Romanian poetry, the reading marathon organized annually on the National Culture Day will take place on January 15th, at 18.00, at RCI Lisbon headquarters. The reading sessions and the dialogue with the public will be moderated by translator Corneliu Popa and by Portuguese publisher and writer Manuel Fonseca. The reading marathon will start from the most important editorial appearance aimed at popularizing our literature in the Lusitanian space of recent years, namely the Anthology of Contemporary Romanian Poetry (bilingual, Romanian-Portuguese), in the translation of Corneliu Popa, published in 2019 by Guerra Guerra & Paz Editores, with the support of RCI, through the TPS (Translation and Publication Support Program). The event is organized by RCI Lisbon, in collaboration with the Romanian Embassy in the Portuguese Republic.

As part of the "Jornadas hispano-rumanas / Hispanic-Romanian Days" program, students from the Complutense University of Madrid will practice their knowledge and skills on Romanian culture and translations from Romanian literature. In the end, RCI Madrid will offer three prizes consisting of books, T-shirts, gadgets, as well as an internship at the representative library. The events are organized by RCI Madrid, in collaboration with the Romanian Embassy in the Kingdom of Spain and the Complutense University of Madrid.

Actress Daniela Nane, accompanied by Ioana Maria Lupașcu, will recite the lyrics of Mihai Eminescu (in the translation of Adrian Săhlean), George Coșbuc, Alexandru Macedonski or Ana Blandiana, in Romanian and English, in New York (January 15th), Washington (January 17th) and Philadelphia (January 19th). Thus, "The piano with poems", an event dedicated to the American audience and to the Romanian diaspora, will also include compositions presented by Ioana Maria Lupașcu, which belong to composers such as Gregory Dinicu, Franz Liszt, Astor Piazzolla, or Ciprian Porumbescu. The project is being carried out by RCI New York, with the support of the Romanian Embassy in Washington D.C. and the Honorary Consulate General of Romania in Philadelphia.

"Accademia di Romania in Rome: The poetry and music show "Eminescu: I remain what I was, a romantic"

Actor Ion Caramitru and clarinetist Aurelian Octav Popa will perform on January 15th, at 19.00, on the stage of the Flavio Theater in Rome, the poetry and music show "Eminescu: I remain what I was, a romantic. The event enjoys the patronage of the Romanian Embassy in Italy.

The multidisciplinary project "The world of Purcărete", photo op, film viewing and workshop, will be held on Wednesday, January 15th, at the Seghedin Branch of RCI Budapest. The exhibition "The world of Purcărete", produced by the National Theater Festival, the 2015 edition and the result of a partnership between artist, RCI, the National Theater of Budapest and UNITER, includes impressive images, made worldwide by director Silviu Purcărete, and toured in Seghedin following the success in Budapest. The project is completed by the first viewing in Seghedin of the artistic film Somewhere in the Palilula (subtitled in Hungarian), directed by Silviu Purcărete, produced by Libra Films, and by a moderated workshop by Hajnal Király, doctor in philosophy, film theory and aesthetics. The "The world of Purcărete" exhibition is open to the public between January 15th - February 17th, 2020, from Monday to Friday, between 09.00-15.00.

The recital held by the Romanian-born violinist Mihai-Anton Cucu, member of the Royal Chamber Orchestra of Stockholm (Musik på slotett), of the Chamber Orchestra and of the Royal Academy of Uppsala, which will perform Romanian music, but also well-known songs from the international repertoire, will be held on January 15th at 6 PM at RCI Stockholm headquarters. The program also includes readings by several Romanian writers, translated into Swedish, covering a wide range of literary genres and species: Mihai Eminescu, Nichita Stanescu, Geo Bogza, Nina Cassian, Ana Blandiana, Gabriela Melinescu, Ion Muresan, Ioan Es Pop , Carmen Bugan, Linda Maria Baros and Dmitri Miticov. The texts will be presented in Swedish in the reading of the Swedish actress of Romanian origin Adriana Savin. The event is organized by RCI Stockholm and the Embassy of Romania in the Kingdom of Sweden.

RCI Warsaw: Postcards with Romanian poems in Romanian and Polish

Romanian poems in bilingual Romanian and Polish versions, accompanied by short biographies of the authors, will be sent, in the form of postcards, by RCI Warsaw. The poems by Mihai Eminescu, Vasile Alecsandri, Nichita Stanescu, Nina Cassian and Marin Sorescu were selected, as well as a fragment from the poem Life of the World by Miron Costin, one of the oldest works in lyrics written in Romanian.

The conference "Great Romanian actors of the Israeli stage" will take place, on January 17th, at 12:00, at the headquarters of RCI Tel Aviv. The event is attended by some of the most important actors of Romanian origin who, through their activity, have left an important and lasting legacy, such as Sandra Sade, Tatiana Canelis Olier and Nicu Nitai. Lia Koenig, unanimously considered the "great lady of the Israeli theater" and holder of the prestigious Israel Prize and Emet Prize, and who is, in turn, speaking Romanian, will be the guest of honor of the event. The event contains two distinct parts: a poetry recital from the classics of Romanian literature, in the reading of the participating actors and the conference Great Romanian actors of the Israeli scene, during which they will talk about how they managed to combine the Romanian origins with the new Israeli identity.

RCI Vienna: Piano concert, in the Bösendorfer hall of the Mozarthaus

Pianist Adela Liculescu and violinist Kirill Maximov will perform a concert, on January 18th, in the Bösendorfer Hall in Mozarthaus, Vienna. The concert organized by RCI Vienna will have a special repertoire, which includes a score by Ludwig van Beethoven, 2020 marking 250 years since the composer's birth, and the well-known ballad of Ciprian Porumbescu composed in 1880, when the composer was studying at the University of Music in Vienna.

A brief evocation of the significance of Eminescu's work will be made by the writer and art critic Grigore Arbore, supplemented by the parallel reading - in Roman and Italian - of some of Eminescu's best-known poems, at the conference A symbolic triad: Eminescu, Vieru, Călinescu - lyrics and stories for eternity to be held at the IRCCU headquarters. The most successful transpositions in Italian of the Eminescian texts to date will be cited. The Italian poet and critic Enzo Santese will refer to the intellectual figure of Grigore Vieru (1935-2009).

Within the same event, the versatile work of academician and professor George Călinescu (1899-1965), critic, literary historian, poet and first-time prose writer will be presented briefly. Professor emeritus Bruno Mazzoni, former dean of the Foreign Language Faculty Pisa will held a conference on the topic of the critical work of George Călinescu and its importance for defining the characteristics of the works of the personalities whose writings marked the significant moments of the evolution of Romanian literature and its positioning in the European context. Dr. Alessio Colarizi Graziani, friend of Romania, translator of several languages, formerly high official of the Italian Senate, who translated, together with Laura Vincze, the quoted work of the Romanian writer scholar - L'Enigma d'Otilia, Lithos Editore, Rome, will continue with a conference on the topic of the characteristics of the literary language and the narrative modalities used by George Călinescu in his novels and especially in the novel "Otilia's Riddle".

Actress Lamia Beligan, soprano Silvia Sorina Munteanu and pianist Viorela Ciucur start on a poetic-musical journey, from January 14th to 16th, in three cities in Romania, to highlight one of the fundamental characteristics of our country - multiculturalism. Under the title " MultiCultural Romania", the event is organized by the Pro Valores Association, in partnership with the Romanian Cultural Institute, and the cities in which the three great artists will enjoy the public are Turda, Râmnicu Sărat and Brăila. Poems written by Mihai Eminescu will be presented, as well as by poets from different ethnicities: Hungarian, German, Jewish, Armenian, Greek, Polish, who lived in the present territory of Romania: Sándor Petőfi, Endre Ady, Nikolaus Lenau, Maria Banuș, Nina Cassian, Haig Acterian, Alexandru Philippide and Alexandru Macedonski. Also, Romanian arias or lieds will be interpreted.