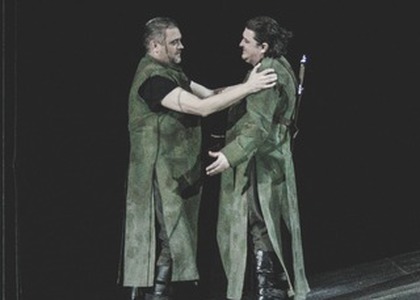 Alberto Veronesi, invited at the conductor's desk in the show "Otello" on the scene of the Bucharest National Opera

The Bucharest National Opera presents on Saturday, February 22, 2020, starting at 18:30 the show "Otello" by Giuseppe Verdi. The artistic direction, the setting and the lights bear the signature of the master Giancarlo del Monaco, the costumes are made by Stella del Monaco. The conductor will be the master Alberto Veronesi, as a guest of the first lyrical scene of the country. The choir of the Bucharest National Opera was tutored by Daniel Jinga.

The Verdian creation represented par excellence a perfect interweaving of the dramatic art with the music. Over the centuries, "Otello" has proved to be a masterpiece that has been highlighted not only by philosophical symbols, but also by the disturbing and powerful experiences of the characters, from a theatrical point of view.

A plot of family and friends was the basis of Verdi's new work; those who took part in it were Giuseppina Strepponi, the publisher Giulio Ricordi and the poet, composer and librettist Arrigo Boito. Boito's professionalism and determination managed to convince Verdi that Shakespeare's tragedy was the perfect subject, one that the composer had been searching for for years.

Verdi demonstrates with "Otello" that only a good libretto can make good music. He even says: If I wasn't afraid that they would become utopian, I would be tempted to say that in order to achieve the possible perfection of a musical work, the same man should be the author and the lyrics and the music. The unanimous conclusion was that Shakespeare never had a more worthy commentator than Verdi.

Director Giancarlo del Monaco, about the mise-en-scène of the Bucharest National Opera scene: "I do a minimalist scenographic research, in the sense that the spaces are no longer defined by a primitive realism that represents Cyprus, which can represent Venice and all that it is; who wants to sublimate and rise in the heart of the characters, which is much more important than telling a story.It is necessary to tell human situations, very difficult, complicated situations, such as jealousy, racism, evil, good ... for example, evil and good are confronted in this work between Desdemona and Iago, do you agree? Otello is a victim, a victim of evil; even Desdemona is a victim of evil, but the confrontation between good and evil is represented by Iago-Desdemona. confrontation, I want to focus the public attention on the scenic action and the drama, moreover, on the psycho-drama of this story. "