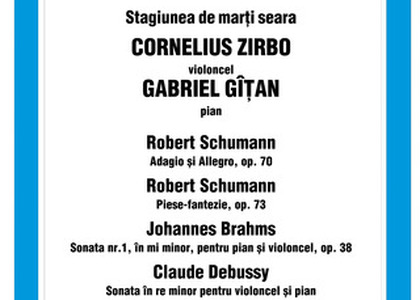 Tuesday, November 10th 2020, at 7PM, on the youtube channel of the Philharmonic, on the facebook of the Philarmonic "George Enescu" and of the Romania Musical Radio will be streamed the third concert without public from the Tuesday evening Season 2020-2021.

Claude Debussy - Sonata in re minor for cello and piano

Cornelius Zirbo was born in Cluj-Napoca, where at the age of 9 he started to study the cello at the Middle School for music "Augustin Bena". He continued his studies at the College for Arts "Dinu Lipatti", Bucharest, where he studied at the teacher Octavian Lup's class and at the moment he follows the bachelor studies of the National University for Music Bucharest in the master Marin Cazacu's class. He improved in Paris where he studied in the Class of Excellence for Cello of Gautier Capuçon, conducted at the Louis Vuitton Foundation. He is the ambassador of the Summer Academy of the famous festival Verbier (Switzerland), place where, in 2017, he continued the studies of the cello and of the chamber music with Frans Helmerson, Miklós Perényi, Pamela Frank, Klaus Hellwig, Gábor Takács-Nagy and James Ehnes.

In his ascension he was supported financially by the Princess Margareta Foundation (through the "young Talents" project), The Musician Performers Union in Romania, Provident in partnership with the School For Values and the Foundation for the Community.