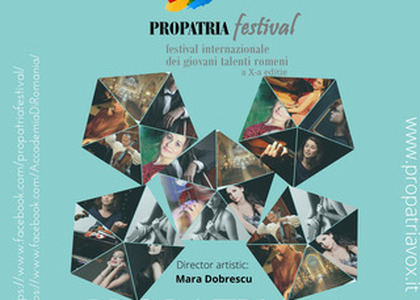 Starting on November 20th, and marking its 10th edition, the Propatria International Festival - Young Romanian Talents will open its doors for audiences all over the world, in its first-ever online version, sponsored by the General Secretariat of the Government and the Department for the Relation with Romanians Abroad. The 10th-anniversary edition aims to take a look at the festival's development from its beginnings up to the present day and bring back into the collective memory of Romanians abroad and in the country the talent and involvement of the Romanian artists from the diaspora in keeping alive the Romanian culture outside the country. These artists play the role of the cultural ambassadors of Romania and promote its image across the world.

The events will be broadcast live on https://www.facebook.com/propatriafestival/.

The Propatria International Festival - Young Romanian Talents was initiated in 2011, to identify, valorise and favour excellence among the Romanians living in Italy, and those living outside their homeland. During the first nine editions of the festival, the stress was put on the idea of fostering the Romanian culture in Italy, emphasizing its contribution to the consolidation of the relationships between the Romanian and Italian communities. The organizers considered preservation of the national identity and its formation in the consciousness of the young people to be essential because they are the future personalities of culture, sport, and sciences. Throughout its 10-year history, the festival had a multidisciplinary approach, intending to highlight the excellence of the young Romanians living abroad. In a decade, the Propatria International Festival - Young Romanian Talents has managed to become a unique project designed to promote the image of Romania and the Romanian elite outside the borders of the country. Due to the variety of important names who have stepped and collaborated on the stage over time, the festival was listed among the high-ranking artistic events organized in Italy.

Aiming to open the borders of the cultural diversity through art, and build intercultural communication bridges, the Propatria International Festival - Young Romanian Talents has hosted more than 55 events, classical music concerts, exhibitions, film and theatre presentations during the ten years of its existence. It has also awarded more than 300 young people from all over the world, as well as significant figures of culture and sport, at the Excellence Awards Gala. http://www.propatriavox.it.

From 2013-2016, the Artistic Director of the festival was pianist CătălinaDiaconu (Italy), and from 2017-2020 - pianist Mara Dobrescu (France). The programme took the audience on a fantastic journey from music to cinema, from theatre to socially-aimed events, culminating with Propatria Excellence Awards Gala. Due to their quality and variety, the musical events have been eagerly awaited during all the editions of the Propatria festival. The project itself has become an instrument of valorisation of the Romanian excellence from abroad, consolidation of the Romanian diaspora, enabling the young Romanians from all over the world to establish a permanent connection between themselves.

Beginning with 2013, when the festival was internationally acclaimed, established artists and young talents from France, Austria, USA, Belgium, Spain, Netherlands, Germany, Italy, Republic of Moldova, UK, and Romania stepped on its stage, most of them awarded with PROPATRIA trophies, Excellence Awards, or scholarships.

4. The release and broadcast of the "Propatria de 10"reportage- Propatria International Festival from the beginnings until today - a film by Virgil Oprina.

5. "PROPATRIA 10" Gala Performance and the extraordinary recital of soprano TeodoraGheorghiu(Switzerland), and Atena Carte (Switzerland) on piano.

The online transmission on