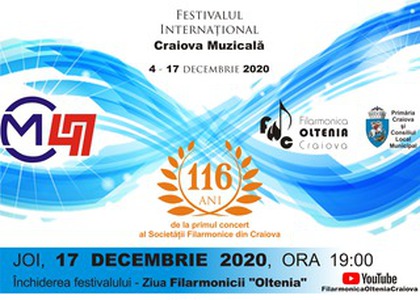 The 47th International "Craiova Muzicală" Festival ends with an online concert on Thursday, December 17th, 2020, at 7 P.M. The pieceCARMINA BURANA by Carl Orff will be performed (version for two pianos, choir and percussion) under the baton of maestro MARIUS HRISTESCU. The soloists of the evening will be pianists MIHAI UNGUREANU and CORINA STĂNESCU, soprano ANA-MARIA DONOSE, tenor VALENTIN RACOVEANU and baritone ALEXANDRU CONSTANTIN.There will be also a collaboration performed by The Academic Choir of the "Oltenia" Craiova Philharmonic. It is trained by the choirmaster PAVEL ȘOPOV and the Percussion Ensemble composed of Marian UȚĂ, Sorin SĂCEANU, Emanoil CHELARU, Florin DAVIȚOIU, Daniel CEMÂRTAN. The event also marks the Philharmonic Day, the 116th anniversary of its establishment and it will be broadcast online, on Thursday, December 17, from 7 P.M., on the institution's YouTube channel: https: //www.youtube.com/c / FilarmonicaOlteniaCraiova.

"Carmina Burana" by Carl Orff - a strange and spectacular work

Carmina Burana by Carl Orff is a large-scale stage song and it is based on medieval songs and texts from the 12th - 13th centuries. They were discovered by Christoph von Artein in one manuscript (Codex Buranus) in a Benedictine monastery in the Bavarian Alps, in 1803, and they were published in a collection in 1847. The name Carmina Burana, which is famous today,was createdby the first modern editor of the text, the German philologist Johann Andreas Schmeller. Hetranslatedthe German name of the Benedictine monastery, Benediktbeuern, into Latin. The authors of the texts (monks, philosophers, poets, ordinary people) speak in their lyrics, in a naive way, about nature, dance, life and love: songs of glory dedicated to spring and life, satirical lyrics, party songs, dances on an engaging rhythm.

The piece is subtitled "Cantiones profanae cantoribus et choris cantandae comitantibus instrumentis atque imaginibus magicis" (Profane songs for soloists and choir with instrumental accompaniment and magical paintings). It also values the authentic language of medieval manuscripts - Old Latin, German and French and it is written for an imposing ensemble: three soloists (soprano, tenor, baritone), mixed choir, children's choir, a large wind band, string orchestra and numerous percussion instruments. To make the piece more popular, C. Orff also made a version with two pianos and a large percussion section, but thhis is a less-known variant. The piece opens with the prologue entitled Fortuna, Imperatrix Mundi (Fate, Empress of the World), a hymn dedicated to the goddess of chance where we can find some famous philosophical motifs "Fortuna labilis" ("The changeling luck") and "Vanitas vanitatum et omnia vanitas" ("Vanity of vanities, all is vanity" - Ecclesiastes, 12.8).

The first public concert with orchestra and choir took place on December 17, 1904, under the direction of conductors C. Gaudy and Elie Mihailescu. The soloists were Valeria Graepel and I. G. Mayer. This event attests to the establishment of the current Philharmonic. At the beginning, the Philharmonic claimed itself with what the organizers called dinner parties (bimonthly and with chamber character). They were organized inside the Minerva Salon and at the Commercial Baths. The "Oltenia" Craiova Philharmonic was founded at the initiative of a group of musicians, out of their desire to bring their artistic message to art and culture lovers from the Băniei Fortress. At the beginning there were some enthusiastic musicians, who laid the foundations of the first symphony orchestra of Craiova, on December 17, 1904. Among the personalities who supported the "Oltenia" Craiova Philharmonic in the first decade of activity was the genius of Romanian music, George Enescu. This year marks 116 years of tradition, 116 years since the first symphonic concert held in Craiova.