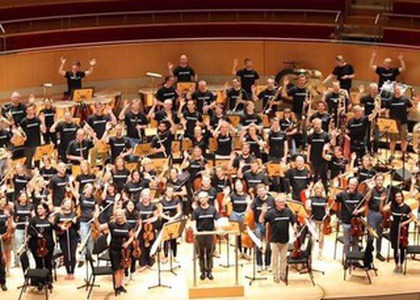 The Second Symphony in C Minor "Resurrection" by Gustav Mahler is a monumental composition that audiences did not get to hear live too often lately, because of the COVID-19 pandemic, as the score's interpretation entails the presence of a large number of musicians on stage. The performance of this symphony is one of the most powerful musical experiences one can enjoy in a concert hall; filled with dramatism and hope, it's very suited to the current times, and we hope to feel the emotions live at Radio România Muzical.

On Thursday, the 17th of March, from 20.30, we will broadcast Mahler's composition live from DR Koncerthuset, where it will be performed by the Danish National Concert Choir and the Danish National Symphony Orchestra, led by conductor Fabio Luisi. Valentina Fărcaș and mezzo-soprano Wiebke Lehmkuhl will be the soloists.

Thus, during the fifth movement of the symphony we will have the pleasure of listening to the Romanian soprano Valentina Fărcaș, one of the most internationally appreciated Romanian musicians, with an extensive artistic activity; she worked together with world renowned conductors like Riccardo Muti, Kurt Masur, Kent Nagano and Riccardo Chailly. Among the stages which hosted Valentina Fărcaș' concerts and performances are the Zurich Opera House, the Theater an der Wien, the Hong Kong Philharmonic, the Opéra National de Lyon, the Semperoper Dresden and Dutch National Opera.

Valentina Fărcaș will also sing on Friday, the 18th of March, in Copenhagen, during the Dutch National Orchestra's season, as soloist for the same "Resurrection" Symphony by Mahler. Her upcoming schedule also includes performing Mahler's Symphony No. 4 and Brahms's Requiem, together with the Hong Kong Philharmonic. This summer, she has concerts lined up at the Sankt Pölten Musikfestival, and at the Rheingau Festival, so that she may return to Copenhagen at the beginning of the next year for a new collaboration with conductor Fabio Luisi.

Valentina Fărcaș studied at the National University of Music Bucharest, furthering her studies with a course in singing at the Folkwang Hochschule Essen, from which she graduated with honors. She is also the prize winner of several international competitions held in Austria, Germany, and Romania. After finishing her studies, she has worked together with the Meiningen Theater and the Komische Oper Berlin. Valentina Fărcaș' repertoire as a soprano is impressive, as it includes Baroque, as well as Classical and Romantic compositions by Gluck, Handel, Mozart, Donizetti, Verdi, Bellini, Rossini and Jules Massenet. The soprano, who was born in Bucharest, is not only a remarkable opera singer, loved by the audiences of the world's lyric theaters, but she also excels in concert hall settings, by interpreting piano-vocal scores, oratorios and other sacred works.

On Thursday, the 17th of March, from 20.30 don't miss this encounter with soprano Valentina Fărcaș and with Mahler's Second Symphony, completed by a short interview with the conductor, Fabio Luisi.