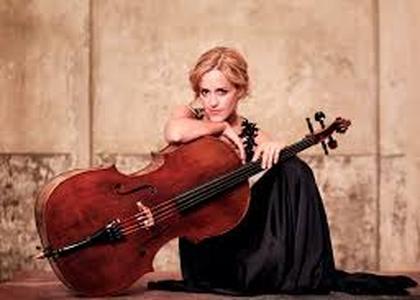 The album has been released on the 16th of November 2016 and it is included in the campaign "Vote the classical music album of 2017”. There are concerts for cello by Edward Elgar and Bohuslav Martinu, performed with the Harmonium’s Orchestra in Berlin, conducted by Sir Simon Rattle and Krzysztof Urbanski.

We start 2017 at CD Review with a live album by the Argentinian cellist Sol Gabetta. Beside her, the Harmonium’s Orchestra in Berlin conducted by two great conductors: Sir Simon Rattle and Krzysztof Urbanski.

In April 2014, Sol Gabetta has performed beside the Orchestra in Berlin conducted by Sir Simon Rattle. On the poster, Concert op. 85 in E minor for cello and orchestra by Edward Elgar, the last important work by the English composer in 1919. A song which acumulated the time’s unrest, the war’s unease, the composer’s personal sadness and despair. In august 1919, Elgar finishes the work and adds at the end: Finish. R.I.P.

Not until the ’60s did this work gain in popularity which it deserved, thanks to the great Jacqueline du Pré. Her recordings, nowadays a classic, were made with Sir John Barbirolli and the Symphonic orchestra in London, and the album has been truly a bestseller at its time. Sol Gabetta has a special relationship with Edward Elgar’s concert. She says: As a young musician, I’ve been impressed by the staggering performance of Jacqueline du Pré. I was quite intimidated by her, but in the end I couldn’t resist in trying to bring my own touch to this music. I ended up deeply knowing this work. It has a continuous dinamic change from which I started building my own vision. Elgar’s concert is the best concert ever composed for cello.

It’s hard not to notice in this recording her warm and emotional interpretation, in her rounded tones, almost amorous. Sol Gabetta is truly in love with this work. And you can tell it, she transmites the love with the passion of her instrument’s voice. And the Harmonium’s Orchestra in Berlin, conducted by Sir Simon Rattle, is the protector of this passion which supports with a discreet and fully involved arrangement.

The bottom line is that you will listen recordings of the Concert for cello by Elgar who can sit beside the legendary performance of Jacqueline du Pré.

A concert with three first auditions

The concert’s second recording of this album is dedicated to the Concert no.1 H. 196 for cello and orchestra by Bohuslav Martinu, a work with a complicated genesis, rewritten by three composers, all versions being performed in premiere by Pierre Fournier.

Sol Gabetta and the Harmonium’s Orchestra in Berlin, conducted by Krzysztof Urbanski, have interpreted in May 2014 the final version of the concert, finalised by Bohuslav Martinu in 1955. It stands out the spediness with which Gabetta, Urbanski and the orchestra respond to this music’s permanent unrest. Sol Gabetta has the emotional intensity suited to the melancholy in the slow movement, she hass the sonorant deepness with which she explores the depths which Martinu wanted to reach. This real fantasy is beautifully created by Gabetta with help from the conductor Krzysztof Urbanski. As for the finale, Sol Gabetta launches bravely into the storm within the song, interrupted from time to time by his intrspective episodes. During all this process, the communication with the orchestra is remarcable. You can here feel once more the artistry of the Polish conductor who manages to beautifully syncronize, from all the points of view, the orchestra’s sonority with the cello’s flow.

I must mention the exception sonority of the cello which has been built by Giovanni Battista Guadagnini in 1759, the instrument from Sol Gabetta’s hands.

Therefore, it’s an exceptional audition at CD Review (12:15) on the 9th and 10th of January at Radio România Muzical.