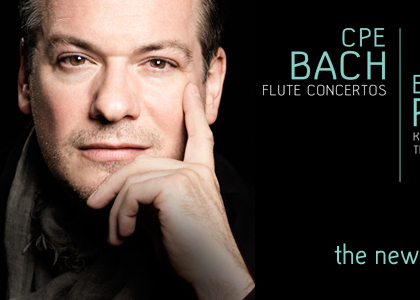 Flutist Emmanuel Pahud's most recent album, premiering on the 13th and 14th of February at CD Review

A name that Franco-Swiss flutist Emmanuel Pahud received after the release of his album, The King Flute, by Warner Classics, in 2011, which won the Diapazon D'Or. The record is dedicated to the composers who served Frederick the Great, King of Prussia, who went down in history as a great admirer of music and lover of the flute.

I should remind you about the King of the modern flute, Emmanuel Pahud, that he started studying music at the age of six, in Rome, under Francois Binet, then under Michel Moinil and Carlos Bruneel in Brussels, and Peter-Lukas Graf in Basel. He studied at the Conservatory in Paris under Michel Debost, AlainMarion, Pierre Artaud, and Christian Larde. Before graduating he won the International Contest of Duino, Italy, in 1988 and of Kobe, in Japan, in 1989, and became lead flutist of the Basel Radio Symphony Orchestra and of the Munich Philharmonic Orchestra. After finishing his studies, in 1990, he studied under the well-known flutist Aurèle Nicolet. In 1992, Claudio Abbado, the music director of the Berlin Philharmoniker, offers Emmanuel Pahud the position of lead flutist of the Berlin Philharmoniker, the same position with which James Galway started his prodigious international career. In 1996, Emmanuel Pahud signs with the EMI Classics record label, and this collaboration leads to the growth of the patrimony of flute repertoire recordings. His first EMI record, released in 1996, contained Flute Concertos and Mozart's Flute and Harp Concerto. With this album the artist won the Diapazon D'Or, and the Radio France survey declared it the Album of the Year. Now the artist is collaborating with Warner Classics.

In 2009, Emmnauel Pahud was awarded the title of Chevalier dans l'Ordre des Arts et des Lettres by the French Ministry of Culture.

The album of the most visionary son of Bach's concertos.

Emmanuel Pahud says: All three concertos on this album describe the musical universe created at the Court of Frederick the Great, King of Prussia, his need for order, as proved by the strict architecture of the score, but also Carl Philipp Emanuel Bach's free, revolutionary spirit which bursts out in the musical discourse of his entire work.

The flutist builds up the mood and controls the ambiance, he models the sound of his modern instrument so that it is in wonderful harmony with the Potsdam Kammerakademie, a group led by Trevor Pinnock, in that it anticipates and supports Emmanuel Pahud's expressive intentions. It's an exemplary collaboration for an at least interesting album. That is why the album, released on the 4th of November in 2016, was included in the Radio Romania Music campaign The records of 2017.

These are just some of the reasons why I invite you to listen to this album, premiering on the 13th and 14th of February at CD Review (11,30).