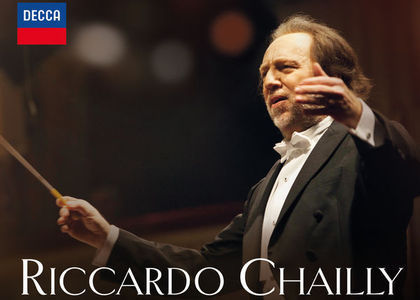 Conductor Riccardo Chailly and the Filarmonica della Scalla of Milan: CD Review, the 9th and the 10th of March

Ricardo Chailly, from the promising youngster to the Great Maestro

And in the land of lyrical theater, Riccardo Chailly's name is among the most respected, applauded by the public and praised by the critics. He often collaborates with the New York Metropolitan Theater, the Lyric Opera of Chicago, the San Francisco Opera, Covent Garden Theater in London, Staatsoper in Vienna or the Opera in Zurich. Also, Riccardo Chailly is present at the most important international music events, such as the Slzburg Festival, the Lucerne Festival or the BBC Proms in London.

Since 2015, Riccardo Chailly is the Musical Director for the La Scala Theater of Milan and he is the main conductor for the Filarmonica della Scala, orchestra with which he performs a large number of concerts, international tours and discographic projects, one of the most recent album being the one that you'll be listening to at CD Review for the first time.

This is the album title that Riccardo Chailly, together with Fillarmonica della Scala of Milan, launched on the 3rd of February 2017, a collection of orchestral moments from great masterpieces of the lyrical theater, also being included in the "Disc of 2017" campaign. It is an album with a spectacular sound that practically celebrates three centuries of music, whose glory was born under the dome of the legendary La Scala of Milan. It is a collection that comprises overtures, preludes and intermezzi from the works of Verdi, Rossini, Dozinetti, Puccini and many other names whose identity I will be unveiling during the next two episodes of CD Review. Record Review from London writes that the album "is an interesting perspective of Italian orchestral music from the Romantic period. And the Filarmonica della Scala of Milan is effervescent. The interpretation is vibrant and exuberant when it lively rises up the curtain on Verdi's and Rossini's overtures, yet reluctant and delicate on Catalani's music. It is highy passionte and effusive in Puccini's and Leoncavallo's intermezzos."

Here are just a few words that might have stirred your curiosiy to listen to this album, a novelty for the rich discography of Riccardo Chailly.

Just a few arguments that invite you to tune in to CD Review on the 9th and the 10th of March, starting at 11:30 am.