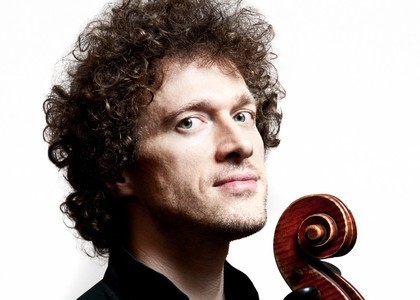 Cellist François Salque and pianist Eric Le Sage can be considered two chamber music specialists. François Salque is one of the talented cellists of his generation, winner of several awards, such as 1st Prize in the Lausanne Contest, 2nd Prize in a contest in Geneva. He also drew attention to himself in Russia, at the Tchaikovsky Contest in Moscow. In France, François Salque won the 1st Prize in the contest organized in honour of Paul Tortelier and Maurice Gendron, but he also won the Pierre Fournier Prize. Until now, François Salque has performed solo tours and chamer music recitals in over 50 countries, collaborating with artists like Jean-Claude Pennetier, Alexandre Tharaud, Michel Portal, Paul Meyer, Emmanuel Pahud, Itamar Golan, Renaud Capuçon, Barry Douglas or Gil Sahaham. It is worth mentioning that François Salque was a member of the Ysaye Quartet for five years, time in which he held more than 400 concerts with his band, and contributed to recording 7 albums. François Salque is not at his first collaboration with pianist Eric Le Sage, I will mention only the complete chamber music works for piano, composed by Gabriel Faure, the cellist being one of the artists that appears in several recordings.

Regardin Eric Le Sage, the French say that he is one of the most important pianists of hi generation, a famous representative of the French school. He is highly valued for his subtle sonority, his sense of structure and his poetic phrasing. In 2010, Eric Le Sage successfully launched the complete works for piano by Robert Schumann. It is the project that brought on a series of recitals and concerts in the most important musical centers of the world, also being the most important places in the world, in this context. Another important project launched by Eric Le Sage is the new series of 5 CDs dedicated to the complete chamber works for piano, composed by Grabriel Faureé, project that brought him several important awards.

The Beethoven album, signed by François Salque and Eric Le Sage, was launched, as previously mentioned, on the 24th of February this year, and we suggested it for the Radio România Muzical campaign, "The Discs of 2017".

The album comprises the complete work of sonatas for cello and piano by Ludwig Van Beethoven, the one that, in the beginning of the 19th Century, was one of the first composers to ever try and succeed in discovering the expressive and technical qualities of the cello, in both his symphonic works and especially through his chamber music. In the five sonatas for cello, written in more than two decades, Beethoven emphasized the cello's potential. Starting from here, future romantic composers have also placed him among the star instruments.

François Salque and Eric Le Sage found the perfect sound for interpreting the sonatas for cello and piano by Ludwig Van Beethoven. The technical ability, the phrasing and the sense of structure creates an absolutely remarkable architecture of sounds. It is a high quality audition from all points of view. The sound quality of the recordings made in the Great Hall of the Liege Conservatory in Belgium is highly remarkable.