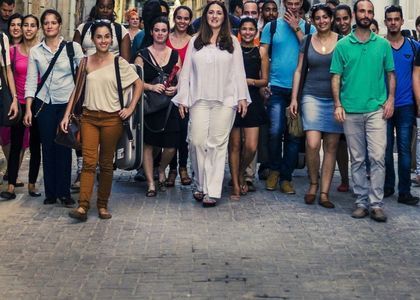 The album is signed by the American pianist Simone Dinnerstein, alongside the Havana Lyceum Orchestra, conducted by Jose Antonio Mendez Padron. It was released on the 21st of April 2017, and it is included in the "Discs of 2017" campaign.

The Independent appreciates the majestic originality of her vision and adds: Simone Dinnerstein compels the listener to follow her in a journey of discovery filled with unscheduled detours.

For Simone Dinnerstein, the Mozart in Havana album is her way of turning back to the start of her career as a musician. Her relationship with Cuba has started when she was barely 9 years old, through one of her first teachers, Solomon Mikowsky, a Cuban emigrant. Dinnerstein remembers: I learnt so much from Solomon, among others that a musical culture isn't necessarily something you are born with, but something you can choose. I add the fact that Simone Dinnerstein is an alumna of the Julliard School of New York, in Peter Serkin's class.

The album which you're hearing for the first time at CD Review is itself a surprise, interesting at least from the - otherwise professed - perspective which said that music has the capacity of crossing all political, cultural and linguistic barriers.

Simone Dinnerstein had her first meeting with Cuba in 2013, at the debut edition of Meeting of Young Pianists in Havana, a manifestation organized by Solomon Mikowsky. Of course I accepted without hesitation - the pianist says - and Havana proved to be everything Solomon told me it was: a profoundly different city from any others I've known.

Dinnerstein came back to the Havana in 2015, this time to interpret Mozart alongside the Havana Lyceum Orchestra. The pianist was impressed by this collaboration: The instrumentalists played with careful sensibility and with sensual beauty, despite the fact that, in some cases, the instruments they had were much inferior to those of the orchestras I have collaborated with.

This summer, Havana Lyceum Orchestra will make its debut in the USA in a series of concerts alongside Simone Dinnerstein, in New York, on the 13th of June, and at the University of Maryland, on the 28th of June.

Her 2017 album, Mozart in Havana, came naturally from the artistic friendship that grew between Simone Dinnerstein and the members of the Havana Lyceum Orchestra. The recordings were made at Oratorio San Felipe in Havana. Three long, sleepless nights using donated strings and recording equipment brought in by Grammy Award-winning producer Adam Abeshouse - says Simone Dinnerstein. His peerless expertise helped us navigate the various challenges of the city soundscape: stray dogs barking, a neighbor jackhammering on his roof and sparrows rustling in the eaves of the building.

We are going to hear an honorable version of Mozart's Piano Concertos No. 21 and 23, with an inventive and masterful Dinnerstein, who has committed all her artistic experience to this project. Furthermore, there's the orchestra's sonority, homogenous and disciplined in its phrasing intentions by the authoritarian baton of Jose Antonio Mendez Padron, an ensemble which seems to have discovered, with a Latin-American enthusiasm, the beauty of Mozart's music. Havana Lyceum Orchestra is evidently working hard to enter Amadeus's rhythmic and harmonious geometry, which is placed quite far away from the native balance of rumba, cha-cha, danzon and salsa.

These are the arguments which I use to make you listen to Mozart in Havana, for the first time at CD Review (11:30) on the 16th and 17th of May.