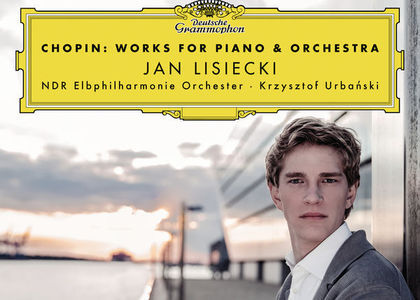 On the 10th of March, Deutsche Grammophon released the newest album signed by the Canadian pianist Jan Lisiecki, who will be 22 on the 23th of March: Concertos for piano and orchestra by Frédéric Chopin, those early opuses by Chopin which are lesser known than his famous piano concertos.

Jan Lisiecki was recorded with the Hamburg Radio Elbphilharmonie Orchestra, conducted by the 34 year old polish conductor, Krzyszt of Urbanski.

A 22-year old pianist with a prestigious international career

Jan Lisiecki is a Canadian pianist with Polish parents, and these roots are extremely important for this musician, considered a child-wonder among contemporary pianists. After all, we've already had the occasion to meet Jan Lisiecki at Radio Romania Musical, while listening to his previous three discs published by Deutsche Grammophon and to his recorded concerts from other European broadcasters. Each time, he was admired for his maturity and skill, both of which transcend his age. We must remember that Lisiecki had his international debut after participating in 2008 in the polish festival Chopin and his Europe, when he played Chopin's Concerto No. 2 - while only 13 years of age. One year later, he also played Chopin's Concerto No. 1, in Warsaw, and the two recordings from that time have been added to an album that has received many international awards, which is what led to Jan Lisiecki to his contract with the renowned Record Label Deutsche Grammophon. This was back in 2010, when Lisiecki was only 15 years old.

We must admit that the young pianists of today have a very difficult task ahead of them: there are already so many pianists who made history in the past, who left behind models of interpretation for consecrated opuses. Moreover, the technical demands of today are very high, brought about also by all the international competitions which represent launching platforms for upscale careers. Very few manage to make themselves known through other ways than that of international competitions, and Lisiecki is one of them: ever since his orchestra debut, when he was 9 years old, he's been considered a child-wonder and he's made himself known especially through his concerts and recordings. It is true, however, that Jan Lisiecki is a completely different matter, since somebody with such a brilliant talent doesn't appear very often: who would have guessed that the refinement and naturalness of today's recording belong to a 21-year old pianist?

…and a rather unusual repertoire from Chopin's works

Jan Lisiecki is a pianist who seeks to find new ways of expression, without having his interpretation overflow with eccentricities, but rather with new shades and less known repertoires. It might seem odd, but there are not many versions of the 4 Chopin opuses Lisiecki has chosen which can be found in the Deutsche Grammophon catalogue.

Maybe even more than the concerts for piano and orchestra, the works on the album we're listening to today talk about Frédéric Chopin's Polish roots: the national turned universal in the music of a genius composer. But when a pianist and a conductor with the same roots as the composer meet, the meaning of this music becomes even clearer: Jan Lisiecki and Krzysztof Urbanski succeed in evoking not only the universal aspect of Chopin's music, but also the side of it connected with the Polish musical landscape, especially with Fantasy on Polish Airs op. 13.

Jan Lisiecki is a pianist who knows that brilliant technique is not a goal in itself and who seeks ways to express his individuality within tradition; a young pianist considered one of the most promising figures in the domain of the 21st century, if indeed he isn't already more than a promise. Jan Lisiecki and the finale of his Chopin album, released on the 10th of March: Nocturne in C-sharp Minor, op. posth. Music says more than any words can…