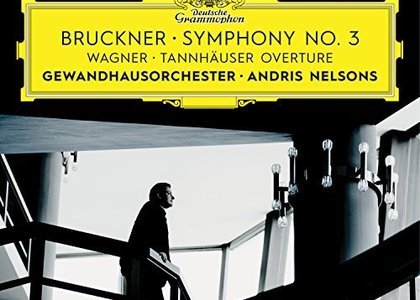 Andris Nelsons and the Leipzig Gewandhaus Orchestra - Bruckner and Wagner - Music Box, the 22nd of May

On the 5th of May, the Deutsche Grammophon record company launched the newest album signed by Latvian conductor Andris Nelsons - the debut of a new discographic project carried out by the conductor that won two Grammy awards in the past couple of years. Perhaps only a two time Grammy award winner in recent history could convince such an important record company to launch a highly difficult repertoire: a symphony by Bruckner and an overture by Wagner. In fact, the entire discographic project is dedicated to Bruckner, Andris Nelsons intenting to record the entire collection of symphonies by Bruckner, along with the Leipzig Gewandhaus Orchestra.

"Andris Nelsons is the new Karajan from Deutsche Grammophon", wrote the British critic Norman Lebrecht in May 2016, when he announced the Latvian conductor's new projects. Up until 2020, Andris Nelsons will record the complete collection of Bruckner's symphonies with the Leipzig Gewandhaus Orchestra, Dimitri Shostakovich's symphonies with the Boston Symphonic Orchestra and the complete collection of Beethoven's symphonies, with the Vienna Philharmonic Orchestra. Indeed, not even Karajan has signed such a contract in just one day!

Andris Nelsons has been the musical director of the Boston Symphonic Orchestra since 2014, with a valid contract until 2022, that can, of course, be automatically extended. Starting autumn 2017, he will also become the director for the Leipzig Gewandhaus Orchestra, with an initial five season contract.

In 2018, the Leipzig Gewandhaus Orchestra will celebrate 275 years of existence. A major project was mandatory for such an anniversary and Andris Nelsons suggested the interpretation of the complete collection of Bruckner's symphonies, combining them with the works of Wagner.

For the first album in this series, Andris Nelsons chose Bruckner's 3rd Symphony and the overture from Wagner's Tannhauser. This opera has a special connection with the Latvian conductor's biography - it is the first opera that he attended in a concert hall, at the age of 5, experience that has changed his life forever.

A Wagner-Bruckner album, an ambitious project from the Latvian conductor at just the age of 38, who is considered one of the most important conductors of our times. A conductor that has the ability to energize the public and, for the audience of the 21st century, always find fresh inspiration of some consacrated, centuries-old works, that have already been many times performed by several other famous names. A conductor capable of conveying emotions, vivacity. This is what I strongly felt while listening to Bruckner's 3rd Symphony, the first symphony he has ever created and the one Bruckner dedicated to Wagner.

Bruckner and Wagner - a link between the lives of the two composers, a link also established through the Leipzig Gewandhaus Orchestra, that is now bringing an homage to them. It is a generous project filled with meaning.

The new album signed by conductor Andris Nelsons and the Lepizig Gewandhaus Orchestra can be listened to on Monday, the 22nd of May, at 7 PM, and on rerun on Sunday, the 28th of May, starting at 1:05 PM, or anytime on the "Discs of 2017" project website.