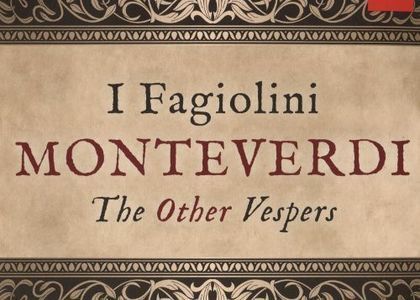 The I Fagiolini ensemble -The Other Vespers album - Music Box, 12th of June

An album launched on the 28th of April 2017 by Decca Records, right before the anniversary of Caudio Monteverdi, celebrating this year, on the 15th of May, 450 years from his birth. The protagonist is the I Fagiolini ensemble, conducted by Robert Hollingworth, a British ensemble that we have previously listened to during Music Box, admiring it for its beautiful voices, its unity and its calculated style. The album entitled The Other Vespers is the 7th one that the I Fagiolini ensemble has recorded of Claudio Monteverdi's music, and it's the second one launched by Decco Records.

The Other Vespers; referring to the vespers composed by ClaudioMonteverdi after the year 1613, when he moved to Venice to be a chapel maestro for the Church of San Marco, a spiritual and musical symbol, through the names of composers that linked their work to the famous church. But when Monteverdi started his career there, a decline had already started after the glorious period it had during the time of Giovanni Gabrieli. Venice between the 16th and the 17th century is portrayed in Giovanni Gabrieli's music, Magnificat a 14, performed admirably by the I Fagiolini ensemble, the vocal ensemble The 24 and The English Cornett & Sackbut Ensemble. All mentioned were conducted by Robert Hollingworth.

Here is an album that sheds some light upon a lesser known and recorded part of Claudio Monteverdi's repertoire, one of the povidencial composers who, around the year 1600, was the bridge between the Renaissance to the Baroque. We are talking about religious works that were written in the last part of his life, with 20 years of experience as a chapel maestro at the Church of San Marco in Venice. "We are standing before a maestro", as Robert Hollingworth expresses it, "we have a Monteverdi that brings the novelty of Baroque, expressed in the interest shown towards the melodic lines of the solo vocals, the musical accompaniament and the virtuous vocal discourse." On the other hand, the Renaissance is still present in the chosen harmonies and even in the fact that we have a vocal ensemble up front. Furthermore, We have the original Monteverdi in a highly expressive music, made to impress its public. And for our ears today, through these recordings we also have the novelty of an instrumental ensemble that uses instruments from that period, such as a cornetto muto, a wind instrument that can no longer be seen today.

This year, we celebrate 450 years from the birth of Claudio Monteverdi, and the I Fagiolini ensemble, considered one of the best choral ensembles from Great Britain, celebrates 30 years of existence with this album. This choral ensemble, founded in 1986 as a band for the Oxford University, has a reputation to be envious with: awards, concerts on prestigious stages, a privileged collaboration with the BBC, who invited them several times on the stages for the BBC Proms Festival. I Fagiolini is an ensemble specialized in Renaissance and contemporary music. In fact, the last time we have listened to them on our current discographic broadcast from Radio România Muzical was when we presented the album entitled Amuse bouch, that comprised the French works of the 20th century, album that you can listen to again this summer, during the Album for vacation broadcast.

The international critics have already highly praised the album The Other Vespers, noticing the homogenity of the ensembles, their power to recreate the sound space of 17th century Venice in its absolute glory, and their expressive accelerando. I would also add the opportunity of listening to a repertoire that we rarely have the occasion to enjoy.