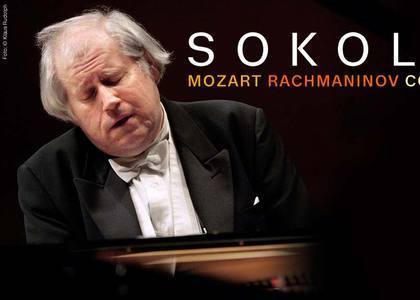 Monday, 27 March 2017 , ora 9.23
We are about to meet one of the best known, enigmatic, and appreciated pianists of our time: Grigory Sokolov. And this is a real event, since it is known that Grigory Sokolov stopped making albums more than 20 years ago: there have only been recordings of his live concerts. Moreover, Grigory Sokolov relinquished playing in concerts alongside an orchestra many years ago, so the album we are going to hear today for the first time is all the more interesting, because it offers orchestra concertos recorded by Sokolov in 1995 - Concerto No. 3 by Sergei Rachmaninoff and in 2005 - Concerto No. 23 by Wolfgang Amadeus Mozart. The album was released by Deutsche Grammophon on the 10th of March 2017.

These are some sound documents which any lover of piano music would hunt for. Once, for their rarity, for the light of legend which Grigory Sokolov emanates, and second, for their very musical worth.

In 1995, Grigory Sokolov appeared on the stage of the BBC Proms festival, which then celebrated a 100th year anniversary of its start, alongside the BBC Philharmonic Orchestra, conducted by Yan Pascal Tortelier. The chosen concerto: No. 3 by Sergei Rachmaninoff, otherwise one of the most challenging compositions for a soloist, from an artistic and technical point of view. It was a resounding success, international critics praising in unison this "extraordinary interpretation", as it was called, Grigory Sokolov being compared to a "hurricane", a force of nature. There has also been much talk of the climactic moment of the concerto, at the end, admirably built-up by the soloist and by the orchestra.

Indeed, the public exploded in boisterous applause in 1995, when they listened to Concerto No. 3 by Sergei Rachmaninoff, interpreted by the pianist Grigory Sokolov and the BBC Philharmonic Orchestra, conducted by Yan Pascal Tortelier. An admirable equilibrium between lyricism and pathos, in a version that preserves the tension of the live concerto.

Another significant moment in Grigory Sokolov's career, considered by many to be, if not the best, then among the very best pianists of today, was his presence at the Salzburg Mozart Week, in 2005. At the time, he played Concerto No. 23 for Piano and Orchestra, alongside the Mahler Chamber Orchestra, conducted by Trevor Pinnock. The critics spoke, at the time, of the intensity of Sokolov's interpretation, which may be felt even in the recording which I propose for you. And we should note that, although we are presented with a recording of a live concerto, one couldn't tell: the discourse is clear, undistorted by any note out of context, it is crystal clear, both technically and artistically.

Here is, therefore, an album which means to complete the discography of this great pianist shrouded in mystery, a mystery which can be unveiled on the DVD which accompanies this CD, a DVD on which the owner can find the documentary "A Conversation that Never Was", by Nadia Jdanova, about the life and career of Grigory Sokolov, which images from the pianist's personal archive, never before shown to the public.

Grigory Sokolov's new disc can be listened to on Monday, the 27th of March, at 19.00, and again on Sunday, the 2nd of April, or at any time on the website of the project Discs of 2017.