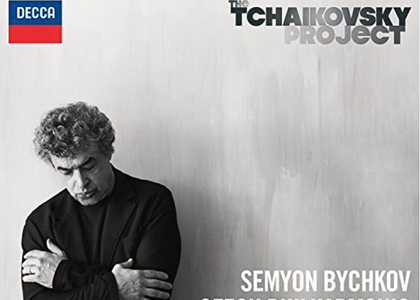 The project was launched by the Russian conductor Semyon Bychkov and, with this album, it also started making itself known in disc format. In fact, the project is extended over two continents and comprises of three orchestras. The launch of this idea took place in London, through a series of three concerts with the BBC Philharmonic Orchestra, in October 2016, at Barbican Centre. A similar series is about to take place on the other side of the ocean, with Semyon Bychkov at the head of the New York Philharmonic Orchestra, this very month. Simultaneously with the concerts, the conductor has recorded the repertoire he has planned for the Czech Philharmonic Orchestra. This is the project's first album, which was released on the 14th of October 2016.

The album also has a special signification for the Decca Record Label. It was released nearly 40 years after the publication of the first collection dedicated to Pyotr Ilyich Tchaikovsky, and it is the first album with high-definition recordings of the works from master of Russian Romantism. The Decca Record label promises the same sound performance conditions for all the symphonies, piano concertos, and other orchestra works, conducted by Semyon Bychkov.

The Pathétique and the Overture-Fantasy Romeo and Juliet

I've loved Tchaikovsky's music ever since I can remember. Like all first loves this one never died, Semyon Bychkov says.

With this impression, I invite you all to listen to the recordings on this debut album of the Tchaikovsky Project, as imagined by the conductor Semyon Bychkov, for the first time at CD Review. The project starts with The Symphony No. 6 in B minor, Op. 74, Pathétique, one of the most treasured creations of the Russian composer, about which Tchaikovsky himself said: It was the best music I've ever composed.

The Bychkov-Czech Philharmonic Orchestra variant of the Pathétique is one worthy of note. The climax points of the composition are well defined, the parts dedicated to the brass instruments bring into light all the qualities of the Prague orchestra. It's an honest interpretation, a well-proportioned, solid sound construction, with an emotional, sure essence of somebody who knows and loves Tchaikovsky's music. One has to appreciate the intuition and quality of Semyon Bychkov's interpretation.

In conclusion, you're going to hear, if I may say so, a "classic" Symphony No. 6 Pathétique by Tchaikovsky, interpretatively signed by the Czech Philharmonic Orchestra, conducted by Semyon Bychkov.

The Overture-Fantasy Romeo and Juliet is a downright dynamic display, rich in romantic essences. Semyon Bychkov, alongside the Czech Philharmonic Orchestra, outlines the story of this drama with a lot of pathos. The intensity of emotions is increased well, the characters are brought to life naturally, and the funeral march at the end of the composition seems to be even more impressive, thanks to the high-definition sound.

After these two auditions of the recordings from Semyon Bychkov's Tchaikovsky Project, I can say that, in the version of the Czech Philharmonic Orchestra, we are given an amazingly pleasant reading of the Russian composer's work, full of beauty and intense passion. It promises to be an integral collection of Tchaikovsky's works which could be compared to the most treasured ones that have been made so far.

So, let us better wait for this project to take shape step by step and, for now, to enjoy the recordings broadcast on the 12th and 13th of January at CD Review, taken from Volume I of The Tchaikovsky Project, performed by the Czech Philharmonic Orchestra, conducted by Semyon Bychkov.