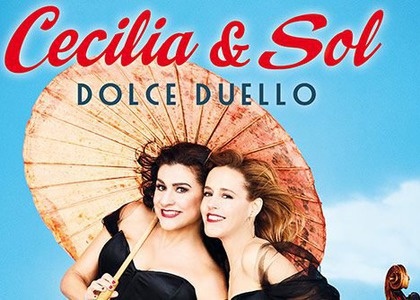 Dolce duello - an album that has already drawn the attention of the world - it was impossible to happen otherwise, as long as the names of the main characters are Cecilia Bartoli and Sol Gabetta, two of the most important musicians of the moment, who are also very close friends, in real life and spiritually speaking. Both have remarked themselves though their freshness, their rampancy and their originality.

The album Dolce duello was launched by Decca Records on the 10th of November 2017 and it comprises Baroque arias with mezzo-soprano Cecilia Bartoli, Sol Gabetta on cello obbligato and with the Capella Gabetta ensemble, conducted by Andres Gabetta, Sol's brother, who is a highly appreciated violinist, specialized in Baroque repertoire. Apart from arias, the program also prepares a concert for cello and orchestra by Luigi Boccherini.

As we already expected, Cecilia Bartoli has included on this album arias that have been recorded for the first time worldwide. We are, of course, talking about arias from operas such as Nitocri and Gianguir, by Antonio Caldara, and, also, from Nicola Porpora's Gli orti esperidi.

Cecilia Bartoli and Sol Gabetta have been planning to record such an album together for a very long time. The harmony between their personalities, the wholesome communication and friendship between the two musicians is very well highlighted on this album, Dolce duello. However, I wouldn't call it a duel, although the term gives the audience a certain thrill, especially when it is associated with famous names. In fact, there is an extraordinary cohesion and completion between Bartoli's voice and Gabetta's cello. There is a long tradition of voice and cello performing together, especially in Baroque works, where the voice is accompanied by a continuous group, the cello being among them. The voice is sustained, completed and emphasized by the warm sound of the cello, that not so seldom has a part just as difficult as the vocal part. And thus, through excellence, the cello has a virtuous speech in the Baroque period.

Dolce duello greatly emphasizes the relationship between the special voice of Cecilia Bartoli, who remains one of the biggest diva of nowadays, and the cello part, that is lively and perfectly metered at the same time. It is a delight, according to the majority of the international columnists that have reviewed this album.

The second part of this album brings us a different perspective, one with cellist Sol Gabetta in the foreground. The 36-year-old musician never ceases to amaze through the energy, freshness and the originality that she endows her performances with. I have had the occasion of listening to her live at one of the biggest festivals in Germany, and, from a spectator's point of view, the feelings and energy that this cellist conveys are truly outstanding and this represents the success that she has gained worldwide at an exceptionally high level. Strong, but also tender, powerful, but also delicate - these are all the traits that can be osberved in Sol Gabetta's interpretation of Luigi Boccherini's Concerto in D major, Op. 34, recorded on the album Dolce duello, along with Capella Gabetta, conducted by Andres Gabetta.

The album Dolce duello can be listened to at Radio România Muzical on Monday, the 4th of December, starting 7 PM, and in rerun on Sunday, the 10th of December, at 1:05 PM or anytime on the official website of the Disc of 2017 project.