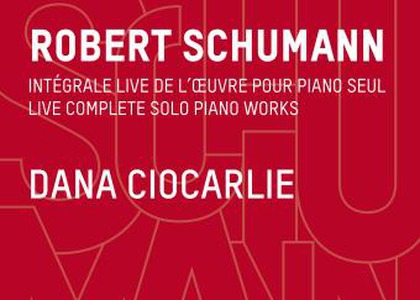 In September of this year, pianist Dana Ciocârlie released an album on "La dolce volta" label consisting in collected works for solo piano of Robert Schumann, live recordings made in Paris, in 15 recitals which were taking place during the period 2012-2016 at Byzantine Hall of the Romanian Embassy in France. The musician officially released this album through a performance at Champs Elysees Theatre together with the Colonne Orchestra conducted by Frederic Chaslin. It was a large-scale event, as a result of which critics from the most prestigious French publications have praised the pianist Dana Ciocârlie's performance and her initiative to release a record of Schumann's collected works. Of course, there have been over time pianists who recorded these works of the Romantic German (we remember Eric le Sage and Jörg Demus), but our Romanian pianist is the only one who recorded them live, which means that her project is a world premiere which couldn't go unnoticed in the classical music world.

About the way this ambitious and complex project carried out, Dana Ciocârlie says: "My idea was to record a series of live concerts during a couple of years. One of the challenges was to find a proper hall. And the Romanian Embassy in France, whose office is in Behague Palace, has embraced with enthusiasm the idea of the project. Fifteen concerts have followed and a high point to hit, in a long inner journey. Another obstacle consisted in the energy management. I didn't allow myself to get tired. There is an aspect which has something to do with the physical endurance in this project, given the extreme nature of Schumann's writing. But, at a certain point, I no longer felt the weariness. Live recording requires a certain discipline. The public stood by my side, encouraged and invigorated me." Therefore, the series of recitals performed by pianist Dana Ciocârlie meant a colossal but fully rewarding job, materialized in a remarkable album.

At Radio România Muzical we offer you some selections from the 13 CDs which compose the aforementioned album. You will be able to admire the sound clarity and the pianist's eloquence, a truly connoisseur of Robert Schumann's music particularities. Dana Ciocârlie introduces us into the resounding universe imagined by the Romantic composer, bringing out the passion, the drama, the literal implications, the humor and the spontaneous enthusiasm. As the pianist writes down on the leaflet coming with the album, "Schumann's music isn't conceived in traditional terms. The prevailing element is the spontaneity: the instant changes from a mood to another, the structural imperfections caused by the rush of inspiration… The eternal and delirious fight with destiny is splendid to Robert Schumann." Performing his music, Dana Ciocârlie proves that she is a complete pianist, alternating the touchy poetical moments from the slow excerpts with the fast sections' lightness. Schumann's works are often put in dialogue like Florestan and Eusebiu, the two characters who define his creation, showing the compositor's both human nature sides: the first one tumultuous and the second one lyrical, melancholic. Pianist Dana Ciocârlie wonderfully emphasizes these two characters in her performance, suggesting a diversified sound combination.

The works I have selected from Dana Ciocârlie's album and which you can hear in the "CD review" section are Sonata no. 1 in F-sharp minor op. 11, Carnaval op. 9, Dances of the League of David, op. 6, Album for the Young op. 68 and Humoresque op. 20 in B-flat major. I invite you to listen to these exceptional recordings between 4 and 8 December, from 11:30.