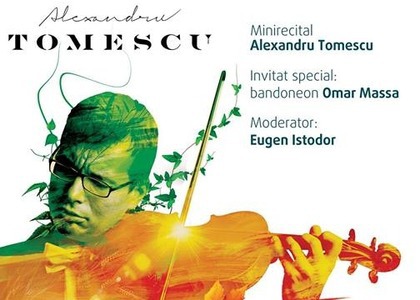 The album Stradivarius – The Seasons with Alexandru Tomescu at CD Review on October 29th and 30th!

Vivaldi's and Piazzolla's Seasons on the same disc - now there's a joining of Baroque and tango that's a recipe for success from the very start, already confirmed by several previous recorded versions, among which the one by Gidon Kremer and his ensemble Kremerata Baltica stands out. Of the two series, The Seasons, published in 1725 in Amsterdam alongside 8 other concerts, represent the Italian composer's absolute hits, already performed on a level that can sometimes cause a natural feeling of saturation. Venturing on grounds so often treaded can have its risks, but Alexandru Tomescu has no reason for such scruples. Having reached a definitive artistic maturity, the Romanian violinist was excited by the project started alongside Argentinian bandoneonist Omar Massa and the Symphactoy Orchestra conducted by Tiberiu Soare. This year, they released an album which is more than pleasing to the ear thanks to sound engineer Jakob Haendel's contribution. The works on the album - called Stradivarius - The Seasons and included in the project Discs of 2017 - were recorded in the Auditorium Hall of the National Art Museum of Romania. It is a production of the Remember Enescu Foundation and at the same time a prolonging of the 10th edition of the Stradivarius tour, which consisted of 15 concert performances alongside pianist Sânziana Mircea and bandoneonist Omar Massa and of an extremely attractive program, including Astor Piazzolla's Seasons, as well as other scores from the creations of famous Spanish composers like Granados, Albeniz, De Falla and Sarasate. With so many versions coming from the area of historically informed performances of Vivaldi's Seasons, a modern approach, using modern instruments - even though perfectly accurate from a stylistic point of view - is somewhat invigorating. The Symphactory Orchestra, a young ensemble formed in 2012, approaches the four Vivaldian concertos with energy and edge, under the baton of the passionate Tiberiu Soare, whose impetuous vision is distinctly felt. The communication with Alexandru Tomescu ist always fluent, it is obvious the musicians know each other very well and have successfully collaborated before. In Alexandru Tomescu's hands, the Stradivarius Elder-Voicu violin from 1702 - that came to be even before these opuses - gains a warm, supple, bright sonority in the upper register and smooth, velvety in the mid and lower register. It is a version where you will find tranquility and melancholy but also force and vitality, a balanced oscillation between dynamic and agogic movements. You will find the chirping of the birds, the whispering of the wind, the force of the storms, the sadness of the falling leaves, but also rays of sunshine.

Cuatro Estacions Portenas - The Four Seasons in Buenos Aireswere composed by Astor Piazzolla between 1965 and 1970 but were never created as a whole cycle. The earliest page of the scores, Verano Porteno - Summer in Buenos Aires, was released in 1965 as stage music for a theatre play. The initial score was meant for an instrumental quintet of bandoneon, violin, electric guitar, piano and double bass. The other three opuses were composed for the same instrumental ensemble only in 1970 and were very rarely performed in their entirety by Piazzolla himself. The adjective porteno-portena in the title is the name of the inhabitants from the port-city of Buenos Aires, because the Argentinian author imagined a South-American reinterpretation of both the four Vivaldian seasons and of the tango itself in the Nuevo Tango style. The concertant form in which we now often hear them belongs to Leonid Desyatnikov, who in 1999 arranged the four opuses for solo violin and orchestra, while also including very clear references to Vivaldi's Seasons. This is the version found on the album Stradivarius - The Seasons. Even though Alexandru Tomescu chose Leonid Desyatnikov's version, in a recent interview with Ștefan Costachehe said: "To this day, I have performed Piazzolla's Seasons in many forms. First, in a trio arrangement - violin, cello and piano; then several times as a soloist with the Radio Chamber Orchestra, during the Radio musical season; with chamber orchestras in an arrangement by Desyatnikov, but each time I felt there was something missing in Astor Piazzolla's music and, of course, the answer was the typical sonority of the bandoneon. The moment I started recording for the Seasons disc, I realized we need to have the bandoneonist Omar Massa with us. The music he plays, the timbre he brings immediately takes you - teleports you! - to South America." Listening to the result, you can't help but agree. The wam, tender but incisive sound of the Stradivarius Elder-Voicu violin blends harmoniously with the melancholic - sometimes painful and abrasive, sometimes moving and caressing - sound of Omar Massa's bandoneon. The note of authenticity is sure to be found on this record that vacillates with the music itself between clear, sharp attacks, between biting, impetuous, turbulent, passionate and wailing, nostalgic or even painful sonorities. A demonstration of instrumental virtuosity that balances acrobatics with emotions and expressiveness. Of course, this ensemble fully benefits from the contribution of the Symphactory Orchestra and Tiberiu Soare's ever vigilant eye for details.