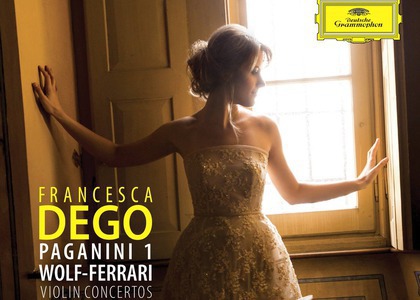 On October 27th, the Deutsche Grammophon record label released the latest album signed by Italian violinist Francesca Dego, her debut concert-album. On this album you can find violin and orchestra concertos by Niccolò Paganini and Ermanno Wolf-Ferrari. An unusual choice: the neoclassical concerto of Ermanno Wolf Ferrari is seldom heard. In fact, the recording on this CD was made during a live concert in March 2017, when this concert was performed for the first time in the UK. Francesca Dego was accompanied on the scene by the City of Birmingham Symphony Orchestra and conductor Daniele Rustioni, Francesca Dego's husband.

Ermanno Wolf Ferrari's score is a very difficult one: composed in 1943, it was dedicated to a virtuoso violinist who had a meteoric career in the 1930's, Guila Bustabo, with whom Wolf Ferrari seems to have been in love. And the music also reflects the composer's feelings and the desire to highlight the strengths of his loved one; a special quality of the music, which Francesca Dego, clearly a mature and virtuoso violinist, captures very well.

Francesca Dego is a little known name in Romania: she is 28 years old and is considered one of the most important violinists of Italy. Her teacher, the famous violinist Salvatore Accardo, says that "she is one of the greatest talents that I have ever met. She has a brilliant and infallible technique, a nice and warm sound, a musicality full of imagination, but at the same time faithful to the text that she is interpreting".

Francesca Dego caught the attention of the world in 2008 at the Niccolò Paganini contest in Genoa: she made it to the finals and received a special award - thus becoming the first Italian woman to achieve such a performance from 1961 until now. In 2012, Francesca Dego also signed an exclusive contract with Deutsche Grammophon and in June 2014 she played in the opening act of the World Cup in Brazil. She has had concerts with major orchestras in Europe, Asia and South America; among them I found a concert with the Bacau Philharmonic Orchestra. She is a young, beautiful, talented, successful woman - no wonder the Italian brand Versace has chosen her as their ambassador.

Francesca Dego is married to Daniele Rustioni, a 33-year-old conductor who has already been invited to lead performances at the New York Metropolitan Theatre. Rustioni is the lead conductor of the Lyon Opera and of the Orchestra della Toscana. A careful and efficient conductor - as you will undoubtedly notice by listening the Concerto No. 1 for violin and orchestra by Niccolò Paganini, recorded together with the violinist Francesca Dego and the City of Birmingham Symphony Orchestra.

Francesca Dego's album can be listened to for the first time in Romania on the radio station Radio Romania Muzical on Monday, November 13th, at 7 p.m., rerun on Sunday, November 19th, at 1.05 p.m. or at any other time on the website of the "Discs of 2017" project.