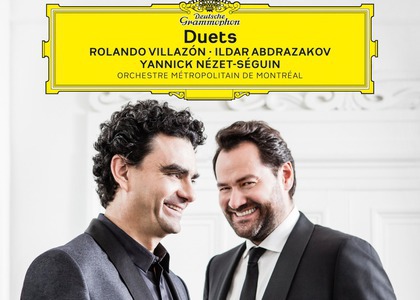 Duetsis the latest album the brings together three exceptional artists: Mexican tenor Rolando Villazón, Russian bass-baritone Ildar Abdrazakov and Canadian conductor Yannick Nézet-Séguin. Featuring the most famous duets for tenor and bass-baritone in French and Italian music, the disc released by Deutsche Grammophone this autumn on 22 September is included in the project Discs of 2017. For the recording sessions that lasted one week, the artists were invited in a church in Montreal, the hometown of the Metropolitan orchestra. The musical director of the ensemble is Yannick Nézet-Séguin. The Canadian conductor has only words of praise for the two singers: "Their voices, although very different, blend together marvelously in timbre." The disc features two operas with Mephisto as a central figure - "an Italian devil, like the one in Mefistofele and a French devil, like the one in Gounod's opera, Faust", explains Yannick Nézet-Séguin in the disc trailer. According to the promo, the disc has a long tradition behind it, with famous pairings such as Maria Callas and Giuseppe di Stefano, Luciano Pavarotti and Mirella Freni, Plácido Domingo and Leontyne Price, and the pair of the third millennium - Rolando Villazón and Anna Netrebko. While for the Mexican tenor this is not his first duet album, for Russian bass Ildar Abdrazakov it marks his debut at the "yellow label" with a duet album, but also with several pages he sings for the first time in his career, such as Mefistofele by Arrigo Boito. It is the first time that Rolando Villazón and Ildar Abdrazakov meet for a recording session, but they have met before on stage in 2009, in a production of Lucia di Lammermoor at the Metropolitan Opera in New York. For this album, they have chosen Gaetano Donizzetti's comic operas, Don Pasquale and The Elixir of Love. The CD could not be missing a page of Italian belcanto and nothing would have been better suited for this than an opera by Verdi. Simon Boccanegra was chosen. We can hear the two artists in Bizet's operas The Pearl Fishers and Carmen. Tenor Rolando Villazón and bass-baritone Ildar Abdrazakov did not forget their origins and have added two specially arranged songs to the repertoire, facets of their personal lives. In Augustin Lara's canzonetta, Granada, we see Rolando Villazón's Latin heritage, and Ildar Abdrazakov pays tribute to his native country - Russia - with the song Ochi chernye (Dark Eyes).

As two remarkable presences on the opera stage, Rolando Villazón and Ildar Abdrazakov are the new type of hero-star: modern, natural, human, not pretentious and, at the same time, cultivated, imaginative, passionate. Yannick Nézet-Séguin, one of the most exciting conductors of our time, was the third ideal member of this team. With such a great team and alongside one of the best Canadian ensembles - the Montreal Metropolitan Orchestra - the atmosphere of the seven days of recordings was truly special; there were many moments when everyone who took part in the project was overwhelmed by the beauty of the music that was being performed.

The two artists, Rolando Villazón and Ildar Abdrazakov, will set out in November and December on a promo tour that will include Prague, Berlin, Stuttgart, Munich, Paris and Vienna.

Tracks from the disc Duets can be heard this week on the segment Opera and its Stars from the show Arpeggio and is included in the project Discs of 2017. (Monday, 27 November - Thursday, 30 November, 11.00)