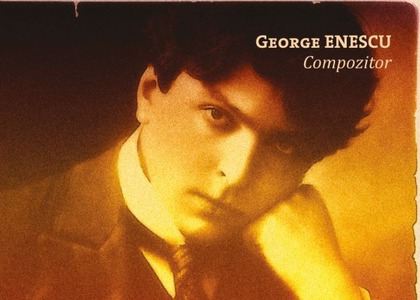 George Enescu – Composer: a new album released by Casa Radio, presented at the CD Review show between 30 October and 3 November!

In the following days, we will talk about the album dedicated by Casa Radio to the Romanian composer. The disc was recently released - in September - and includes his last three symphonies and the vocal-symphonic poem Isis, partially composed by Enescu in 1923 and arranged by Pascal Bentoiu according to the composer's notes. Recordings for the album included in the project Discs of 2017 were made between 1994 and 1998 by the National Radio Orchestra Choir under the baton of Horia Andreescu, Camil Marinescu and Corneliu Dumbrăveanu. The work opening the album is Enescu's third symphony. Russian conductor Vladimir Jurowski had this to say about it: "I did not know what sort of beast it was when I started deciphering it." Completed in 1918 and revisited in 1921, the score is truly spectacular and difficult to hear, understand and, most of all, to interpret. Furthermore, the work has always generated interpretations from outside the fields of music, literature or philosophy. Some have seen a reflection of the First World War in it, while others - like Emanoil Ciomac - have described it as a "Dantean triptic" although, with the exception of the finale, the order in the Divine Comedy is not the same as the one in the symphony. George Enescu, however, never offered any programmatic explanation for this work that comprises passion, melancholy, pain but also bitter humor, hope and, finally, illumination and mystical salvation. "And the musical wonder", says Pascal Bentoiu, "becomes a whole because all of the three imposing structures, the parts of the work, were built from the same - rather limited - thematic material." The Symphony no. 3 in C major involves a huge, Mahler-like orchestra, reflecting the complexity of the score.

A large palette of lights and shadows, of subtle, ethereal nuances, of shining, warm and mysterious harmonies - for George Enescu, this is the nature of Isis, Egyptian goddess of love, magic and death. But Isis, the goddess of his heart, was none other than Maruca Cantacuzino, his great love. "Isis" is the name by which Enescu "caressed" - a beautiful term used by Pascal Bentoiu - Maruca Rosetti Tescanu, who was then married with politician Mihai Cantacuzino. 16 years later, in 1923, George Enescu would compose the symphonic poem Isis, actually his first score after finishing Oedipus. Influences from the opera can be clearly felt in his following work, which is also included on the album George Enescu: Composer released this September by Editura Casa Radio. The full draft of the score was discovered in 1996 by Pascal Bentoiu in the archives of the Enescu Museum: six barely legible sheets of paper dated 3 July 1923. This is how Bentoiu describes the process of arranging the composition: "The task of the humble working man who was venturing in such an enterprise was in itself quite complex. Since Enescu only left a draft behind, he didn't have time to specify the orchestral formation the way he had imagined it, like he did for the two unfinished symphonies, where he elaborated significant portions from an orchestral standpoint. So, therefore, I had to put the formation together myself, without any help from the composer except for some sporadic indications about the instruments: clarinet, celesta, piccolo. The role of the choir was just as scarcely defined. Here too I had to take some initiatives, but I hope I have not betrayed the author's ideas too much. The work is a great adagio, designed with a great economy of thematic profiles, but it benefits from a large surface and a dynamic curve, so that the intervention of the human voices towards the middle of the work truly becomes an artistic necessity."

In May 1934, George Enescu completed the draft of Symphony no. 4, partially orchestrated, with a thin line of black ink. The blank spaces were filled in by composer Pascal Bentoiu, the subtle specialist in Enescu's music. The work, structured in three movements, also features on the album dedicated to Enescu by Editura Casa Radio. The CD is included in the project Discs of 2017 as well. Enescu managed to arrange only the first part and about a quarter of the second part - the rest of the material was later arranged by Pascal Bentoiu. "The main reason behind this was my conviction that the scores of the unfinished symphonies were hiding great virtual treasures. To me it seemed important above all else to let the public know about these monuments erected by Enescu's mind. On the slopes of creation after Oedipus, the right proportion between symphonic and chamber works was reestablished, not very different from the one predating the opera", says Pascal Bentoiu. The first part of the symphony is also the most complex one. It was composed in the form of a sonata, with a first theme somehow related to the one of his first ever symphony. The atmosphere, however, is entirely different: more agitated, more painful, and in some places even violent. The second movement comes close to a funeral march, according to Pascal Bentoiu, that ends with resignation and reconciliation. The last part makes a stark contrast from the other two and takes us into a world of joy, like a positive resolution of the earlier tensions.

Our journey through the latest album released by Editura Casa Radio and dedicated to George Enescu ends with the last work on the disc, the Symphony no. 5 in D Major by George Enescu, based on a version of the poem "Mai am un singur dor" (I Have Only One More Longing) by Mihai Eminescu. Drafted in 1941 at the Villa Luminiș in Sinaia and partially arranged, the score was partially completed posthumously, following the composer's notes, by Cornel Țăranu in the 70's and later given a final form by Pascal Bentoiu in 1995. The premiere of the fully arranged Symphony no. 5 took place in 1996 in the exact same form recorded on the disc, the one performed by the National Radio Orchestra and the Radio Academic Choir, with Horia Andreescu conducting and tenor Florin Diaconescu performing the solo vocal parts. "I have to confess", says Pascal Bentoiu, "that the moment you try to continue - even by just arranging - Enescu's musical gesture is quite frightening. Because you feel that, in fact, you can't. The beauty of the 25 complete pages, written by the author, surpasses - it seems to me - almost anything that Enescu himself ever put on a sheet of paper with staves. There is a unique vibration in this musical conduct, an inimitable sheen. After listening to the whole symphony, Anatol Vieru told me "You started an impossible task that had to be completed. Maybe it had to be done, indeed, in order to pay tribute - even if rather imperfectly - to the work that, had it been finished, might have been the masterpiece of his symphonic compositions." Pascal Bentoiu also adds that "there is still that je ne sais quoi that Enescu used to add at the last moment and that will always be missing from this work." The Symphony no. 5 in D Major has four parts. The first is a succession of symphonic impetuses that gradually come together only to be broken by an atmosphere that Bentoiu calls "solitude". The second, rhapsodic movement comes close to the universe of the "Săteasca" (Rural) suite and to the world of the happy and mysterious childhood, while the third one is an energetic scherzo with a note of fantasy and sometimes violent, even demonic, nuances. The finale starts off almost like a solemn funeral march, sweetened by the return of the low chords of the theme from the second part. Pascal Bentoiu considers that the slowly and peacefully dissolving finale is closer to the idea of Buddhist Nirvana than the Christian afterlife, bringing his last contribution to the symphony to a serene and bright ending.