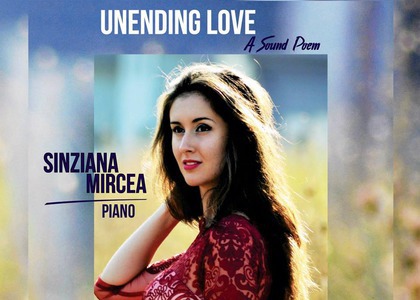 Last year, pianist Sînziana Mircea released her debut album "Nihil sine Deo" at the Radio House Publishing and finished third in the top chart of artists voted by Radio Romania Musical during the campaign "Vote the classical music disc of 2016". This September, the musician released her second album containing solo piano pieces too. The recordings took place in December 2016, at the Bossi Villa in Italy, and represented the first collaboration between the Romanian pianist and Sheva Collection Disc House.

The disc, "Unending Love", opens with Johann Sebastian Bach's music, the same as the first album of the artist, then it moves on to Pyotr Ilyich Tchaikovsky, Isaac Albeniz, Christoph Willibald Gluck and Franz Liszt, ending with Romanian music, Suite op. 10 nr. 2 by Enescu, a basic piece in the pianist's repertoire. Thus, Sânziana Mircea adapts pieces from different stylistic zones: starting from baroque music then heading towards romanticism and music of the 20th Century. Nonetheless, the things that guide and inspire the artist in this journey of the sounds are love and poetry. Inspired by the texts of writer and philosopher Rabindranath Tagore, pianist Sânziana Mircea writes on the brochure attached to her disc: "I can't write poetry, but I love reading it, as much as I love the poetry of music and the music of the whispered love poems. My album is an echoing poem dedicated to love, no matter which kind. Sounds like the lines of the famous poem "Unending love" by Rabindranath Tagore: "My spellbound heart has made and remade the necklace of songs / That you take as a gift, wear round your neck in your many forms / In life after life, in age after age, forever". Sânziana Mircea goes on: in the most wonderful way, my favorite Bengali poet brings together philosophy and religion, mixed with deep emotions which we all feel throughout our lives". In this way, pianist Sânziana Mircea explains her artistic career and lets us know that the music she brings on this disc has deep meaning and a literary background. She proves to be a passionate musician, lively and mature despite her age, with a solid culture and an enchanting personality. Lucid and intelligent, the pianist approaches this album's repertoire with stylistic accuracy showing at the same time the ability to express emotion.

Among the recordings on the disc "Unending love" we remarked how lively she played the Prelude of the Cantata BWV 20, named "We thank thee, God" by Johann Sebastian Bach in the arrangement of Wilhelm Kempff, but also the way she interpreted "Venetia and Napoli" from the suites "Years of pilgrimage" by Franz Liszt, an effervescent composition, full of lyricism and diverse sonorous colours. The suite begins with Gondoliera, a piece based on a folk Venetian song, with tunes of Italian perfume. The pianist Sânziana Mircea takes us to a picturesque, nostalgic atmosphere, without becoming sentimental. The second part, Canzone, inspired by the opera "Otello" by Rossini, is rich in dramatic character and dark sonorities. In the last piece of the suite, Tarantella, which is more courageous and complex, the pianist Sânziana Mircea shows her technical qualities and her splendid artistic perfection.

The disc ends with The Second Suite op. 10 in D major by George Enescu, a piece composed between 1901 and 1903 in Paris and dedicated to the French pianist and composer Louis Diemer. The composition combines elements from the French neoclassicism and impressionism and reminds us of the elegance of the baroque dancing suites. Pianist Sânziana Mircea describes this suite in the disc's brochure as "exuberant, a jewel which gleams like a star, with fantasy or brilliance, splendid in the starry night, in an endless universe". The composition begins with Toccata, whose chord structures sound like bells. Pianist Sânziana Mircea delicately outlines the sonorous plans, showing a solid technique. The second part, Sarabanda, in slow tempo, has complex harmonies and is composed in such a way that it takes us towards the sounds of the harp. The next one is the wonderful Pavana, a piece in which the pianist carries us along, with a delicate touch, towards an atmosphere of melancholy and inner peace. The suite in D major by Enescu ends with a lively Bouree with explosive sonorities, played by Sânziana Mircea with a precise rhythmical sense and a contagious energy.

I suggest that you listen to these extracts from the album "Unending love" Monday and Tuesday (11th and 12th of December), from 11:30, at CD Review during the "Arpeggio" show.