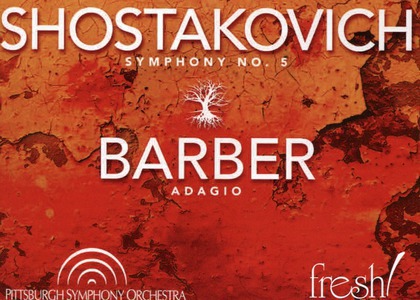 An event-album from the Reference Recordings series: the seventh album signed by the Pittsburgh Symphony Orchestra, conducted by Manfred Honeck, for this American Record Label. This album contains: Symphony No. 5 by Shostakovich and Adagio by Samuel Barber, recorded in June and October 2013, during live concerts.

We have noted, looking at the number of sales of the Humanitas Bookshops, that the albums of the Pittsburgh Symphony Orchestra have been the most sought-after orchestra albums at the 2017 Enescu Festival. And not by chance: the technical and artistic quality of this ensemble, conducted by the Swiss Manfred Honeck since the 2008-2009 theatrical season, is overwhelming.

Manfred Honeck is aware that on a discographic market saturated with interpretations of famous works you have to come up with something extraordinary in order to make yourself known, so his orchestra didn't rely on uncommon repertoires, but on the recording's uncommon technical and artistic quality. And, more so, on the conductor's exceptional understanding, as he, for example, finds in Shostakovich's Symphony No. 5 elements connecting it with Gustav Mahler, extensively described by Honeck in the CD's booklet.

Shostakovich's Symphony No. 5 is, at the moment, one of the most famous and played symphonies of the Russian composer. An opus written in 1937, one year after Shostakovich's fallout with the Stalinist regime, after Stalin himself had assisted at a representation of the opera Lady Macbeth of Mtsensk. From that moment on, Shostakovich had lived with the permanent fear of being deported to Siberia, he withdrew within himself and grew almost completely isolated from others. And he wrote this Symphony No. 5, which had an immense success - it is said that, on its premiere, the applause had lasted for half an hour. The Russians didn't see in this symphony a glorious transformation of man under Communism, like the authorities interpreted it, but the manifestation of a misfortune felt by a people, while also being impressed by the echoes of Russian religious music, which seems to become even more apparent in the third part of this symphony. People cried at the premiere of this symphony, when they listened to this slow part: and 80 years after this premiere, the Pittsburgh Symphony Orchestra's interpretation, with Manfred Honeck as the conductor, makes us relieve the drama of those who had been through the hopeless desert of the Communist regime. We have before us a masterly rendition of Shostakovich's Symphony No. 5, and I don't think Kalman Rubinson, the American critic from "Stereophile Magazine", has exaggerated when he said that this interpretation of the Pittsburgh Symphony Orchestra was "the best of the century". There was more tension and introversion in this interpretation than in the one of the Boston Symphony Orchestra, conducted by Andris Nelsons, who has won a Grammy award this year.

This album is a good reference for Shostakovich's discography, but also for that of Samuel Barber: Manfred Honeck chose that, along Shostakovich's Symphony No. 5, to also feature the most famous work of the American composer Samuel Barber, Adagio for Strings. The BBC listeners voted it as the saddest musical piece ever written; in Honeck's version, it is a reinterpretation of a moment from the Catholic missal, Agnus Dei, which has the following concept: "Lamb of God, who takes away the sins of the world, have mercy upon us, grant us peace". Samuel Barber himself created a version of this Adagio for an a cappella choir, on the text of Agnus Dei, in 1967, Manfred Honeck says in the CD's booklet. So Barber's Adagio, in the version of the Pittsburgh Symphony Orchestra, is not about despair and sadness, but about the strength of faith and spiritual enlightenment - noting here that Honeck himself is religious, as I have found out in an interview I had with him in 2010. "For me, God is the centre," he told me at the time.

The new album signed by Manfred Honeck and the Pittsburgh Symphony Orchestra can be heard on Monday, the 30th of October, at 19.00, and again on Sunday, the 5th of November, at 13.05, or you can listen to it anytime on the website of the Albums of the Year 2017 project.