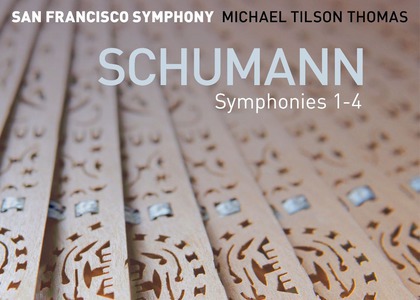 Between January 8th and 11th, for the first time at Radio Romania Music, I will introduce you to an album that contains the complete symphonies of Robert Schumann, performed by the San Francisco Symphonic Orchestra conducted by Michael Tilson Thomas. It is a set of eleven discs released last November which includes live recordings from concerts performed at the end of 2015 and the spring of 2016 that have received enthusiastic reviews from north-American critics. Dubbed by the San Francisco Chronicle as "magnificent", the recordings set Schumann's symphonies in a traditional, balanced view, with an extraordinary dynamic control that reminds us of versions conducted by the likes of Herbert von Karajan, Riccardo Muti or Wolfgang Sawallish. With regards to the way he approaches the works, conductor Michael Tilson Thomas had this to say: "Inspired by the Romantic poets and composers he loved, Schumann created symphonies that tell musical stories. They don't follow a clear pattern, rather they are interior dramas. Whether they are focused on exploration or inspire safety, exaltation or relaxation, melancholy or joy, these shining works are an environment that favors the birth of powerful emotions. In his symphonies, Schumann moves between different worlds of sound. Some sections are truly massive and resounding. Others have solo or chamber sections, suggesting songs from the rural world. So how can these different ideas be delivered by the tight and ample, typically Romantic orchestras?" Conductor Michael Tilson Thomas himself has the answer: "My approach on Schumann's work is trying to always vary the number of instrumentalists involved in the performance. Depending on the musical situation, the orchestra can transform from a massive ensemble into a chamber ensemble." We find the features Michael Tilson Thomas talks about in the Symphony no. 1 "Spring" by Schumann, a work where the conductor contrasts - by using the methods above - the dramatic character of the symphonic creation with the delicate and refined nuances of Schumann's Romanticism.

The process of fleshing out the Symphony no. 2 in C major began in December 1845. The German composer spent all of his next year working in the orchestration but, because of his depression and insecure health, only managed to finish the work on October 19th 1846. The composer's fluctuant mood is reflected in the contrasting features of the four parts. Just as Schumann said, "The music of the Symphony no. 2 expresses light and dark, sun and shade". After the first audition - held at the Gewandhaus in Leipzig, under director Felix Mendelssohn - the work enjoyed success. It was appraised by critics for its profoundness and its uplifting, sometimes optimistic, sonorities. In the first of the Symphony op. 61, Sustenuto Assai - Allegro ma non troppo, inspired by the preludes and choral works of Johann Sebastian Bach, conductor Michael Tilson Thomas gives the San Francisco Symphonic Orchestra a full, well-rounded, sumptuous sound, while also focusing on the punctuated rhythmic pulsations that bring vigor to the musical discourse. The second part is a Scherzo where the virtuosity and discipline of the orchestra come to shine; the instrumentalists accurately follow the tempo changes dictated by their conductor. In the slow part of the work, the orchestra is able to create a mysterious atmosphere as the string parts expressively outline the long phrases. And the finale, an Allegro molto vivace, is performed boldly and resolutely, with a remarkable thoroughness and technical precision on the part of musicians.

Robert Schuman wrote his third symphony in November 1850. Not long before this, the composer had travelled with his wife, Clara, in the Rhine area; the Symphony no. 3 would evoke this wonderful region of Germany, as it bears the title "Rhenish". Schumann was, at the time, in a very musically creative mood, having just finished working on his famous Concerto for cello and orchestra. Just like his first symphony, the third one was written in a heartbeat, in a moment of maximum inspiration, and was finished at the beginning of December 1850. The first audition came two month later, when the work was performed by the Dusseldorf Symphonic Orchestra. The "Rhenish" Symphony has ever since been known as one of the most German symphonic creations; Schumann actually uses German indications to name each of the five parts in the work. In the theme that opens the symphony, the listener can imagine the flow of the powerful Rhine, the succession of the notes suggests the rocking of a ship on the waves, a feeling also created by the rhythmic pulsations of the second part, the Scherzo. Additional color is given by German folk music influences - the composer actually wrote to his biographer that "the inspiration coming from folk music should prevail in order to reflect the perfume of the local music". Schumann also wrote that the fourth part sounds like "a musical accompaniment for a solemn ceremony". This move features the trombone for the first time, as if to suggest an ecclesial atmosphere with choral sound textures through their soft timbre. The bright harmonies return in the last part, alongside happy tunes and rustic dance rhythms, while the horns play melodic passages alluding to elements from the first movement of the symphony, giving unity to this ample work that reflects Robert Schumann's skill in creating massive and complex musical structures. In his attempt to offer Schumann's Symphony no. 3 ample and delicate sonorities, Michael Tilson Thomas manages to impose a warm and clean sound to his Orchestra, with no dynamic excesses, while at the same time creating an efficient contrast between the powerful nuances at the beginning and the end of the symphony and the more grave, suave nuances in the fourth part. The interpretation of the other two movements of the work is similar, creating Spring-like sonorities that suggest good humor and optimism.

The Symphony no. 4 in D minor by Robert Schumann is a work with a dense orchestration, intensely emotional and compact in structure, as it is performed with no breaks between the four parts. The first movement opens with a meditative introduction, and almost the entire musical material of symphony contain elements derived from these introductive measures. The second movement, the Romanza, with its lyrical and cantabile melodies, reveals the expressivity of the San Francisco Orchestra, especially the part of the violins, which displays ornamented melodic passages. In the following Scherzo, the ensemble conducted by Tilson Thomas focuses this time on vigorous and vibrating melodies. In the finale, the musical discourse is completely different, as it features an ample palette of nuances performed with contrasting tone qualities by the San Francisco Orchestra under the baton of Michael Tilson Thomas.

Born in 1944 in Los Angeles, Michael Tilson Thomas, one of today's most respected conductors, studied the piano with John Crown, and conducting and composition with Ingolf Dahl at the University of South Carolina. Over the years, he has directed prestigious ensembles from the USA and Europe, such as the Boston Symphonic Orchestra (where he made his debut in 1969), the Los Angeles and New York Philharmonics, the London Symphonic Orchestra. Starting from 1995, Michael Tilson Thomas has been the musical director of the San Francisco Symphonic Orchestra, which he had previously conducted as a guest in 1974, and has contributed to the ensemble's growing prestige. His recordings feature a well-received complete orchestral works of Mahler and a set dedicated to Beethoven's creation. The album brought him several Grand Prix du Disque, Echo Klassik and Grammy prizes. The American conductor has always been a strong advocate of live recordings, as he wants to offer listeners the opportunity to feel the raw and live energy of the concert stages. With excellent sound and clarity and a remarkable technical quality, his recordings are appreciated for the well-defined color of the sounds, the accurate attacks, the rhythmic precision and large phrasings, as the conductor clearly has an inclination towards grandiose musical structures.

Michael Tilson Thomas and the San Francisco Symphonic Orchestra offer us a remarkable interpretation of Robert Schumann's four symphonies which I will also recommend between January 8th and 11th 2017 on "CD Review", starting from 11.30, during the show "Arpeggio".