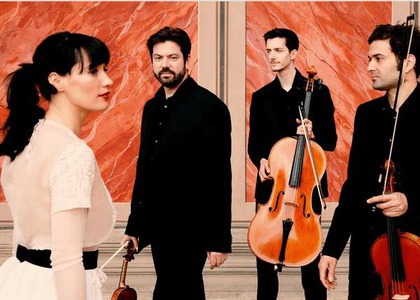 Founded in 2014, the Berlin Piano Quartet is already considered one of the most valuable chamber ensembles. Composed of musicians of different nationalities, three of them also being members of the Philharmonic of Berlin - violinist Cristoph Horak, who was born in Switzerland, German viola player Micha Afkham and French violinist Kim Barbier - the quartet proposes unitary interpretations, well-crafted from a technical point of view, with a clear and clean sound and with a well adapted style for the approached repertoire. One of the declared purposes of this ensemble is to bring forth some of the less interpreted works. An they achieved this dream when the musician's first album was launched in 2016 , including, apart from well-known Opuses by Faure and Brahms, Alfred Schnittke's Quartet in A minor, a work that is usually avoided due to the dissonant composition and the complex polyphonic writing. Instead, for the second album that was launched in November of last year, the Berlin Piano Quartet suggests three well-known works, that are frequently interpreted in concert halls and in recording studios. We are talking about the KV 478 Quartet in G minor by Wolfgang Amadeus Mozart, the Quartet in A minor by Gustav Mahler and Op. 47 Quartet in E flat major by Robert Schumann.

At Radio România Muzical, we have prepared for you a selection of excerpts from this album that was recorded in Berlin between the 13th and the 17th of March 2017. You have the occasion to admire the superb melodies, the playful rhythms and the bright harmonies distinctive to Mozart's works. In the KV 478 Quartet, composed in 1785, being the first and one of the most famous works from the chamber repertoire destined for a violin ensemble, we discover an extraordinary sense of balance and architectural structures that are close to perfection. His work starts with an Allegro rich in themes and musical ideas. Pianis Kim Barbier stands out with his brilliant technique, that subtly upholds the melody of the string instruments, gaining personality and a unique touch while performing the solo parts. The pianist also begins the second part, Andante, with a splendidly adorned melody, which is then complemented by the violin. Afterwards follows a calm dialogue between the instruments, in an intimate mood set delicately and uniformly by the German ensemble. At the end of the song, the brilliant Rondo in G major creates a veracious melodic competition between the piano and the string instruments.

The last work presented on the album is Robert Schumann's Op. 47 Piano Quartet in E flat major. Although he didn't venture in the world of chamber music, Schumann composed three string quartets, a piano quartet and a quintet throughout just one year: 1842. "I am putting a lot of work and joy into my piano Quartet", wrote Schumann in his diary, in October of that same year. The composer would keep the same joyful and vivacious mood throughout his entire work, which was highly appreciated for its charm and its profound romantic spirit, later becoming one of the chamber works that have been highly interpreted and recorded throughout time. Berlin Piano Quartet offers a viable version of this composition. I could say that Scumann's work is the crown jewel of this album, containing music that emphasizes the expressiveness and the lyricism of the Berliner ensemble. As opposed to Mozart's and Beethoven's quartets, which were familiar to Schumann, in the Op. 47 Quartet, the composer tones down the importance shown towards the piano to create the perfect mixture between the composition and the string instruments. Once the sound were balanced, Schumann imposes a clear architectural structure, that does not outshine the poetic ideas of the four parts. The first movement starts with the introduction of delicate tones, before the themes could be energetically displayed. Here, the synchronization of the Berlin Piano Quartet members is close to perfection, in both agogic elements, and dynamic ones. The second part is a lovely Scherzo, with repetitive staccato passages that link together the musical sections, being interpreted with great rhythmic and intonation precision by the four musicians. In contrast, the following slow movement, Andante, is performed with great sensitivity and with very delicate phrasing, emphasizing the warm and romantic sound of the cello. The ending, Vivace, displays an impressive and energetic counterpoint technique, accurately controlled by the Berlin Piano Quartet ensemble.

You can listen to the most recent album recorded by the Berlin Piano Quartet ensemble in premiere at Radio România Muzical on the 18th and the 19th of January, starting 11:30 AM, at CD Review, during the "Arpeggio" transmission.
Larisa Clempuș
Translated by Ruxandra Vorotneac,
MTTLC 2ND Year University of Bucharest
Return to archived Clasic