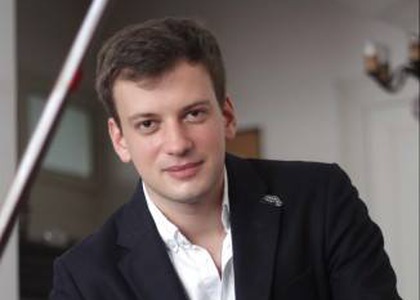 When I first heard Mihai Ritivoiu playing the piano, on the occasion of his participation at the Contest during Lipatti Days organized by Radio România Muzical in 2010, I was struck by the special artistic level of the 21st century musician. Under his fingers, the sound of the piano gained a special amplitude and depth, supported by an infallible technique. I have gradually noticed in the pianist Mihai Ritivoiu a combination of quite rare qualities: self-control, almost perfect lucidity on the stage, focus on details and, at the same time, a natural ability to express affectionately and to communicate with the audience, without showing a giant and unnecessary gesture. That being said, I was not surprised by the further pianist's evolution and career ascent. After winning in 2010 the contest dedicated to Dinu Lipatti, he became a laureate of the "George Enescu" International Competition (in 2011), and a year later he graduated from the National Music University of Bucharest in the class of the famous professor Viniciu Moroianu. There came a period for Mihai Ritivoiu of intensive studies at the Guildhall School of Music and Drama in London, with Professor Joan Hevill. The pianist is currently set up in London, where he conducts a notable concert activity: he has performed so far on prestigious scenes such as Wigmore Hall, Barbican Center or St. Martin in the Fields. This spring, he will debut on another important stage in London, Cadogan Hall, and at the Transylvania Philharmonic in Cluj-Napoca.

In parallel with his recitals and concerts, the pianist Mihai Ritivoiu started also the discography. In September he released his debut album at Genuin in Germany. During the "George Enescu" Festival, the album was released in Romania and the international launch will be held in March. Recorded in England, the disc you can listen to Radio Romania Musical includes Prelude, Choral and Fugue by Cesar Franck, Sonata no. 1 op. 24 by George Enescu and Sonata in B Minor by Franz Liszt, a difficult and demanding repertoire, difficult to sustain both technically and emotionally, but which the pianist can handle. In the brochure accompanying the disc, Mihai Ritivoiu says: "In choosing the repertoire for my debut album, I felt attracted by three works that, although different, cross the boundaries of piano music, whether we are talking about the sounds that almost imitate the organ and the bells in Prelude, Choral and Fugue, or the orchestral textures in the sonatas of Enescu and Liszt."

The work that opens the album has been included by Mihai Ritivoiu in his repertoire for many years; but his current vision seems fresh and gets a new meaning. Here is what the pianist writes about Cesar Franck's work, composed in 1884: "The burning passion of Prelude, Coral, and Fugue reflects the deep religious belief of Cesar Franck, a work whose forms - originally inspired by Johann Sebastian Bach - are transformed and pushed beyond convention, into an emotional disorder. Only at the end of the Fugue, when the theme of the Coral reappears, comes the liberation. "The pianist Mihai Ritivoiu manages to transmit these features in his interpretation. In Prelude, he outlines a wide dynamic palette on complex soundtracks. Then, playing the splendid Coral, the musician reveals his spiritual side, the piano's nuances becoming soft, almost divine. In Fugue, which returns to grandiose contra puncture structures, the pianist shows an impressive technique doubled by a special sense of phrasing.

The second work on Mihai Ritivoiu's album, Sonata no. 1 op. 24 by George Enescu, is "a hard-to-read piece from the perspective of both the interpreter and the listener," writes the pianist. In an interview at Radio România Muzical in September, during his participation in the last edition of "George Enescu" Festival, Mihai Ritivoiu spoke about the importance of the work mentioned in his repertoire: "Enescu's music was and it continues to be fascinating for me, because it is a music that it gradually reveals itself, it has many layers, not only polyphonic, but also of an emotional content, a very complex one. At the same time, it has a spiritual nobility and elegance that I think it described Enescu as a human. It was an honor to win the prize for Enescu Sonata No. 1 in the 2011 edition of the "Enescu" Contest, it is still in my repertoire and I am glad to sing it every time I have the opportunity. I can say that I discover every time, and now, after 7 years, new aspects of this very interesting work."

Structured in three movements - Allegro molto moderato e grave, Presto vivace and Andante molto espressivo, Sonata no. 1 in F sharp minor composed by George Enescu in 1924, was dedicated to the Swiss pianist Emil Frey, but the first audition was held one year later, in Bucharest, in the interpretation of the Romanian composer. The work has since been admired for its originality, but also for the mysterious and strange atmosphere that it releases, being at the same time a technical challenge for any pianist. Mihai Ritivoiu, an in-depth connoisseur of the Enescian musical universe, solves lightly the technical difficulties and, moreover, manages to achieve an efficient contrast between the diaphanous moments and the darker sounds that we find in the first part of the sonata.

Then the pianist lights up with a vigorous touch, the jovial and humorous spirit of the second part, which opens with an exhibition of Fugue style, and then continues with a Scherzo burlesque in a free form that recalls the style of some composers like Maurice Ravel, Claude Debbusy, or Igor Stravinski. We also find in this vivacious Presto, elements inspired by jazz music, but also rhythmic and melodic structures taken from the Romanian folklore. In the last move, Andante molto espressivo, the style of traditional native music returns, but its character is different from that of the second part. A motif in asymmetric rhythm is repetitively crooked, creating the illusion of a distant bell with a chanting effect. The pianist Mihai Ritivoiu reproduces these sound effects with an impressive variety of resonances, but also the passages at the end of the work, embroidered in harmonies of a special beauty, completing this Enescu's first piano sonata, of a rare counterpunch, rhythmic and emotional complexity.

The last recording on this album, Sonata in B Minor by Franz Liszt, was performed by Mihai Ritivoiu and during the recital held at the Radio Hall, shortly after the release of his album. Then in public was also the pianist who was Mihai Ritivoiu's professor at the National University of Music in Bucharest, Viniciu Moroianu, who declared for Radio România Muzical: "Mihai Ritivoiu is a musician of great intellectual and spiritual quality, who is developing very beautiful, always becoming more mature in the elaboration of the musical text with sensitivity and also with erudition. I am glad to see in his works more and more refinement, sound plans, a granite logic construction, contrasting musical characters. His increasingly development makes him a full artist, who calls into question professional problems of great acuity in the sense of the highest European performance. "

Interpreting Sonata in B Minor for Piano by Franz Liszt written in 1853 and dedicated to Robert Schumann, Mihai Ritivoiu offers a unified and cursive version of the musical ideas suggested by the composer. The pianist explains his interpretative vision in the following way: "The virtuosity of Liszt's music always has expressive meanings. By recording this sonata, a masterpiece in the piano repertoire, my main concern was to maintain a sense of the whole while granting each episode enough freedom to unfold naturally and to highlight the various aspects of the work. "Not being structured in distinct parts, the piece is conceived in an ample form of sonata, a unique and inventive structure that made Richard Wagner describe it as "sublime, beyond any understanding." Liszt treats the soundtrack in a continuous thematic transformation, a musical technique that would influence the style of some composers at the end of the 19th century, the most prominent being Richard Wagner. At a superficial look, Sonata in B Minor seems a free-form fantasy in improvised style, but in reality, the entire work is built on the musical ideas of the introduction of the play. Pianist Mihai Ritivoiu feels and renders this profound architectural concept of Liszt, but also the orchestral vision in the piano's writing. Fully versatile artist, Mihai Ritivoiu possesses a wide range of expressive ways, proposing a varied dynamics and surprising sound colors to express the extreme emotions that characterize Sonata in B Minor by Franz Liszt.

I would like to recommend the debut album of pianist Mihai Ritivoiu, for the first time at Radio România Muzical, from January 15th to January 17th, at 11:30, under the CD Review (the show "Arpeggio").