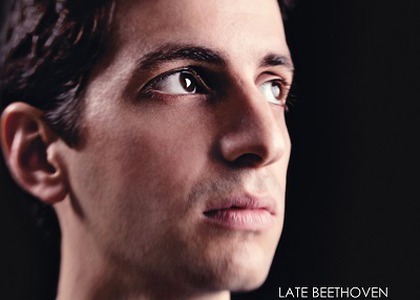 "Late Beethoven" - is the title of the latest album by the pianist Ishay Shaer. Released in November 2017, the disc includes Sonata no. 30 op. 109 in E major, 6 Bagatelles op. 126, 11 Bagatelles op. 119 and Sonata no. 28 op. 101 in A major, compositions from the late works of Ludwig van Beethoven, composed between 1816 and 1825, of which the German musician's biographer, Johann Schlosser, wrote: "The works of this last period are outlined by an inner need. Everything is organically linked to the previous musical text, and doubtful or non-essential elements are excluded. Thus, each composition is a coherent, unique whole. "

Ishay Shaer, a 35-year-old pianist, one of the most appreciated Israeli pianists of the young generation, is valued for his expressiveness and distinctive touch. He studied at the Buchmann-Mehta Music School of the Tel Aviv University with the professors Tomer Lev and Arie Vardi, but he also benefited from the guidance of famous pianists such as Daniel Barenboim, Vladimir Ashkenazy or Murray Perahia. He then won several awards in prestigious music competitions such as the Newport - UK International Competition, the Italian "Silvio Bengalli" Competition and the Bonn International "Beethoven" Competition. As a follow-up to these successes, he was invited to perform concerts on famous European, North and South American stages in the company of prestigious ensembles such as the Lausanne Chamber Orchestra, the Navarre Symphony Orchestra, and most of the important Orchestras in Israel. Lately, the pianist has established himself as a renowned chamber musician, collaborating with cellist Mischa Maiksy, violinist Liza Ferschtman, as well as with the members of the Contempo Quartet, this way making contact with the Romanian musical art. As far as for his repertoire choices, the pianist Ishay Shaer feels comfortable while interpreting romantic compositions. Among his concert and recital programmes works by Chopin, Liszt, Schubert, Mendelssohn, Schumann or Brahms are included. Even among classical composers, the Israeli musician prefers the most romantic, Ludwig van Beethoven, who creates the transition between classicism and romanticism. His music highlights the pianist's robust touch, his flawless technique, the remarkable virtuosity, but also his poetic sense. Shaer proves that he is a dramatic performer of Beethoven's music, who feels and deepens the expression behind the musical text.

In the opening of the album, the pianist plays Sonata no. 30 op. 109 in E major, dedicated in 1820 to Maximilian, the daughter of the composer's friend, Antonie Brentano. Written after the famous Hammerklavier sonata, a work with massive structures, Sonata no. 30 contrasts with significantly reduced dimensions and impresses with its intimate and disturbing character. Pianist Ishay Shaer intuitively understands these features of the play. In the first part, the musician alternates with refinement the effervescence of the fast sections with the melancholy of the slow-tempo rubato, Adagio espressivo, creating the atmosphere of a fantasy with eccentric color spots and passages with a seemingly improvising character. The middle part, in which Beethoven renounces the traditional slow tempo for a Prestissimo in a ternary rhythm, is played by Ishay Shaer with vividness and agility, the dynamic palette rising from shades that are barely perceptible to grandiose sonorities. The final part, Andante molto cantabile e espressivo, contains a theme with 6 variations in which coral textures appear, but also elements inspired by the baroque counterpoint, rendered by Ishay Shaer with a warm and diaphanous stamp.

Next are the 6 Bagatelles op. 126, published in 1825, miniatures of a unique delicacy, embroidered with sound details that look like gems, polished with carefulness. Ishay Shaer's interpretation is full of charm and candor, emphasizing the choral sounds, suave, interrupted only in the second and fifth swings through a vigorous sound speech. The pianist recounts clearly the serene atmosphere that transpires in the Bagatelle op. 119 by Beethoven.

The last work on this disc is Sonata no. 28 op. 101 in A major composed by Ludwig van Beethoven in 1816 and dedicated to pianist Dorothea Ertmann, a composition that marks the beginning of the composer's last stage of creation. With this work, musical forms become more complex, the polyphonic layers are enriched, and themes and motifs get sophisticated outlines. Sonata no. 28 for the piano has an intimate, sometimes introspective character, exploring fantastically new means of expression. These seem to match the sensitive nature of pianist Ishay Shaer, which gives us an exciting version of this work, but also of the other three tracks on the album "Late Beethoven". In addition to the outstanding artistic level, I also notice the technical quality of the recordings, the producer of the disc at the Orchid Classics house being Andrew Keener, one of the most respected specialists in the classical music world, winner of a Grammy Award.

You can listen to the album "Late Beethoven" on January 25 and 26 at Radio Romania Musical, at CD Review, during the "Arpeggio" show.