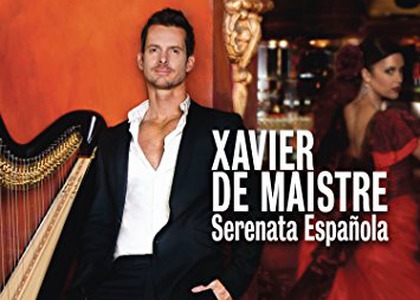 Xavier de Maistre is one of the greatest harp players in the world, with a rich activity involving concerts, discs and teaching, an artist with a remarkable virtuosity and a charming stage presence who offers music lovers personal, dinstinctive performances by taking the harp to the next level of the musical world. Given that recitals and concerts that feature the harp as the main attraction are quite rare on the international stage, Xavier de Maistre wants to change the public perception about the harp and enrich the repertoire for this instrument. Born in 1973 in Toulon, the French artist began his study of the harp when he was nine, at the Conservatory in his native town. He would later perfect his technique in Paris, with professors Jacqueline Borot and Catherine Michel, while at the same time studying Political and Economic Sciences in London. When he was 16, Xavier de Maistre began taking part in competitions for his instrument, winning important prizes it musical competitions in Paris, Munich, Vienna and Jerusalem. In 1998 he won the first prize at the International Contest in Bloomington, Indiana, the most prestigious harp competition in the United States. Immediately after this success, he was employed by the Vienna Philharmonic. In the years to come, the artist performed in concert in the company of famous conductor such as Lionel Bringuier, Daniele Gatti, Kristjan Järvi, Riccardo Muti, André Prein, Sir Simon Rattle and Yuri Temirkanov. Besides his concert activity, Xavier de Maistre has made a name for himself as a dedicated professor: he has been teaching the harp since 2001 at the Music Academy in Hamburg and often gives masterclasses at the Juilliard School in New York, the Toho University in Tokyo and the London's Trinity College of Music.

Regarding his discography, the French artist - who has a contract with Sony - has by now recorded ten albums, with music from various stylistic, areas, from the Baroque to the contemporary. Among the composers: Antonio Vivaldi, Joseph Haydn, Wolfgang Amadeus Mozart, Claude Debussy, Joqauin Rodrigo and Alberto Ginastera. One of the artist's most successful discs, recorded in 2008 and dedicated to Claude Debussy, won him an Echo Klassik award for "Best Instrument Player of the Year".

At the beginning of this year, Xavier de Maistre released a new album called Serenata española and features works from the Classical and Romantic periods as well as from the last century. This is the disc I will be presenting on the 29th and 30th of January, for the first time at Radio Romania Music, an album included in the project Discs of 2018. The CD features works written by Spanish composers in arrangements for the harp and castanets, performed by Xavier de Maistre in collaboration with Lucero Tena, castanets player, a legend of flamenco music. They met through Spanish conductor Jesus Lopez Cobos. Maistre was impressed by Lucero's personality and life story, so the two immediately decided to record a repertoire they had in common, Spanish music. Actually, this is not Xavier de Maistre's first disc featuring Spanish creations: in 2010, he recorded an album called Aranjuez with the Vienna Broadcast Symphonic Orchestra conducted by Bertrand de Billy. This time, the artist performs works in arrangements for solo harp from well-known composers such as Isaac Albeniz, Antonio Soler, Manuel de Falla or Francisco Tárrega, but also pieces that are less known and performed on stage or in recording studios, composed by Joaquin Malats, Eduardo Lopez Chavarri or Gerónimo Giménez. The harpist shows he is a complete artist and even though he has a fresh and original view he performs the works with stylistic thoroughness, whether it be Antonio Soler's late Baroque music, the classic sonata signed by Mateo Albeniz, the Romantic perfume in Francisco Tarrega's music or the modern sonorities imagined by Jesús Guridi Bidaola. All of this is, of course, influenced by the Spanish musical folklore. Its melody is naturally acknowledged by harpist Xavier de Maistre. Although not a native of Spain, he feels comfortable in the country's musical repertoire, offering us an interpretation that is full of passion, strength and sharpness.

If you want to be absorbed by the harmonies of the Spanish music interpreted in an original and creative manner by Xavier de Maistre at the harp, I invite you to tune in to the Radio Romania Music frequencies Monday, January 29th, and Tuesday, January 30th, starting from 11.30, and listen to the "CD Review" section during the show "Arpeggio".