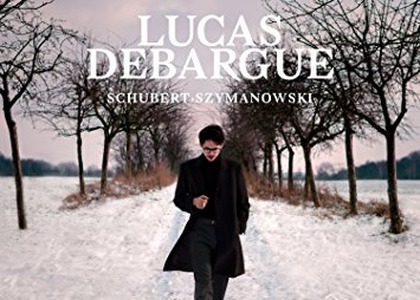 The piano player Lucas Debargue, one of the most talented and maverick piano player of the young generation, born in Paris in 1990, is appreciated for his artistic and original perspective and for his creativity, drawing inspiration from literature, painting, cinematography and jazz, in order to flaunt a personal and interpretative style and a repertoire carefully selected. Moreover, his career path has been uncommon: he started to study piano relatively late, when he was 11- years-old, and then, not longer after, he reoriented towards literature, graduating from Paris Diderot University. Although he focused on this domain, he found the time to explore the representatives pieces from the repertoire dedicated to piano. Only when he was 20-years-old, he return to study the piano in a professional way, after an encounter with the famous professor Rena Şereşevskaya, who offered him the possibility of improving himself within her classes, at The École Normale de Musique de Paris "Alfred Cortot". From that moment have passes only four years until the most important success of Lucas Debargue - the IV place at the final of the prestigious contest "Ceaikovski" from Moscow, edition 2015. At the same time, he gained the coveted Prize of Moscow Music Critics, for his "incredible talent, for his artistic perspective and for his creative freedom". Therefore of these distinctions, the 27-years-old piano player has been invited to perform on famous stages from Europe, North America and Asia, together with conductors as Valery Gergiev, Mihail Pletniov, Vladimir Spivakov or Tugan Sokhiev. But, just as significant for his ascension it was the signing of the contract with Sony Music Entertainment, soon after the contest in Moscow. Since then, the piano player has recorded four albums, his accomplishments being already remarked and rewarded: last year he received the prestigious prize "Echo Klassik" and, a few days ago, he has been nominated to 25th edition of the prizes "Les Victoires de la Musique Classique", for the section "Instrument player", the award gala being on February 23th.

From the discography of Lucas Debargue, I suggest you his most recent album, launched in November 2017. In his new album, the artist is still exploring the little-known music, proposing that, beside two representative plays from the creation for the piano - Sonata no. 13 and no. 14 by Franz Schubert, a monumental work, but rarely performed, Sonata no. 2 written by Karol Szymanowski in 1911. The piano player says the following about his choice: "I feel that is a grand duty to dig further in these works already known by famous musicians and by the public, such as the sonatas by Schubert, especially the one in La major, but, equally, to offer the chance to the listeners to discover some works that they can't hear too often". In his performance, Lucas Debargue transmits intense emotions and sometimes darkened, such as Sonata no. 14 in La minor by Schubert and the one by Szymanowski, thereby creating the connections between the two works which, at first glance, they look different. The melancholy and the dreary and mysterious atmosphere which characterizes the sonata by Schubert are perfectly reproduced by the piano player. In the second part, Andante, runs through the nostalgic personality, but in the major tonality and in the slowly beat, in an elegant and audible speech, by a peculiar tenderness. And in the final move, Allegro vivace, the piano player alternates with refinement the moments of tension and the moment of relaxation, flaunting a pearly technique and frantic resonances.

The second work from the album is Sonata no. 13 D 664 in La major written in 1819. His lyrical and optimistic spirit is characterizing this piece which the piano player Lucas Debargue is approaching with naturalness, in a mature, authentic and brooding manner. In the first part, Allegro moderato, the sophisticated and serene performance of the musician sheds light on the melodious character of the audible speech, following the second part, Andante, which senda an intimate and poetical atmosphere. And the final, Allegro, is played vividly by the piano player Lucas Debargue, who offers us a personal interpretative and convincing version of the Sonata no. 13 in La major by Franz Schubert.

The last work from this album of Lucas Debargue is Sonata no. 2 op. 21 in La major by Karol Szymanowski, written between 1910-1911 and dedicated to Nataliei Davidoff, a friend of the composer from Russia. The first audition took place on December 1st at Berlin, in the performance of the piano player Artur Rubinestein, who presented the work few day after in Munich, Krakow, Vienna and Leipzig. Although is not a well known work and not often performed in our days, Second Sonata by Szymanowski has beneficiated of so many remarkable recordings versions - the first, from 1950, belongs to the piano player Sviatoslav Richter. After this one came other recordings by piano players like Martin Jones, Raymond Clarke, Martin Roscoe, Sinae Lee, Peter Schmalfuss and Anu Vehviläinen, the most recent one being performed by Lucas Debargue. The French piano player is not at his first try to bring in front of the public little-known works, including in his repertoire works by Nikolai Medtner, Nikolai Roslavets and Milosz Magin, but his own creations, too. Regarding Sonata II by Szymanowski, the performance of Lucas Debargue is similar to the one by Sviatoslav Richter, exploring the gloomy and swirling personality of the work. The momentous sonata is written in a neo-romance style, with a harmonic and unusual language, being in a constant tonal instability. The incandescent, odd and always restless atmosphere leaves no room from a poem in the performance of Lucas Debargue. However, the technique difficulties of the work highlights the virtuosity, agility and strength of the piano player. Sonata in La major by Szymanowki is a work of significant size, with elaborated textures and complex audible plans, a play about the composer himself said: "I don't think that someone someday will have to courage to perform it, because is long and almost diabolically hard". The piano player Lucas Debargue gets lightly through the technical and complicated details and, moreover, he offers us a profound interpretation, with comprehensive and thriving sonorities.

The album "Lucas Debargue - Schubert, Szymanowski" can be heard on Radio Romania Music frequencies at "CD Review", on the program "Arpeggio" (starting from 11:30 o'clock ), on January 31th and February 1st and 2th.