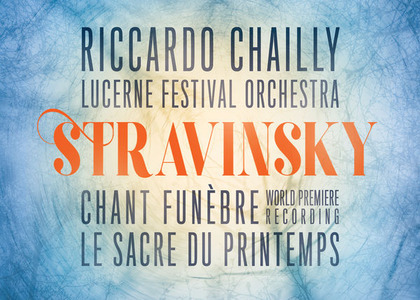 A special album that has been already talked about, an expected CD with a world premiere work, an opposite by Igor Stravinski. Yes, there is a work by Igor Stravinski, an important work whose score had been lost after the premiere from 1990. It was rediscovered in 2015 in the archives of the Conservatorire from Sankt Petersburg and performed for the first time after more than 100 years in December 2016. This work is called Chant funebre - "Funeral dirge" by Igor Stravinski, of whom the conductro himself said that is his most important work before the ballet "Firebird". Stravinski dedicated this work to his professor, who passed away on 21th of June, 1908.

Decca Records obtained the excusivity for recording this "Funeral Dirge" by Igor Stravinski; the CD was launched on 12th of January, 2018 and is signed by Lucerne Festival Orchestra, conductor Riccardo Chailly.

Between 1907 and 1909, Stravinski wrote, apart from this "Funeral Dirge", other four works which have been included on this CD. The cycle of songs op.2 The Faun and the shepherdess was written in 1906 in a language rather romantic, with impresionist tones in places, in which we cannot regonise that much the style of Stravinski from "Funeral Dirge" or "The Rite of Spring". The lead singer in this recording is the mezzo-soprano Sophie Koch.

The following from the creation of Igor Stravinski are op.3 and op.4, composed in 1908: Scherzo fantastic and The simphonic fantesie Fireworks - in which the neo-romatic language with impresionist tones still has something important to say.

The touchstone from the proposed repertoire from this CD is without doubt the music of the ballet "The Rite of Spring" by Igor Stravinski - the emblematic work of the Russian conductor enjoyed throughout the time so many versions of reference. As we all know, the festival from Lucerna is one of the most prestigious summer events from Europe - and with a history that starts before the second World War Two. The orchestra of the festival, with its current version, has a history for almost 20 years. Claudio Abbado took a personal interest in the selection of the members, among them being found musicians from the Berliner Philharmoniker, London Symphony Orchestra or Vienna Philharmonic Orchestra. The Orchestra reunites during these 3 weeks of festival, every summer, ten days before the repetition. Since 2015, after the death Claudio Abbado, Riccardo Chailly has been claimed the new musical director, the Italian maestro who currently runs the famous opera Teatro alla Scala. So here is a notoriuous conductor who runs an ad-hoc orchestra - the recording of The Rite of Spring ballet, a difficult and very demanding score, could have been risky, but Chailly and the Orchestra of the Festival from Lucerna took a chance and...have won: on the CD you will find a version full of energy, extremely precise from a techincal point of view and which captures perfectly the rythm of the music.

The CD can be listened for the first time at Romanian Radio Music on Monday, 29th of January at 19.00 o'clock and on rerun on Sunday, 4th of February at 13.05 o'clock.