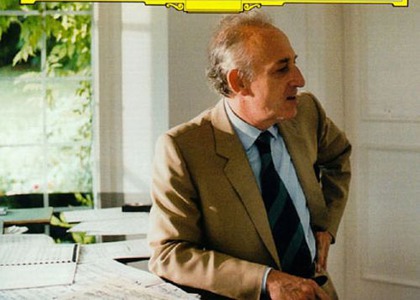 The latest album of the well known piano player Maurizio Pollini will be released at the end of this week, on the 16th of February, by the record label that represents the Italian musician, Deutsche Grammophon. Before the release of the album, you have the chance to listen to it in its entirety, for the first time, on Radio Romania Music during the project "The albums of 2018". The album is not the first one in Maurizio Pollini's discography that includes music by Claude Debussy, the experimented artist having recorded in 1999 an album with the first book of Preludes and the song "The Island of Joy", both belonging to the impressionist musician. This time, Pollini presents to us the second book of Preludes and the Suite "In Black and White" for two pianos, which he interprets with his son, Daniele. Actually, the musician was expected to dedicate an album to Claude Debussy in 2018, since a century passed since the French composer passed away, his commemoration being celebrated by the majority of the piano players and the record labels. While listening to Maurizio Pollini you will notice that he is an amazing interpret of Claude Debussy. The last years, the musician that already turned 76 on the 5th of January, was admired for his clarity and elegance during performing, being sometimes criticised for his austerity and for holding back his emotions. I would say that this criticism doesn't apply to Debussy's music, to which Pollini offers effulgence and sophistication, managing to transpose to us the particular resonant world that describes the creation for piano of said composer, therefore expressing emotional states of a profound reverie, especially in the case of slow songs and the piano nuances. The songs connote various images and emotional states through lights and shadows, through misty sonorities, all of these being portrayed in a discrete lyricism and fantesy by piano player Maurizio Pollini. Playing with clever timbral effects and contrasting nuances, the musician creates vague but delicate melodic lines full of harmony and refinement.

Winner of the presitigous International Chopin Piano Competition from Varsaw in 1960, Maurizio Pollini impressed the great Arthur Rubinstein, who said back then that Pollini had a better piano technique that any of the members of the jury. As a result of that performance, Pollini improved by playing Chopin's Concerto No.1 at the Scala Theatre in Milano under the guidance of Sergiu Celibidache, concert which he later recorded for his first album. That was followed by a stupendous concert activity and discography, the musician creating dozens of albums with baroque, classic, romantic, modern and contemporary creations, albums which where rewarded with Gramophone, Echo Klassik, Diapason d'or and Grammy awards.

You can listen to the Debussy album created by Maurizio Pollini on Radio Romania Music on the 12th and 13th of February, at 11:30 a.m. at CD Review (during the show "Arpeggio") or any other time on the website of the project "The albums of 2018".
Larisa Clempuş
Translated by Gheorghe Roxana Cristina,
Universitatea București, MTTLC, An I
Return to archived Clasic