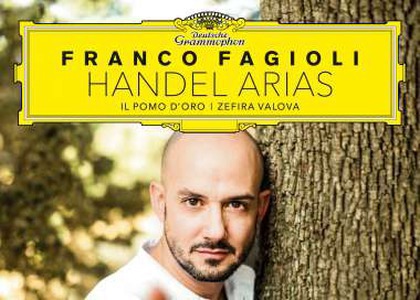 Handel arias is countertenor Franco Fagioli's latest album, released only a month ago, on January 12th 2018 by Deutsche Grammophon. In July of 2015, he became the first countertenor in the history of the prestigious record company to ever appear on the "yellow label". After recording the opera Orpheus and Eurydice by Gluck, Franco Fagioli recorded his first recital CD, featuring arias by Rossini. With Handel arias, Franco Fagioli is at his second solo album as an exclusive Deutsche Grammophon artist. A bright voice, shining top notes, vocal virtuosity, Latin temperament and last but not least a very pleasant stage appearance - these are the charismatic Argentinian artist's qualities. He is a specialist of the baroque. For his new album, Franco Fagioli explored the Handelian repertoire, choosing twelve of his favorite arias. "When I made the selection", explains Franco Fagioli in the album's official trailer, "I tried to choose the arias that speak to me in different ways… the arias that I felt I could have written myself, either lyrically or musically…"

Franco Fagioli is currently the best interpreter of Handelian works, recognized both for his exceptional vocal range - three octaves - and the perfection of his vocal agilities. Georg Freidrich Handel - says the Argentinian artist - "is the composer I have always been impressed by. I like to think that Handel was the composer who knew how to put his soul in the service of music." The singer's enthusiasm for Handelian creation is infectious for the listener. The splendor of baroque also radiates in the twelve arias selected for this album. Franco Fagioli thinks that these are the most beautiful arias in all of Handel's creation. In his journey through Handel's works, the artist was accompanied by members of the Pomo d'Oro baroque ensemble. "It's wonderful working with these musicians, I can say we're there together to perform this extraordinary music that we rediscover with every interpretation", said Franco Fagioli. The Argentinian artist, alongside the musicians mentioned above, is currently on a publicity tour for the album. By March, they will have completed a circuit in the main cities of France, Germany, Belgium and Spain.

Over the five editions of "Opera and its stars", you can hear the album in premiere on Radio Romania Music. The CD was released on January 12th and is included in the project "Discs of 2018". (Monday, February 12th - Friday, February 16th, starting at 11:00)