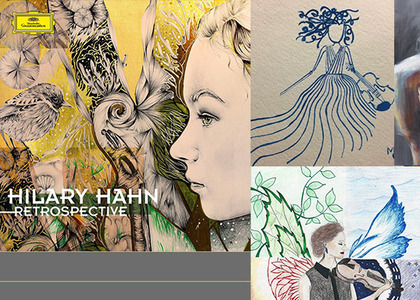 At Radio România Muzical I propose you an album released in January 2018, released by one of the world's most valuable violonists, with three Grammy awards and not less than 17 albums recorded so far. It's about Hilary Hahn, who first recorded her 17-year-old album (approaching then the difficult suites and sonatas for the solo violin by Bach), a track followed by albums that were equally appreciated for Sony and Deutsche Grammophon . The last record label which represents the American violinist released on January 19th this year a retrospective album that includes selected works from the 12 discs recorded so far for the German house by Hilary Hahn, as well as new recordings made within a concert at the Meistersaal in Berlin. An interesting aspect of these recordings is that they are made using a rare technique called direct-to-disk, highly technically and artistically demanding for the performer, as it does not involve any subsequent editing or mixing of the sound. Thus, the listener has an authentic experience that is as close as possible to the one lived in the concert hall. In this way was recorded the first work on the album, Sonata KV 379 in G Major by Wolfgang Amadeus Mozart performed by Hilary Hahn on May 8, 2016, along with North American pianist Cory Smythe. In the last few years he has been her violinist stage partner in chamber music projects.

Another unusual detail is that the realisation of the cover of the album belongs to the fans of violinist Hilary Hahn. She organized on the social networks a graphics contest for the release of the disc, the cover and many of the images inside the album being the result of that contest, about which the violinist says: "For many decades I have enthusiastically received the art of my fans, original works of visual art which were presented to me by those who constantly come to my concerts. I really appreciate the creativity and the time they spend on these pieces. Because their art has meant a lot to me over the years, I wanted to put it in my most recent album, "says violinist Hilary Hahn.

The 38-year-old American artist is a passionate performer of contemporary art, including in her repertoire, alongside well-known Baroque, classical and romantic works, some works dedicated to her by composers such as Edgar Meyer, Jennifer Higdon, or Anton Garcia Abril, some of which are featured on the Hilary Hahn encore album in 2013, which received the Grammy Award and resumed on the Retrospective album. On this album we can find the Blue Curve of the Earth, composed by Tina Davidson, a musician born in 1952 in Stockholm and established in Pennsylvania, United States of America. The composer's creation, which includes chamber and orchestral pieces, is distinguished by an elaborate style, with disturbing, almost hypnotic melodies, repetitive rhythms, concise structures and sophisticated harmonies. Equally interesting is Mercy's work belonging to Max Richter, the famous British composer, representing the minimalist style; an elegiac piece with monotonous rhythms, slightly fluctuating towards the end and simple and clear melodic lines, but with a sad atmosphere and emotional intensity taken to the extreme. Hilary Hahn, violinist, plays the songs with naturalness and seems comfortable with this type of music, her style of interpretation being retained, but loaded with emotional vibration.

The same retrospective album includes one of the most popular creations in the British repertoire, The Lark ascending by Ralph Vaughan Williams inspired by the poem with the same title of English poet George Meredith. The play was dedicated to violinist Marie Hall who presented her at the first audition in 1920. Violinist Hilary Hahn included this work on her 2004 record with the Symphonic Orchestra in London directed by Sir Colin Davis. With the support of one of the most exciting ensembles of the world, the soloist manages to offer unity and cursivity to the work by building a long-lasting sound discourse. ItShe has a fine control of the sound, which gives to it a special glow and grace, the vibrato style being balanced and adapted to the expressive content of the music. Hilary Hahn is undoubtedly an elegant musician whose impeccable recordings are characterized by balance, sobriety and technical accuracy.

Born in 1979 in Lexington, Virginia, the artist began studying the violin before she was four years old, and at age of 10 she was already admitted to the Curtis Institute of Music in Philadelphia where she studied thoroughly the mystery of the violin with Jascha Brodski. A debut concert followed later with the Symphonic Orchestra in Baltimore, an event received with enthusiasm by the critics. Since then, the violinist's career has evolved continuously, she evolved on world's renowned scenes along with the most valuable ensembles, including the Cleveland, Philadelphia, Pittsburgh, London, Concertgebouw in Amsterdam, New York Philharmonic Orchestras and the Bavarian Broadcasting Orchestra. Hilary Hahn has also been involved in chamber music projects, collaborating in the course of time with pianists Cory Smythe, Valentina Lisitsa, Volker Bertelmann and Natalie Zhu.

Selections from Hilary Hahn's Retrospective album will be broadcast at CD Review during Arpeggio on February 26, 27 and 28, 2018 at 11.30.