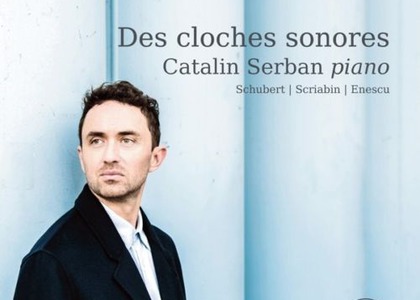 On March 8th and March 9th, 2018, I propose you to listen to the debut album of pianist Cătălin Şerban, as part of the project "Discs of the Year 2018" at Radio România Muzical. The 38-year-old pianist, born in Bucharest and established in Berlin, recorded his album at Univerisity of Music in Lübeck, where he is a lecturer at the piano department. For this disc released last month, Cătălin Şerban chose three works - Suite no. 2 op. 10 Des cloches sonores, which also gives the title of the compact disc, Sonata op. 78 D 894 in G Major by Franz Schubert and Sonata no. 5 op. 53 by Alexander Scriabin. About his repertory choice, the pianist says, "While looking for interesting correlations and similarities between works and composers who, for a long time, have excited me and inspired me, I found these three completely different stylistic compositions, yet linked by their motives that imitate the sounds of the bells. In Op. 10 by Enescu these are distinguished in all four parts of the work, but in dynamic levels, atmosphere and different sound colors ». This work was composed by George Enescu in 1903, at the age of 22, for a competition organized by Paris Musica, receiving the first prize. At that time, the composer experienced different musical directions, from the influence of the Romanian folklore to the Neoclassical and Neo-Baroque style, including elements specific to Impressionism. All this is to a greater or lesser extent in the Op. 10. The form of the work is inspired by the baroque dance floor structure, consisting of four parts: Toccata has a seemingly improvising character, highlighting the virtuosity of the artist over the whole extent of the keyboard. Pianist Cătălin Şerban presents here the technical dexterity and the special force; Instead, interpreting Sarabanda, a solemn dance and Pavana with a similar character in a slow tempo, the pianist carries us in a mysterious sound universe with nostalgic melodies and harmonies. The final part, Bouree, returns to the ludicrous and cheerful spirit that we find in the debut of the op. 10 Suite by George Enescu.

Four years after the Suite op. 10 was composed by George Enescu, Russian composer Alexander Scriabin finalized his op. 53 Sonata and wrote to Margarita Morozova, a member of a wealthy family in Russia, who financially supported the composer: "Today we have finished the fifth sonata, in fact a great poem for piano, and I think it's the best of all my piano compositions. " Scriabin's sonata differs in many ways from the first pieces of this kind in its creation: it is first conceived in a single wide motion, then it is the only sonata without indications of tempo, leaving room for a subjective interpretation by the pianist. There is also an extremely complex rhythmic palette in this score, while the melody is simple, completely cleansed by any kind of ornaments, unlike sonata no. 6 of the same composer. The work of extreme difficulty does not seem to pose any particular problems to pianist Cătălin Şerban, who builds the sound discourse thoroughly; he starts from the shades that are barely perceptible to those of an impressive extent to reveal the expressive intensity of Sonata no. 5 op. 53 by Alexander Scriabin.

The Sonata D 894 in G Major by Franz Schubert is the romantic choice of pianist Cătălin Şerban for his album. About this work, he says, "It's a play with which I have a long and close connection. What influenced me a lot in interpreting the famous introductory part of the sonata was the contemplation of the long, expansive chords that sounded like they were made by a remote bell in a tranquil and deep landscape. " In order to implement his musical ideas, pianist Catalin Şerban uses a soft, sweet sound, interrupted only in the passages of a pronounced dramatism that appear from time to time in the first part of the paper Molto moderato e cantabile, and the third, Menuet.

Born in 1978, pianist Cătălin Şerban studied at "George Enescu" Music High School in Bucharest. He has won several awards in national and international competitions, including the piano contests in Sennigallia and Bremen, which have widened his artistic horizons. He received a scholarship that allowed him to deepen his music at the Berlin University of Arts and at the Paul Hindemith Society with professors Martin Hughes and Laslo Simon. Since the period of his studies, he has been a passionate performer of chamber music and soloist, supporting concerts and recitals at the Romanian Athenaeum or at the Berlin Philharmonic and at prestigious festivals in Germany. As for his work as a teacher, in 2007, after completing his Master Degree at Musikhochschule Lübeck, Cătălin Şerban earned a post of university lecturer at the university's piano department where he is currently working. In terms of stylistic affinities, the pianist focuses on the latest appearances on the romantic line, showing predilection for Schubert and Chopin, but also for Rahmaninov, Skriabin or Ravel.

You will be able to listen to the album Des Cloches sonores of pianist Cătălin Şerban at Radio România Muzical, on March 8 and 9, at the CD Review, during the Arpeggio show, at 11.30.