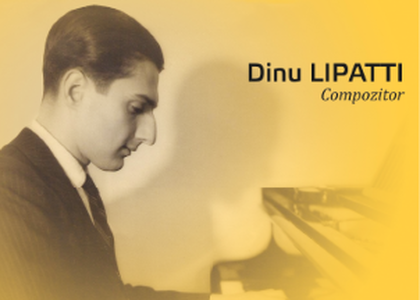 The album 'Dinu Lipatti, Composer' on CD Review, on the 5th, 6th and 7th of March

2017 marked the hundredth year anniversary of the birth of Dinu Lipatti, one of the most important pianists of all time who, even though he only lived for 33 years, also asserted himself as an iconic Romanian composer. Tributes to the legendary pianist were brought last year through different large scale events, both in Romania and abroad, as Lipatti's art was and is loved everywhere in the musical world. The anniversary was also marked by Editura Casa Radio, that released the CD Dinu Lipatti - Composer during a concert at the Radio Hall on December 1st, 2017. Musicologists Monica Isăcescu and Ștefan Costache (show hosts at Radio Romania Music), the authors of the texts found in the preface to the CD, were present at the event. Here is an excerpt from their presentation: «the works signed by Dinu Lipatti show a constant preoccupation for the composition, marked by certain evolutionary stages (from Romanian folk influences to the neoclassical and modern thought, a result of his experiences in Paris and Switzerland, synchronized with the language of the contemporaries he held in such high regard, such as Bartók or Stravinsky), and consolidate our belief that, in the years of maturity, Dinu Lipatti would have become a point of reference in European classical music».

The Romanian composer's creation consists of over 50 works, some of them now lost. Four representative pieces by Lipatti are also featured on the CD released by Editura Casa Radio, which you can listen to in premiere on Radio Romania Music. The first two works, the Sonatina for the Left Hand and Concertino in Classical Style, recorded in 1943, are performed by the author himself. The other two works included on the album are the Fantasy for Piano Solo performed by Viniciu Moroianu and the Symphonic Suite «Șătrarii» recorded in 1997 by the National Radio Orchestra conducted by Horia Andreescu.

Born on March 19th, 1917 in Bucharest, in a family with a musical background, Dinu Lipatti made his public debut at the age of 5 on the stage of the Romanian Athenaeum, when he also started studying the piano with one of the most appreciated and demanding professors, Florica Musicescu. She offered him a rigorous artistic education and the opportunity to develop his native talent. Lipatti continued his studies in Paris, where, on March 20th, 1935, he performed his first recital and was enthusiastically received by audience and critics alike. From that moment on, Lipatti's career went steadily upward. The pianist went on successful tours in Italy, Switzerland, Germany, the Netherlands, France, Belgium and Great Britain. Among Lipatti's close collaborators were famous artists like violinist Arthur Grumiaux, conductors Charles Munch, Paul Sachr, Ernest Ansermet or Herbert von Karajan. Dinu Lipatti is considered even today, 67 years after his death, one of the best performers of all time. His recordings, despite all the technical imperfections of the first half of the last century, remain living documents that bring his piano artistry and skills into the present, as Dinu Lipatti is a model for young pianists from the newer generations. His performances are perfectly balanced, showing spiritual nobility and a high degree of artistic perfection. You will be able to hear this once you listen to the pianist play the Sonatina op. 10 for the Left Hand, one of the composer's most performed pieces, dedicated to his maestro, Mihail Jora. The recording was made two years after the first ever audition, which took place during an anniversary concert dedicated to Mihail Jora's 50th birthday. The work - which Lipatti described as having «a Romanian theme that shines quite a lot» - shows the modern way in which the composer made use of Romanian folklore.

The next piece on the CD is the Concertino in Classical Style op. 3 for Piano and Chamber Orchestra, recorded by Dinu Lipatti in 1943 alongside the Berlin Chamber Orchestra conducted by Hans von Benda. Written in 1936, the work was first heard three years later, with the composer as the soloist and George Georgescu conducting the Bucharest Philharmonic Orchestra. The opus remains Dinu Lipatti's most famous work. This is how he characterized it: «I composed the Concertino in Classical Style in Paris in a time when I was fascinated by Stravinsky's neoclassical innovations and was heavily influenced by the counterpoint way of writing that was imposed by the professors leading my studies, and especially by Nadia Boulanger. In this small 18th century pastiche, with an obvious Italian approach, I wanted to create a climate favorable for free expansions of the solo instrument, while at the same time maintaining a tight dialogue between it and the orchestra comprised of 2 oboes, 2 bassoons, kettledrums and chord instruments. The score of the piano is transparent and almost never goes beyond two voices; the orchestra, on the other hand, enjoys a more polyphonic treatment and freer writing.»

The Fantasy no. 8 by Dinu Lipatti is the composer's most complex piano work. His intention was to orchestrate the piece in such a way as to transform it into a symphony. In an interview, Lipatti had this to say about this opus: «In the introduction we can distinguish two generative elements of the entire work; the first - rather nostalgic -, the second - fierce, bold, agitated. Then come two movements that, together with the introduction, form the first part. The finale comes close to the form of a sonata and leads to the expressive enhancement of the basic motifs.» With a structure of five parts opposed in character to one another, the Fantasy no. 8 combines the parlando-rubato tempo and the modal harmonies found in folklore and in Enescu's works with modern elements of language. The work, dedicated to pianist Madeleine Cantacuzino, the composer's wife-to-be, was presented in a first audition in Bucharest on May 12th, 1941 by Dinu Lipatti himself. 50 years later, another Romanian pianist, Viniciu Moroianu, received the Prize of the Dinu Lipatti Foundation in Bucharest for restoring and interpreting the Fantasy no. 8. The pianist also recorded the work in 1997 in the Radio Romania studios. The recording is included on the album released by Editura Casa Radio in December 2017. Viniciu Moroianu, one of the most appreciated pianists of the Romanian musical stage, with an intense artistic activity, hundreds of stage appearances, but also a prestigious career as a professor at the Bucharest National University of Music, is a profound connoisseur of Dinu Lipatti's art. He edited first editions of several works signed by Lipatti, and in 2005 he received the title of Doctor of Music for his thesis Două secole de gândire componistică reflectate în creația pentru pian solo a lui Dinu Lipatti (Two Centuries of Compositional Thought Reflected in the Piano Solo Works of Dinu Lipatti). With regards to the composer's Fantasy op. 8, in an interview for Radio Romania Music with my colleague, Ana Diaconu, pianist Viniciu Moroianu characterized it as being «a grandiose and bold piece, a very modern music which shows a 23-year-old Lipatti that had mastered some extremely advanced compositions methods». The interpretation given by Viniciu Moroianu is impeccable, full of dynamism, subtly contrasting the melancholic and agitated sections, the latter being of a tremendous technical difficulty.

The last work on the album, the Șătrarii Suite, had its first audition on January 23rd, 1936, with Mihail Jora conducting the Bucharest Philharmonic Orchestra. It's the most ample orchestral piece by Lipatti and it won First Prize at the George Enescu Composition Contest in 1934 and the Silver Medal of the French Republic in 1937. The subject of the suite is the life of gypsy travellers, with influences from city folklore, with each section having a suggestive title: Vin șătrarii (The Travellers Are Coming), Idilă la Floreasca (Idyll in Floreasca) and Chef cu lăutari (Party With Fiddlers). The National Radio Orchestra, under the baton of Horia Andreescu, a fine connaisseur of Dinu Lipatti's creation, gives an excellent performance, with a rhythmic impetus in the first and last sections. The second part, pervaded by the melodies of the Romanian urban folklore, has slow melodic lines in a rubato style, interpreted with great pathos by the National Radio Orchestra.

The album Dinu Lipatti - Composer is included in the project Discs of 2018 on Radio Romania Music and will be broadcast on the 5th, 6th and 7th of March on CD Review from the show Arpeggio, starting from 11:30.