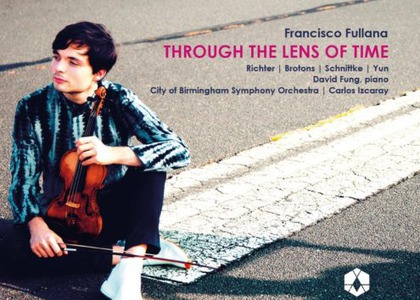 The disc I want to present to you between March 20 and 22 is the newest CD of the Orchid Classics record label, released right at the beginning of this month. It's the debut album of Spanish violinist Franisco Fullana, one of the most promising young musicians of the moment. In the preface to the album called Through the lens of time, the violinist writes: "I invite you to join me on a journey that takes us to a musical crossroads. My disc brings together modern perspectives on Baroque tradition: a dialogue between the new and the old that stimulates composers and performers alike to explore the music created by the titans of the past and to find its place in the present." Francisco Fullana's album features the cycle of the famous Seasons concerts for violin and orchestra by Antonio Vivaldi reimagined by contemporary composer Max Richter, but also works by Isang Yun, Alfred Schnittke and Salvador Brotons, inspired by the Baroque and recorded with the Birmingham Symphonic Orchestra under the baton of Venezuelan conductor Carlos Izcaray.

In the recordings you will be able to admire supple and clean sound of the soloist whom the great conductor Gustavo Dudamel praised and described as an extraordinary talent. The works selected for the disc emphasize the finesse, the rhythmic and melodic accuracy in Francisco Fullana's performance. The musician plays a Guarnieri violin crafted in 1735.

Born in a family of professors, Francisco Fullana studied music in his hometown of Palma de Mallorca before attending master classes at the Royal Conservatory in Madrid with Manuel Guilen. He then further studied the violin at the Juilliard School and the Thornton University of Music under the guidance of Donald Weilerstein and of renowned violinist Midori. All this lies at the base of Francisco Fullana's career - he won prizes at important competitions and performed in concert on stages in Europe, Asia, North and South America. His qualities were already acknowledged and rewarded in 2014 and 2015 with the first prize in the Johannes Brahms competition in Austria, the Munetsugu Angel in Japan and the Pablo de Sarasate in Spain. In 2015, Francisco Fullana was also awarded the Pro Musicis International Award. As a result of his achievements, the Spanish artist was invited to perform in the company of conductors such as Sir Colin Davies, Gustavo Dudamel and Josh Weilerstein and also of renowned ensembles such as the Munich and Madrid Broadcasting Orchestras, the Saint Paul Chamber Orchestra, the Vancouver and Birmingham Symphonic Orchestras.

The main attraction of the album Through the lens of time is Max Richter's music. Max Richter is one of the most famous contemporary composers, an important representative of the minimalist style. In 2012 he released the album Recomposed by Max Richter: Vivaldi - The four seasons that features the well-known cycle of baroque concerts for violin and orchestra by Antonio Vivaldi, reinterpreted by Richter, who describes the composition as being "a display of love for a fantastic masterpiece." Richter mentions that the sound of the concerts remains 75% as imagined by pre-classical composer Antonio Vivaldi, but the rest is his own contribution, with elements of postmodern and minimalistic music in the rhythm and melodic line. Max Richter creates an original bridge between centuries, a dialogue between the traditional and the modern. He takes listeners on a fascinating musical journey, combining familiar sonorities with unknown and surprising ones and establishing links between ages, genres and styles.

The first time Max Richter's arrangements were heard was at the Barbican Center in London on October 31, 2012. They were performed by famous British violinist Daniel Hope. Four years later, violinist Franisco Fullana interpreted the works for the first time alongside Venezuelan conductor Carlos Izcaray. The Spanish violinist had this to say about Max Richter's work: "The four Seasons have given new life to my musical approach focused on instinct and emotion. They brought me back to my beginnings because, when I was a child, my family had a tape of Vivaldi's four pieces that we used to listen to in the car. While performing Max Richter's Seasons with conductor Carlos Izcaray, we both discovered that we shared the same energy and approach in interpreting music. It became clear that we both love this work so much and that we would interpret it again." So Francisco Fullana recorded this new version of the Seasons in August of 2017 and included it on his debut album. The style of the interpretation is modern, with a sound palette that is different from that of the 18th century, when Vivaldi's Seasons were composed. The timbre of the violin has a strong vibrato and is amplified, while the dynamic quality is underlined by unexpected sound effects and the tessituras become richer and more varied.

On Francisco Fullana's CD we also find the Royal Theme by Isang Yun, a composer who lived between 1917 and 1995 and combined the Western and Eastern musical traditions. Born in South Korea, he began composing at the age of 14 and studied at the music colleges in Osaka and Tokyo. After the time he was held prisoner by the Japanese army in 1943, he became a professor at the National University in Seoul. He spent the second part of his career in Europe, deepening his understanding of musical art as a student and then as a professor in Paris, Berlin and Hanover. Isang Yun was acknowledged both in Europe and the United States as a revolutionary composer who included elements of Asian tradition in his work. The structure of his music is always elaborate, heavily ornamented. Most of the composer's works are extremely difficult from a technical standpoint. This is also the case of the Royal Theme for solo violin composed in 1970, a passacaglia inspired by the Thema Regium from Johann Sebastian Bach's Musical Offering. In this work you will find a blend of musical styles, an inspired dialogue between the European and Asian traditions, but also a bridge between Baroque and contemporary music.

Francisco Fullana also included a chamber piece which he recorded with pianist David Fung, a musician born in Canada in 1983, regarded by the New York critics as a styled pianist with a clear way of expressing himself and having the qualities of a superstar. He was the winner of the prestigious competitions Queen Elisabeth in Bruxelles and Arthur Rubinstein in Tel Aviv. This is not the first time the two artists collaborate, as they have performed together in their debut recital at the Carnegie Hall in New York in 2016, an event that received an enthusiastic reaction from critics in the North American press. For their disc, violinist Francisco Fullana and pianist David Fung have chosen the Suite in the old style by Alfred Schnittke, a work suited to the idea that brings the album together, regarding the bonds between old and new, traditional and original. The work, written in 1972, is made up of five parts in the style of the baroque dance suites, which the composer also used as movie scores. The first two parts, the Pastoral and the Ballet, have sonorities characteristic of salon music and create an aristocratic atmosphere that is very well rendered by the two performers. The following Minuetto has a melancholic character and a slow tempo, with a heavily ornamented piano score. A Fugue in a counterpoint style comes before the last part, a Pantomime that features charming melodies interrupted only in the middle section by pizzicato, unusual and slightly staccato rhythms and dissonant, bizarre harmonies. Over the course of the entire Suite in the old style by Alfred Schnittke, violinist Francisco Fullana and pianist David Fung offer us an enchanting performance, elegant and perfectly balanced from a dynamic standpoint.

The disc ends with a piece by Salvador Brotons, composer, conductor and professor born in Barcelona in 1959, winner of many prestigious composition competitions. He has written over 150 works up until now, some influenced by the Catalonian and Mediterranean culture, some inspired by the Baroque tradition. This last category includes the Variations on a baroque theme for solo violin that are characterized by a simple and clean style. The composer initially keeps the original baroque melody, which he then varies by using elements of modern language. The balance between old and new is achieved by gradually removing techniques associated to the Baroque and by later returning to Bach's style in the fifth and sixth variations, as a tribute to the pre-classical composer's Sonatas and Partitas. The Variations on a baroque theme by Salvador Broton are performed by violinist Francisco Fullana and the Birmingham Symphonic Orchestra conducted by Carlos Izacaray with attention to the layers of sound and the counterpoint technique, in a convincing interpretative version.

The album Through the lens of time will be broadcast by Radio Romania Music on March 20, 21 and 22 starting from 11:30 on the CD Review segment of the show Arpeggio.