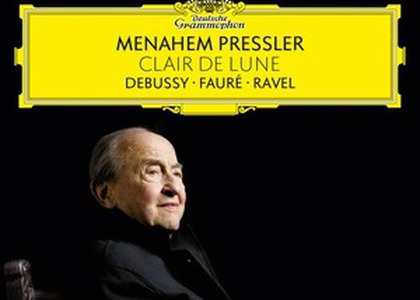 In the first months of this year, Radio Romania Muzical has already offered you some newly released discs dedicated to Claude Debussy, a composer celebrated this year, a century after its passing into eternity. Indeed, at the end of last week, on March 25, 100 years have passed since his death. As expected, record labels and performers, especially pianists, have marked this commemoration through various discographic appearances. The pianist we listen to interpreting Claude Debussy is Menahem Pressler, one of the world's longevian musicians, who is 94 years old. A venerable age that does not prevent him from continuing his discography and concerts. His new album, named Clair de Lune, is his first solo album for Deutsche Grammophon.

Born in a Jewish family in Magdeburg, Germany on December 16, 1923, the artist has had the opportunity to explore French creation since the study period. He was only nine years old when the Nazi authorities took over, so his family left Germany and settled in Palestrina, where the musician studied with Eliahu Rudiakov and Leo Kestenberg. At a time when he felt fascinated by the inventiveness of Claude Debussy's language and harmony, Menahem Pressler learned about the contest dedicated to the French composer in San Francisco, so he decided to participate, although his repertoire included only the songs Moonlight and Arabesques from Debussy's creation. The pianist explains: "I owe the love for Debussy to pianist Paul Loyonnet, who made tours in Palestine shortly after the war and who, in Paris, studied with Ravel's piano teacher. He met Debussy and worked with him. The lessons that Paul Loyonnet gave me opened a new world for me: I began to meticulously study all the dynamic features and the precise meaning of expressive indications in French music. Shortly, I learned how to read Debussy's songs." The depth through he approached the creation of the impresionist composer helped Menahem Pressler win the Debussy Contest in 1946, studying on that occasion all the solo piano works signed by the composer. Since then, the pianist's career has flourished, and in 1955 he founded the Beaux Arts Trio, one of the most valuable chamber ensembles of the last century, having indirect contact with Romanian music, as one of his band's partners was violinist Daniel Guilet, former student of George Enescu in Paris. Since 2008, when the Beaux Arts Trio has stopped working, Menahem Pressler has dedicated himself to the solo career, he has performed concerts and recitals in Berlin, Paris, Amsterdam, Chicago and Tokyo, and continued his discography projects.

His new album is a tribute to French music and composers who have marked his career: Claude Debussy, Maurice Ravel and Gabriel Faure. A music that the pianist says, "The beauty of the sounds, the poetry behind the music and the impresionist paintings speak to me even now. My love for this music has made me study it hard, with perseverance." The disc carries a special dedication to Lady Annabelle Weidenfeld, who is the manager of the pianist and who supported him in the last stage of his career. About their collaboration, the artist says: "I first met Annabelle when she was young and worked in London for the Beaux Arts Trio, the ensemble I founded. Later she moved to Madrid and she often invited us there to play. I dedicate to her my album with all my love and gratitude."

The first work of the album is Andante con moto from the Deux Arabesques set, a pair of tracks composed around the year 1890. Although it is written in its youth, the work exposes already timid musical ideas that would later define Debussy's creation. Exploring equally the tonal and the modal system, the work evokes scenes of nature with vivid melodic lines and serene harmonies, all rendered by the pianist Menahem Pressler with warm and refined sound. The work that gives the name of the Clair de Lune disc, inspired by Paul Verlaine's poem with the same title, is part of the Bergamo Suite, one of Claude Debussy's most famous works, composed in 1980. The sonorous images of the work are suggested with fine and blurred nuances by pianist Menahem Pressler. Then another creation of the French composer, La plus que lent, a waltz with the indication Molto rubato con morbidezza. The fluctuating tempo and vicious rhythms are the great difficulty of this piece composed in 1910, in which Debussy ironizes the tradition of fashionable waltz in French salons from the beginning of the last century.

From Claude Debussy's First notebook of Preludes, Menahem Pressler chose the Delfi Dancers, Voiles, The Sweetheart Girl, The Cathedrals, and Saltimbanci. About his repertory choice, the pianist says in the disc presentation material for Deutsche Grammophon: "First of all, I chose for this album five preludes that I love and that I sang a lot. They actually stood at the base of my repertoire. What is interesting about these Preludes is that the titles are always indicated by the composer at the end of the songs, which means that the pianist is free to understand and interpret them as he wishes. And at the end of the prelude, Debussy tells you: here's what I think about this piece, what I thought about when I wrote it."

Menahem Pressler included on his album also a work by Gabriel Faure, Bacarola no. 6 op. 70 in E Bemol composed and published in 1897, a work whose romantic discourse is impregnated by songs with an impresionist idea. The grace and voluptuousness of this piece does not contradict the composer's depth, and Menahem Pressler manages to balance all the aspects of the work. He adds to the charm of melodies, unexpected modulations and original harmonies that characterize the style of late creations signed by Gabriel Faure.

The last two pieces on the album belong to Maurice Ravel. The first is Pavana for a dead infant, one of the most famous piano compositions of the composer, written in 1899 and influenced by the musical style of Emmanuel Chabrier. It is a charming work, structured in simple forms, with delicate sounds rendered with a refined touch by pianist Menahem Pressler. The disc ends with the song Sad Birds from Mirrors Suite composed in 1905 and dedicated to Spanish pianist Ricardo Viñes, who presented it in the first audition a year later. The music of this work is a sad song sung by a lone bird, to which others join. There follows the effervescent middle part, interrupted by a solemn cadence that brings back the melancholic atmosphere from the beginning of the play, thus pianist Menahem Pressler ending the disc dedicated to the French impressionist creation.

The Clair de lune album recorded by Menahem Pressler will be on March 28, 29 and 30, 2018 at the CD Review, during Arpeggio, at 11.30.
Larisa Clempuş
Translated by Costache Alexandra Iuliana,
MTTLC, 1st year
Return to archived Clasic