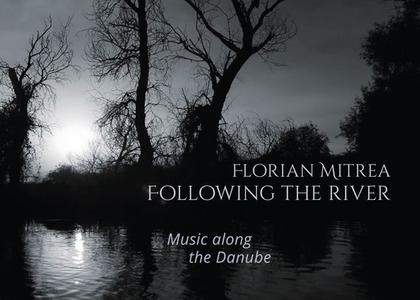 Following the Riveris the title of Florian Mitrea's debut disc. Florian Mitrea is a talented pianist with a rising career. He was born in Bucharest and has lived in the UK since 2008. Following the River - the name of this album alludes to the pitoresque images of the Danube. However, it's not only about the Viennese waltzes composed by the Strauss family - bright, joyful, with a harmonic tonal clarity - but about a music influenced by profane and sacred Eastern European folklore creation, with rich - sometimes strange - sound textures and asymmetric rhythms. When creating the repertoire, the pianist was inspired by his own childhood memories from the summers he spent in the Danube Delta, as his mother is from Tulcea, a town very close to the Delta. In the booklet, Florian Mitrea writes: "Some of the memories that are dear to me are the hot summer nights spent on a boat in the heart of the Danube Delta, just listening to the delicate whispers of the willows and the distant chirping of birds and counting the stars in the sky. I've always been fascinated by the Danube. This mysterious river unites peoples in Central and Eastern Europe and carries their stories, songs, dances, joys and sorrows. The music of the people living on the banks of the Danube is quite hypnotic through its expressive ability. I feel lucky I grew up in an area where music is still very alive and an essential component of everyday life. I was drawn to this enchanting musical universe for many years and Following the River is the result of my classical music education mingling with childhood interactions and folk musicians. I hope this album sends listeners on a journey as poetic and intense as life itself." These experiences and personal moments can be found in Florian Mitrea's performance. For this album, he chose works by Romanian composers, such as Sigismund Toduță, Paul Constantinescu and Radu Paladi, but also two pieces from the universal Romantic period fitting the artistic vision that gives the disc its unity.

The work that opens the album is the set of six dances in Bulgarian rhythm from the Mikrokosmos cycle by Bela Bartok, a composition which is difficult because it overlaps melodic and harmonic structures while having strongly dissonant accords and mixed rhythms, all this united by the specific Bulgarian modal perfume. If while performing the first piece of the set - in tempo rubato - pianist Florian Mitrea focuses on outlining the melodies and revealing their harmonic particularities, in the next three pieces - in toccata style - he gives a demonstration of agility and rhythmic incisiveness based on a flawless technique. The fourth piece is inspired by the music of George Gershwin, as it is clearly influenced by North-American jazz. The final dance is the longest of the set and it synthesizes the elements composing Bela Bartok's style. This last piece is similar in writing to the finale of the composer's Concerto no. 3 for piano and orchestra. The main theme is bright and rich in color and the rhythmic structures have a special energy. Pianist Florian Mitrea perfectly feels and reproduces these features of Bela Bartok's music and gives a charming performance.

The two Romantic works that appear on the album are the Hungarian Melody D. 817 by Franz Schubert and the Hungarian Rhapsody no. 5 by Franz Liszt. The first was composed in 1824, when the composer lived at the summer house of count Esterhazy. There, Schubert had the opportunity of getting to know the Hungarian musical folklore that inspired him in composing this charming Hungarian dancing melody, with repetitive rhythms and ornamented melodic passages. The music has an untroubled serene, slightly naïve atmosphere, different from the Rhapsody no. 5 by Liszt which, although inspired by Hungarian music as well, is elegiac in character and has a special richness of sound. Pianist Florian Mitrea's performance is introspective and intensely expressive - turmoil, resignation, melancholy, silence, longing, all this performed with poetic feeling and an ample dynamic and agogic palette.

The works of Sigismund Toduță (b. 1908, Simeria - d. 1991, Cluj-Napoca) have a special place on the album. The composer is representative for the Romanian musical culture of the last century. In his creation, the musician included folklore and religious melodies - Byzantine or Gregorian, arranged on the specific forms of European music, thus also showing elements of certain neo-Renaissance and neo-Baroque orientations. For his compositions, Sigismund Toduță received numerous awards - among them, the second prize for composition at the "George Enescu" competition in 1940, the "George Enescu" prize of the Romanian Academy in 1974 and the Prize of the Union of Composers and Musicologists between 1973 and 1983. From Sigismund Toduță's work, pianist Florian Mitrea chose three remarkable pieces for this album, different in character and harmonic and polyphonic approach: two religious works in arrangements for piano and orchestra and a profane piece with strong elements of Romanian folklore - the Song and Dance Suite. You will first listen to the Passacalia written in 1943, comprising 12 Variations on a Romanian carol, Doamne, Iisuse Hristoase (Oh, Lord, Jesus Christ), a song which is nowadays better known in the version arranged by Gheorghe Cucu. The work begins in an atmosphere of piety and devotion. The theme is exposed in delicate nuances and develops in a counterpoint and dynamic style to its climax in the last stanza, a musical moment that is festive and redeeming. Stretching for a total of seven minutes, this melodically and harmonically remarkable structure is expressively and flawlessly performed by pianist Florian Mitrea, who is obviously a passionate interpreter and scholar of Sigismund Toduță's works for the piano.

From the same composer, Florian Mitrea also chose the Song and Dance Suite, a collection written in 1951 that describes the rural universe through Romanian musical folklore. Pianist Florian Mitrea has this to say about the meaning of this work: "Growing up in a close relationship to the traditions of the Romanian village, I could see the role of traditional music as an irreplaceable part in the lives of the villagers. That is why, for me, Toduță's suite touches a sensitive and personal chord." Florian Mitrea sees the first part of the work as a lullaby, while the second reminds him of children playing. There are six more short songs and dances where folklore is present either as a quotation or recreated through specific elements of style. The melodies are supported through Renaissance or Baroque accord and counterpoint techniques. The work is written with unequalled imagination, with emphasis on rhythmic diversity. With Sigismund Toduță's Suite, Florian Mitrea has the opportunity of showing his exceptional qualities, his versatility, his rhythmic expressiveness, his subtle sound that is consistent both small and massive nuances, as he is capable of harnessing the piano's entire palette of timbres.

The last of Sigismund Toduță's work approached by Florian Mitrea is the Choral and Toccata. The pianist finds a very modern, quasi atonal, language in this work, but a very powerful expressiveness. The Choral, a profoundly religious composition, is based on accords that recreate the atmosphere of an organ cathedral. The piece ingeniously combines Byzantine and Catholic melodic elements, bell sonorities with Gregorian melodic intonations. The Choral is contrasted with the following Toccata, a piece in a fast tempo, with percussive rhythms that seem to imitate the whick in Orthodox monasteries. Over the course of the work we find echoes of Serghei Prokofiev's work with the same name, but Sigismund Todiță's stylistic signature is always present in the harmonic language and the rhythmic frenzy of the piece. The interpretation of this Toccata requires perfect piano technique and an infallible sense of rhythm, qualities that pianist Florian Mitrea undoubtedly possesses. He is a complex musician who has extraordinary artistic vision and creativity.

Paul Constantinescu's music is also featured on Following the River. Pianist Florian Mitrea has chosen the Variations on a Romanian Popular Song, an arrangement of the delicate melody Uite neica trece dealul and Game from Dobrogea. You can admire the melancholy and innocent performance of the first work in contrast to the latter, which is in a toccata style and reminds us of the rustic rhythmic pulsations in Bela Bartok's music. Dedicated to pianist Valentin Gheorghiu, this last piece is terribly difficult and makes Florian Mitrea's virtuosity shine.

For his disc, the pianist has also recorded a piece signed by Radu Paladi. Mitrea confesses that he is fascinated by the creation of the composer born in 1927 in Storozhynets, on the current territory of Ukraine. Radu Paladi studied the piano under Florica Muzicescu and wrote works in various genres, with a predilection for piano pieces. Just Florian Mitrea observes, Radu Paladi's music flows naturally and naturally builds emotions. His style is simple, inspired by the modalism and rhythmic structures specific to the Romanian folklore, and the musical language is pure and clear. We also find these features in Radu Paladi's Rondo a capriccio, which Florian Mitrea chose for his disc. The performance is effervescent, fresh, infectiously energetic. The pianist has an extraordinary agility, but at the same time finds the time to carefully and elegantly emphasize the particular elements of the melodic discourse.

Born in 1989 in Bucharest, pianist Florian Mitrea graduated from the George Enescu High School in 2008 and was awarded a scholarship by the Royal Academy of Music in London, where he studied under pianist and Professor Diana Ketler. He took part in master classes organized by grand masters of the piano such as Leif Ove Andsnes, Michael Roll or Stephen Hough. Florian Mitrea has won prizes in prestigious competitions such as the Beethoven Competitions, the ARD in Munich, the Hamamatsu Piano Competition in Japan and the inaugural edition of the International Music Competition in Harbin, China. He was invited to perform recitals and concerts in Romania and England, the country where he currently lives, but also in musical centers in Europe and Asia. Among those who have heard Florian Mitrea playing the piano is the famous Martha Argerich, who dubbed him "a sensational pianist" in an interview for Radio Romania Music.

Tune in to Radio Romania Music and listen to pianist Florian Mitrea's debut album on April 16, 17 and 18, starting from 11.30, on CD Review, during the show Arpeggio.