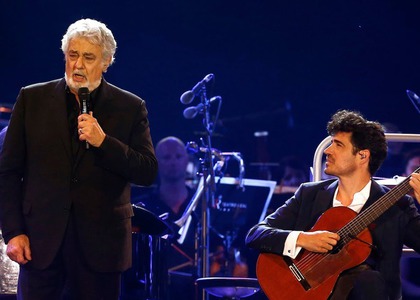 Disc preview before the official launch on 11th of May

At the beginning of this year Sony record company included a new name on the list of guitarists with whom they collaborate, namely Pablo Sainz Villegas. The Spanish musician was born in 1977. He released eight albums so far which include works by Heitor Villa-Lobos, Joaquin Rodrigo, Felix Mendelssohn, and Luciano Berio. However, the first CD he has recorded since he signed the contract with Sony is the album called Volver, which will appear officially in just four days, on 11th of May. Pablo Sainz Villegas recorded the disc alongside the well-known tenor Placido Domingo. The two musicians have been singing together for several years; their first concert took place on the tenor's 75th anniversary, when they sang at the Santiago Bernabeu Stadium in Madrid in front of an audience of over 75.000 people. Placido Domingo considers Villegas an accomplished guitarist and the later shows his profound admiration for the well-known tenor, telling that the time spent with Placido Domingo is truly inspiring. The disc they recorded together was born from their common passion for the Latin American, Spanish, and Portuguese repertoire. Thus, for their album they have chosen tango, romance, songs from zarzuela, songs with traditional Latin perfume, written during the last century - music full of nostalgia and emotional intensity.

Tenor Placido Domingo needs no further presentation as he is one of the most famous artists in the world. As for guitarist Pablo Sainz Villegas, he is a talented and creative musician on his way to greatness. He was born in Logrono, Spain, and moved to New York, he studied at the Conservatory in Madrid, at the Hochschule für Musik "Franz Liszt" in Weimar and at the Manhattan School of Music. Admired by The New York Times contributors for the beauty and the fullness of his instrument's sound, Pablo Sainz Villegas debuted as a soloist of the New York Philharmonic under the guidance of Rafael Fruhbeck de Burgos, at the Lincoln Center. The success of that concert was so great that the guitarist was invited to play in over 30 countries, with symphonic orchestras in San Francisco, Boston, Los Angeles, Pittsburg, Copenhagen or Lyon. Over the years, the artist has developed clear repertoire preferences, he promoted classical works from the contemporary Spanish creation, performing for the first time ever works by composers such as Tomás Marco, Lorenzo Palomo, Jacobo Durán Loriga and Carlos Blanco Ruiz.

You can listen to the live release of the album Volver at Radio România Muzical radio station on 7th and 8th of May 2018, from 11.30 am, during CD Review, part of the Arpeggio show.