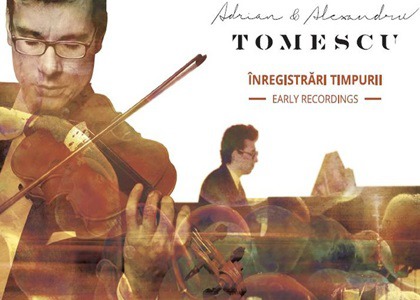 ...an album with great emotional resonance for the protagonist, violonist Alexandru Tomescu, but also his loyal audience. The album gathers some of the pieces recorded with his father, the late pianist Adrian Tomescu, between 1994-2002, recordings kept in the Romanian Radio archive and produced by Casa Radio Publishing House. Titled 'Early Recordings - Adrian and Alexandru Tomescu', the album was officially launched in October 2018.

Impressive from its very first bars, this violin - piano musical performance reveals an amazing musical bond between father and son. We are talking about one of the best accompanists Romania has ever had, a pianist mentored by Florica Musicescu, Cella Delavrancea, by Gheorghe Halmoș and the 'Ciprian Porumbescu' Conservatory of Music in Bucharest, followed by classes at 'Franz Liszt' Academy in Weimar. Of course, as a teacher, Adrian Tomescu's first student was his son - what an honour to be educated, musically speaking, by your own father, just like the ancient masters who passed down the secrets of their craft to their sons! What a beautiful thing to see the son on stage, expressing his feelings about losing his father. Adrian Tomescu passed away on the 13th of May 2009.

Alexandru Tomescu, currently concert soloist of the National Radio Orchestra, a symbol of the music industry, reveals at the launch of his album that 'this was a dream my father hadn't been able to make true in his lifetime, so the responsibility to fulfil his wish after his death was this much greater.' In other words, it is an opportunity for us to marvel at young Alexandru Tomescu's artistic development, from his high-school years thanks to a 1994 recording of the Seven Spanish Folksongs Suite by Manuel de Falla, perfectly performed with pathos and a true Latin emotional sensitivity. The album is extremely generous in terms of stylistic versatility - from the 'La follia' Sonata op. 5 no. 12 by Arcangelo Corelli, recorded in 1997, to the Six Romanian Folk Dances by Bela Bartok, recorded in 2002.

Listening to this album, we see the perfect ratio between the piano accompaniment and the solo violin, the elegance and the smoothness of the piano, which shapes and contours the atmosphere required by the musical score. On a general note, one can feel a sense of trust, care, and that familial link that create a matrix, allowing for some amazing artistic opportunities. Having his father as mentor, the son soars to the highest spheres of musical performance, free, uninhibited and blissful in this enviable state.

Throughout the album's, we can see the romantic part of the repertoire performed by the two artists, starting with the Elegiac Poem op. 12 by Eugene Ysaÿe, recorded in 1990. This is the year Alexandru Tomescu graduated from the National University of Music Bucharest, where he studied under master Ștefan Gheorghiu. This was also the year he won the first prize at the 'George Enescu' International Contest, the second prize at the 'Yehudi Menuhin' competition and the special SACEM prize for the best musical performance at the 'Marguerite Long - Jacques Thibaud' contest in Paris. The next track is Sonata No. 2 op. 100 in A Major by Johannes Brahms in a very fluent and emotional interpretation, conveyed genuinely by the two artists, followed by Fantasie op. 131 in C Major by Robert Schumann.

The album also mirrors the dialogue between Adrian and Alexandru Tomescu - two musical celebrities communicating with great sensitivity and extreme authenticity. Their exchange involves support, trust, musical know-how and a deep understanding of the real message of music, when the artist breaks free of the scholarly side of music and transcends to the highest forms of spirituality. Alexandru Tomescu was lucky enough to experience this side of music and learn from his father from the beginning of his formative years.

We detect that the album aims to honour the memory of the late pianist and professor Adrian Tomescu, here as an accompanist to his son, in the album's beautiful presentation. Beyond words, we can admire some photos from the Tomescu family's archive, styled in hues of sepia, somehow conveying the special bond between father and son. Equally, the album also makes the most of the admirable beginning of Alexandru Tomescu's career.

Remember this title - ' Adrian and Alexandru Tomescu - Early recordings', an album which will surely take the centre stage in the discography of the Romanian violinist, Alexandru Tomescu, beyond the powerful emotional impact, which is absolutely natural when it comes to him.