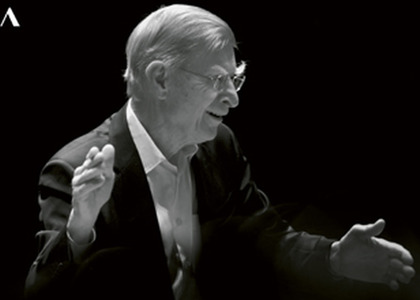 The Accentus Music Record Company from Leipzig released a Mahler album this summer, recorded in June 2018, at Bamberg Symphony Orchestra, led by Herbert Blomstedt. It's about Symphony No. 9 in D major. The subject matter is huge, whether we mean the profile of this opus with significance of a great depth, or the conductor's posture, who was 91 years old on the recording date, or even the quality of the album.

All these topics generate a good set of superlatives. Let me begin with a question asked by a columnist/chronicler who had written on this topic: How is it possible for a city of 70.000 inhabitants to have such a good orchestra? And we understand here what is the significance of a tradition. The orchestra dates back to 1946, when it was established by receiving refugee musicians of the Prague Symphony Orchestra, so that it becomes a filiation right in the centuries in which Mozart and Mahler lived. (sau right in the lifetime of Mozart and Mahler.)

Talking about Herbert Blomsdedt - "An old maestro portrayed in a gold frame" - as in the title of the article dedicated to him in the album's booklet, he has conducted more than 200 concerts from the orchestra's rostrum, the Symphony No. 9 by Mahler being the only one recorded - a unique possibility/occasion for the high-profile collectors. Having been Honorary Conductor since 2006, he comes with an invaluable experience, starting with his admiration for the ensemble, which is, in fact, mutual. And everything transpires while listening to music. Herbert Blomstedt offers this essentialization of the ideational content, precision in the problem formulation posed by the hard-to-reach score, and finally, the competence and authority gained by more than six decades of experience. All these are extremely self-demanding.

What we will be listening to in the next 80 minutes is included in the category of the musical event - a declaration? of an astounding complexity, which emits force, thrill, but also moments radiating unearthly beauty. Because this is the message of the music. Symphony No. 9 by Gustav Mahler starts with an andante of a great complexity and amplitude, crosses the next two parts in the rhythm of a landler and that of a burlesque rondo, in order to end absolutely atypically in an adagio, the famous adagio, of which was said that it represents Mahler's detachment of everything that is terrestrial, his access towards a different dimension. An interpretative and spiritualized approach is expected in this adagio, and the variant taken as a standard (yardstick) is that of Herbert von Karajan, on the rostrum of Berlin Philharmonic, also a live recording, of 1982. By comparison, Herbert Blomstedt bring a hue of bright serenity, of acceptance, it's a portrait of a character who is at peace with himself, and with what is to be. We should retain that it is the last complete symphony composed by Mahler, having a worrisome message noted in the score: "Youth! Gone! Love! Blown away!". Nothing is blown away when it takes a new shape in the harmonies of a creation which becomes a presence (in) itself, and is constantly accessed. This Symphony No. 9 by Mahler has been issued as a cd/vinyl in 95 versions so far, including this one, a new success of the Bamberg Symphony Orchestra led by Herbert Blomstedt. Enjoy the listening.

We retain this album released by the Accentus Music Record Company on June 21st, also included in the "Records of the year 2019" project at Radio Romania Music.