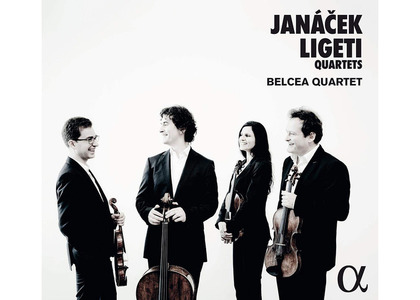 "I imagined a poor, distressed, devastated woman, like the one described by Tolstoy in the Sonata Kreutzer short story" - are the words of Leoš Janáček about his first string quartet, entitled exactly Sonata Kreutzer. This is the first composition from the contents of the latest album released by the Belcea String Quartet, on the 26th of April, 2019, under the aegis of Alpha Logo. Of course, we are following, with great interest, every new discographic appearance of this ensemble, conducted by the 1st violin Corina Belcea, an artist formed in the class of maestro Ștefan Gheorghiu, and then, at the Royal College of Music in London, where she worked with Felix Andrievsky. The Belcea Quartet started during faculty time. It celebrates now the 25th of its existence, and a career of a great, international amplitude. But les us focus on this new album, which comprises the first two string quartets by Leoš Janáček, and the String Quartet No. 1 (Metamorphoses Nocturnes) by György Ligeti.

We must confess that we don't listen to the Leoš Janáček quartets on a daily basis, and even less often to those by Ligeti. Therefore, the album proposed by the Belcea Quartet attracts us even more, through the reputation and the power of persuasion of the four musicians, to the less accessible places of the 20th century music, although, in the case of Janáček, we speak about the second decade. But its music, out of the patters of the classical alphabet, is like a continuous flow of ideas, a perpetual development, a narrative which feeds itself on the rhythmic motifs, repeated obsessively, until it reaches an unprecedented intensity of the musical discourse.

About this concentration of expression also speaks the violinist Corina Belcea, in the presentation of the String Quartet No. 1 by Leoš Janáček: "A magnificent work, which goes to the absolute extreme, both as emotion and technic for a string quartet. The Quartet's sonority, especially at its peak, goes much further than we can imagine in that sense, it has a symphonic dimension". We shall not forger the source of inspiration - Tolstoy's short story, in which the heroine accompanies on the piano the violinist, in the Sonata Kreutzer, arousing that way her husband's jealousy, who kills her, eventually.

The Belcea Quartet is relentless in the rendering of the score's narrative, it snatches the music off of its dramatic potential, through the bluntly statement, formulated acidly, with an impeccable intonation and a ferocious implication. I am speaking about pathos, about the way the four musicians radiate the pain, but also the moments of certain beauty, which you will discover, I hope, while listening this quartet.

The material received beautiful reviews by the critics: "The interpretations of the Belcea Quartet are courageous, rustic, they have a raw, relentless character, pushing the tempi and rubatoes to the extremes. It's equally exciting and strange", writes Rebecca Franks, in the BBC Music Magazine. The Strad also comments: "the interpretations are restless and captivating, which surprise and enchant at the same time."

I shall mention that this is the second version of these quartets, which Corina Belcea performs in the formula: Corina Belcea - the 1st violin, Axel Schacher - the 2nd violin, Krzysztof Chorzelski - viola, and Antoine Lederlin - cello. They come with great experience, acquired on the concert stages and recording studios. I remind you the extremely successful complete Beethoven string quartets, which they have recommenced playing in a new series of concerts, or the complete Bartok string quartets, which had aroused everyone's admiration. The String Quartet No. 2, entitled Intimate Letters, keeps the same amplitude. It was inspired by the correspondence between Janáček and Kamila Stösslová - his muse, younger by 38 years...

Strong feelings, born from a platonic love. In one of these letters appears the confession that this quartet is the first composition conceived directly from the experience of these feelings. We can discover the same energy and transparency in the performance of the musical text, the intimate letters interpreted with an intense passion, with the fervour and ardor coming out of the despair of an impossible love, shaped in the modernist fashion of the 20th century, maybe sometimes with asperities which are hard to understand, but definitely trenchant.

The album ends with the String Quartet No. 1, entitled "Nocturnal Metamorphoses" by György Ligeti, which, in the opinion of certain critics, is an unequalled recording, as a value, the fact that places it at the top of the existent versions' hierarchy. You will listen to it on a different occasion. Remember this album: "The Belcea Quartet - Janáček - Ligeti" - of a modernity we must assimilate. The album is included in the "Recordings of the Year 2019" project, at Radio Romania Music.