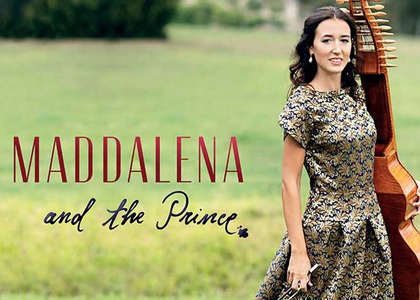 Maddalena and the Prince is the third album by Maddalena Del Gobbo. She's an internationally renowned interpret, who plays viola da gamba. An artist of Deutsche Grammophone - the label under the aegis of which this album was released on the 27th of July, 2019. Beyond the quality of this material - certainly recorded impeccably - I shall tell you about the instrument, which Maddalena Del Gobbo plays this time - the baryton, about the accomplishments of this Italian origin artist, and last but not least, about the original music she proposes.

Maddalena and the Prince - the title stands for the profile of NikolausEsterházy, a great music lover and the patron of Joseph Haydn, passionate about this instrument - baryton, and ordering a series of works specially meant to be performed by Haydn himself. Hence all this repertoire: trio sonatas and Divertissements composed by Joseph Haydn, Andreas Lidl, Franz Xaver Hammer, and Luigi Tomasini, members of the Esterházy's Chapel, with the exception of Haydn, who was the Kapellmeister.

A few words about this historical instrument, included in the viola family (we call it viola da gamba), resembling it by construction, but having an extra set of strings, which comes into resonance with the main ones, when put into vibration by a bow. This extra set of strings can be pinched, or just simply ignored, depending on the composer's intention, but it contributes to the special quality of the sound, comes into resonance, and amplifies it. It's a very elegant instrument, with an arched and carved head atop the neck, used until the XVIIIth century, and once again, with the establishment of the historical interpretation movement in the XXthcentury. Maddalena Del Gobbo joins this movement, and promotes the old instrument in this latest discographic release. She considers the baryton to be the "prince of the instruments", with six gut strings, nine resonating strings made of metal, a carved head atop the neck, delicate ornamentation, and a noble, graceful sound.

Joseph Haydn is the one who has composed the most works for baryton, at the request of the Prince Esterházy - more than 175, out of which 126 are trios for baryton, viola, and cello, written until 1775. From the album's presentation we may also find out that the composer was practicing stealthily at night, only to meet his patron's requests.

The baryton is a rarely recorded instrument nowadays, and that's why this repertoire is unique, exquisitely interpreted, with the sensitivity and care for details of an artist specialized in old music, opening a new chapter through these works of the Viennese Classicism period. Of course, her already gained experience in old music speaks through the approach of the attack, clarity, and the manner of the musical phrase construction. The album was recorded right in the Haydnsaal from the Esterházy Palace in Eisenach. The artist talks about the magical atmosphere of the place, about the recording moment, an unforgettable experience for her, highlighting the prince's passion for this instrument. It's said that this passion had lasted for ten years, after which the attention of NikolausEsterházy was focused on other areas. But it was enough, in those ten years, to appear an entire outstanding repertoire. In this album, besides the trios and Divertissements by Joseph Haydn - the most valuable, of course - and the Trio in C major for baryton, viola, and cello by Luigi Tomasini (the concertmaster of the Esterházy Chapel), Maddalena Del Gobbo comes up with Sonata for Viola da Gamba and Harpsichord by Franz Xaver Hammer (the soloist cello of the same ensemble), the only one that brings a sonority change in this material dominated by the baryton trio, viola, and cello, and a Divertissement by Andreas Lidl, a virtuoso of the baryton and viola da gamba, hired at the Eisenach Court between 1769-1774, a period in which he took lessons of composition from Haydn.