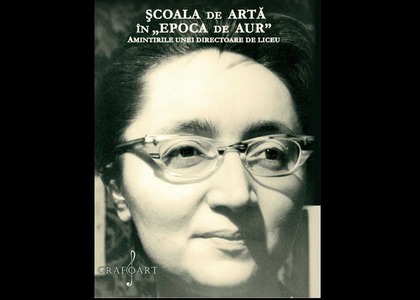 Throughout history, totalitarian regimes have sought to control society at all levels, especially when it came to the educational level, even the vocational one. In Romania's case, the communist period depicted distortions of information, and the propaganda tools used the arts for the celebrations dedicated to the party and its leaders.However, there were a few cases which proved that "rays of light" can cross the "cultural darkness", as we can find out from the events reported in the most recent book signed by Lavinia Coman.

Published in 2019 by the GRAFOART Music Publishing House, the volume The art school in the "Golden Age". The memories of a high school female headmaster reveals details inside the educational system during the communist period, from the perspective of Lavinia Coman, who was the headmaster of "George Enescu" High School of Art between 1981-1987.From the first lines, the author reconstructs the tense atmosphere of those times, when obtaining a job depended, to a significant extent, also on the family history.Further, Lavinia Coman describes a state of permanent anxiety, caused by the abuses of the system, by the hostility manifested by some members of the School Inspectorate leadership, by the material shortcomings within the educational institution, but also by the fear of "anonymous" sent to the Ministry.Along with the fragments that describe the administrative aspects in detail, sometimespages of directives from the Central Committee of the R.C.P (Romanian Communist Party), addressed to those interested in this type of historiographyalso appear.

Aside from these negative aspects, readers have the chance to learn about the many achievements of the students of the "George Enescu" High School of Art.The author insisted especially on the presence at national and international piano competitions, which she related through some diary pages, in which we find brief moments of sometimes acid musical chronicle.At the same time, the affective attachment to her students is often transposed in the tone she used, but without going beyond the frame of a professional judgment. Lavinia Coman also mentions her activity as a performerduring that time, focusing largely on the creation of lied of Romanian composers.

Thirty years after the 1989 Revolution,the blackness of time begins to cover many deeds from the communist period. A volume like The Art School in the "Golden Age". The memories of a high school female headmaster by Lavinia Comanhas the quality of keeping these memories, which record the mistakes of the past so that they won't be repeated.Skilfully choosing suggestive titles, the author carries the reader through the various aspects of artistic education from the 1980s, highlighting both the negative and the positive sides.Although the autobiographical character of the book may raise the issue of subjectivism in expression, the passage of the time has proven that many students described by Lavinia Coman represent nowadays the core of the Romanian cultural life, some of them choosing a pedagogical career as well.