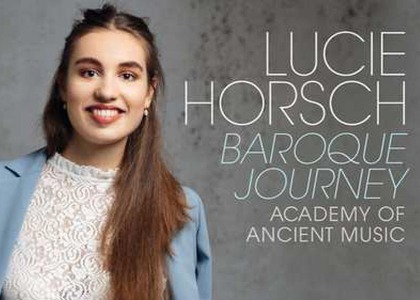 Lucie Horsch is a very young recorder performer, and I can say that this new wave appeared in this field of old music. After a first Vivaldi album, she proposes "Baroque Journey", under the Decca logo, album which was released on February 22, 2019, and which was very well received by critics.

The material was created with the help of the Old Music Academy conducted by Bojan Čičić (who offers the ideal framework in terms of historically argued interpretations), together with Thomas Dunford, playing the lute and Charlotte Barbour-Condini, also a recorder performer from the new generation.

We can all see the marks of a very successful international career. What is impressive is that Lucie Horsch is only 19 years old. She is of Dutch origin, started playing the recorder at the age of 5. In 2014, she represented the Netherlands in the "Eurovision Young Musician Contest", two years later she won the Concertgebouw Award for young talents in the presence of conductor Sir John Eliot Gardiner, having already toured in Norway, Switzerland, Austria, and Canada. In 2016, she became the first recorder performer, who signed an exclusive contract with Decca Records. The talent, the extraordinary technique, the ease with which Lucie Horsch has mastered this old instrument are all over the place. She set out to change the perception that it would be good just to learn the basics of music. I quote from an interview: "There are 500 different fingerprints, so you can color an interpretation according to different choices. The vibrato offers a different level of expression. Even if the recorder has a lower dynamic range than the violin or the cello, the potential for expressive detail and shades is huge. "

In the "Baroque Journey", we are invited to travel along with some great musical cultures. The prologue and the final retain solo miniatures from the " The Flute's Garden of Delights" Collection by Jakob van Eyck. Between these pages, all the importance is given to Johann Sebastian Bach, well represented by the BWV Concert 1059R in Re Minor adapted to the context. Lucie Horsch offers a relevant vision. The white, vibrato-free line of the solo in the "Erbarme dich" area of ​​" St Matthew Passion" is purified by any ballast, reduced to the essence for the "Badineria" in Suite No.2 BWV 1067 in and Minor for the orchestra to be an explosive replica of virtuosity and playful spirit. The Dutch artist also offers the best-known Concert for recorder soprano, chords, and continuo by Giuseppe Sammartini, with a medium part of great expressiveness. There are also small pieces, "Couplets de folies" by Marin Marais and "The Nightingale in Love", from The 14th Order of François Couperin - a welcomed timbre change, with Lucie Holsch being accompanied by Thomas Dunford, "an Eric Clapton of the lute" as said by BBC Music Magazine.

The musical discourse is composed according to a natural cursiveness that can only conquer. Lucie Horsch conveys joy, leaving you feeling that for her, it is no effort to cross this repertoire, so diverse in its baroque coordinates. She is playing with the dexterity of an experienced master, with brilliance, talent, and easiness. The album is crossed by a luminous ambiance, it is the kind of music that changes your inner state, if the frequencies are grave. And if you know a bit about the Baroque repertoire, you will rediscover in this Baroque journey the most priceless pages, the ones you constantly come back to, because it gives you a remedy against everyday convulsions. But you are also given the joy of browsing new pages - for example, a first-ever concert adapted for recorders after the Concerto No. 1 in D Major, op. 17 for flute and orchestra by Jacques Christophe Naudot.

I highly recommend this album "Baroque Journey" featuring Lucie Holsch, an artist who has already succeeded in establishing herself in such a competitive field, not only because of her native qualities and implicit perseverance, but especially because of the passion with which she presents her instrument. "I love the pure, authentic sound, it's so beautiful and vulnerable. And because you blow directly into the instrument, everything you do can be immediately noticed. For me, it's the closest instrument to the human voice" ... Lucie Holsch, harmoniously accompanied by the Academy of Old Music, with Bojan Čičić in musical management, a violinist and Croatian conductor specializing in old music.

Keep this title in mind: "Baroque Journey" for the Discs of the Year Project 2019 on Radio România Muzical.